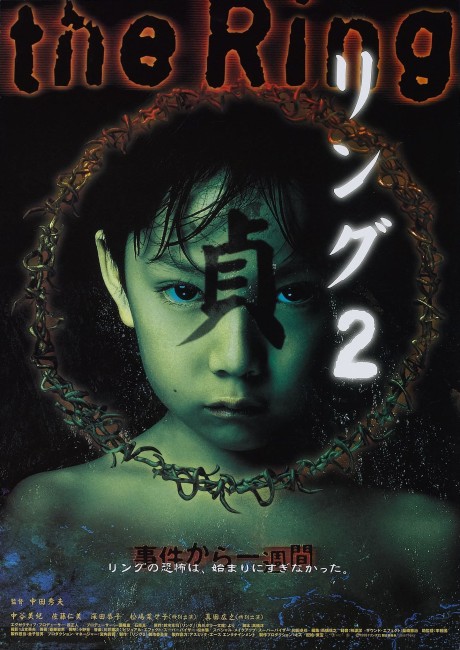 Mai Takano, the girlfriend of Ryuji Takayama, is drawn in as journalists and the police investigate the deaths surrounding the cursed video and the disappearance of Reiko Asakawa and her son Yoichi. In a psychiatric hospital, Mai finds Masami Kurahishi, witness to one of the original attacks, and watches as Masami spontaneously manifests images from the cursed video on televisions around her. Mai finally finds Reiko – only to discover that her son Yoichi has been taken over by the spirit of Sadako and has vast psychic powers. A psychiatrist decides to conduct a dangerous experiment using Yoichi in which he will try to drain Sadako’s malevolent energy into a pool of water.

Ring (1998), a film about a haunted videotape, was a massive hit in Japan. Its success spawned two sequels, along with the simultaneously released The Spiral (1998), which is unrelated to this, and was followed by a prequel Ring 0: Birthdays (2000), a tv series, a South Korean remake and a Hollywood remake The Ring (2002). Ring‘s success is probably overrated. It was a relatively crude film that had one or two decent shocks and a good central idea. Ring 2 however is one example of a sequel that manages to improve over the original.

Ring 2 follows on closely from the end of the first film. Where the first film started out with an intriguing idea about haunted videos but sidetracked off into a routine murder mystery, Ring 2 is more successful in expanding both ideas and integrating and making more sense of the two with talk about psychic photography and malevolent evil lurking beyond the grave.

That said, Ring 2 is also a totally incomprehensible mishmash of plot elements that throws in everything from psychiatric patients, children with psychic powers, possession, spirit photography and videography, ghosts and hauntings, a parapsychologist trying to rationally explain away the haunting while setting up equipment to drain away the evil, more haunted videos and a return visit to the well. It is a film wholly of effect, never of explanatory rationale.

Nevertheless, Hideo Nakata has improved his directorial style considerably since the first Ring, which often consisted of crudely emphatic shocks. With Ring 2, he frequently achieves an atmosphere of genuinely unworldly spookiness. There are some extremely eerie moments – the interview with the girl on the videotape that gets caught in a loop and slowly morphs into Sadako; the eruptions of psychic violence that take over the hospital and the laboratory.

There are at least two great scenes – one with Nakatani Miki’s attempt to climb up out of the well as Sadako emerges from the water and starts coming after her; and another scene with the manifestation of the ghost of the mother where a mirror eerily keeps flipping position back between her and Sadako. Like the first film, this also has an eerie score that adds much to the atmosphere. In Hideo Nakata’s creation of a film that makes no narrative sense whatsoever but exists wholly as a vehicle to produce unworldly scares, the film that Ring 2 most resembles is Don Coscarelli’s Phantasm (1979).

Ring 2 was later loosely remade as The Ring Two (2005), a sequel to the American remake, which was also directed by Hideo Nakata. These were followed a few years later by two further Japanese sequels Sadako 3D (2012) and Sadako 3D 2 (2013), followed by Sadako vs Kayako (2016), a crossover with the Ju-on/The Grudge series, and Sadako (2019). There was also a further English-language sequel with Rings (2017).