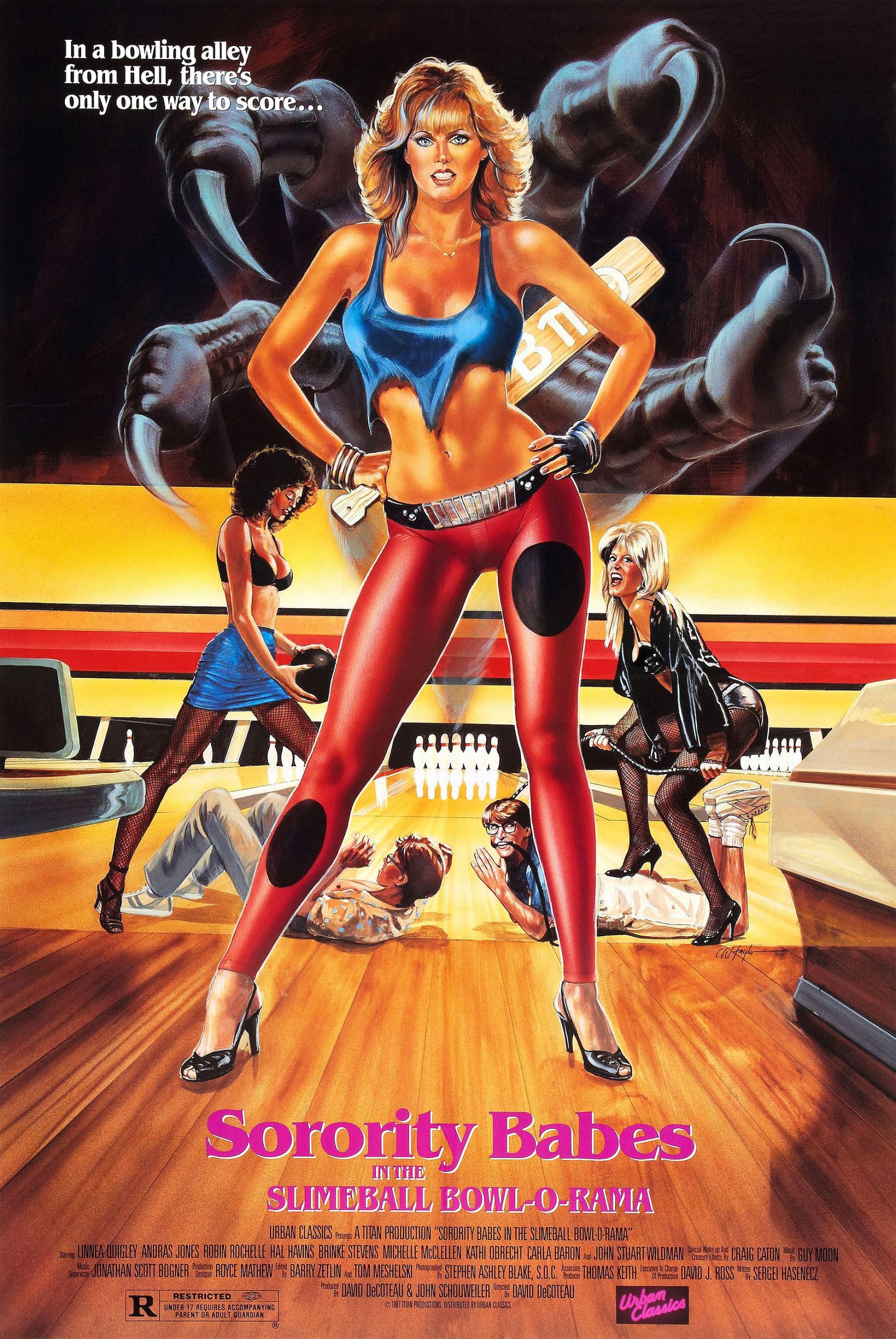 Three geeks sneak into the Tri Delta sorority to watch as two pledges, Lisa and Taffy, are being initiated. They are discovered peeking at the girls in the shower. In punishment, they are sent along with Lisa and Taffy as they are ordered to steal a trophy from the bowling alley at the Plaza Camino mall as part of the initiation. Unknown to them, the mall is owned by the sorority leader Babs’ father and the girls are planning some nasty surprises. There they also encounter Spider, a thief who has broken into the bowling alley. When they knock over the bowling trophy they unleash a demonic imp that has been trapped inside. It offers the group a series of cursed wishes, while turning the other sorority sisters into zombies.

Sorority Babes at the Slimeball Bowl-O-Rama may be a strong contender for one of the great exploitation titles of all time. (Director David DeCoteau claims that the title came from the winner in a contest held by Charles Band). Sorority Babes came out in the mid-1980s just when the vogue for making cod bad 1950s B-movies and the strongly intertwined Scream Queen fad was gaining strength. Sorority Babes at the Slimeball Bowl-O-Rama was directed by David DeCoteau, a director who has made a good many bad films, both unintentionally and deliberately, down the low-budget end of the market. (See below for David DeCoteau’s other films).

Sadly, the attention-getting title is the best thing there is about the Sorority Babes at the Slimeball Bowl-O-Rama. Needless to say, there is little in the film that comes with any of the cocky verve that the title suggests. The film is cheap, badly made and particularly badly acted. David DeCoteau’s pace is pedestrian and the film criminally dull. At most, it descends to much campy overacting. The puppet effects, which have bizarrely been voiced over with what sounds like a hip streetwise Black man, look extremely cheap and the zombie effects even cheaper.

David DeCoteau was one of the prime instigators of the Scream Queen fad and Sorority Babes at the Slimeball Bowl-O-Rama features two of its most prominent names – actresses Linnea Quigley and Brinke Stevens. Expectedly, all the women in the film take the opportunity to disrobe at least once and DeCoteau contrives an entirely gratuitous scene where the guys peep in on Brinke Stevens showering and washing whipped cream off her body. There is an amusing performance from C.D. LaFleur (in actuality Hollywood big guy George ‘Buck’ Flower hiding under a pseudonym) as a deaf janitor.

There was a sequel, produced by David DeCoteau, with Sorority Babes in the Dance-a-Thon of Death (1991).