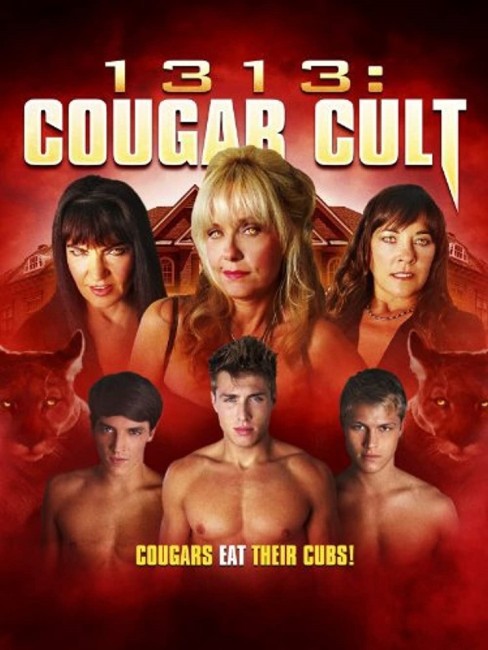 Three college students, Rufus, Darwin and Coopersmith, apply for jobs working for three middle-aged sisters, Edwina, Clara and Victoria, at their luxury home in Malibu. The sisters are advertising for the live-in positions of cook, pool cleaner and masseuse. The guys are instantly hired without even a glance at their references. What the guys are not aware is that the three women are were-cougars and are hungry to feast on young meat.

David DeCoteau is a prolific B-budget director. He came to prominence in the midst of the video era of the 1980s. He began working for Charles Band at Empire Productions and continued at Empire’s successor Full Moon Productions. There he made a steady output of low-budget horror and occasionally science-fiction films with titles that include Creepozoids (1987), Sorority Babes at the Slimeball Bowl-a-Rama (1988), Puppetmaster III: Toulon’s Revenge (1991), Beach Babes from Beyond (1993) and Test Tube Teens from the Year 2000 (1994), among others. Since the 1990s, DeCoteau began to specialise in a series of genre films made with a homoerotic bent. DeCoteau currently has over 160 films to his name (frequently made under a bunch of different pseudonyms). A full list of DeCoteau’s other genre films can be found at the bottom of the page.

Here DeCoteau reunites with Linnea Quigley, Brinke Stevens and Michelle Bauer, who were at the forefront of the 1980s Scream Queen movement. DeCoteau had directed each of them individually in various films during the 80s period. Here the three are into their mid-fifties (in the case of Brinke Stevens getting closer to sixty). The title is a play on the term ‘cougar’, which in the internet era has come to mean an older woman dating a younger man, aggressively pouncing on them as a cougaris reputed to do. DeCoteau runs with this and literally has the three actresses become were-cougars. The transformation effects look utterly cheap – no more than cougar (or what looks more like a tiger) masks unsteadily visually superimposed over the actresses’ faces.

From around 2000, David DeCoteau pivoted away from making B movies for people like Charles Band and began to specialise in his own brand of low-budget horror films that all came with a focus on softcore gay content. DeCoteau peoples film after film with good-looking young men who quickly strip their shirts off. The opening scene here, for instance, features Carey James taking a shower where the camera spends about five minutes watching him soap up his muscular torso (apparently without using any soap – and no shots that go beneath the underwear line). Elsewhere the film is filled with scenes that spend several minutes at a time watching the guys take showers, lying on beds caressing their bodies as they sleep, or hosing themselves down by the pool.

The film has been cheaply shot – it looks exactly as though DeCoteau obtained the location of a Malibu mansion and shot everything in and around there in 2-3 days. The drama in the film is repetitive and consists of little more than shots of the three sisters endlessly walking by the pool or through the house with intent and of the guys showering, in bed etc. Even then, Linnea Quigley was suffering from food poisoning and her scenes had to be shot separately – in most of her speaking parts she stands on her own, while the other two deliver their dialogue in a different camera set-up.