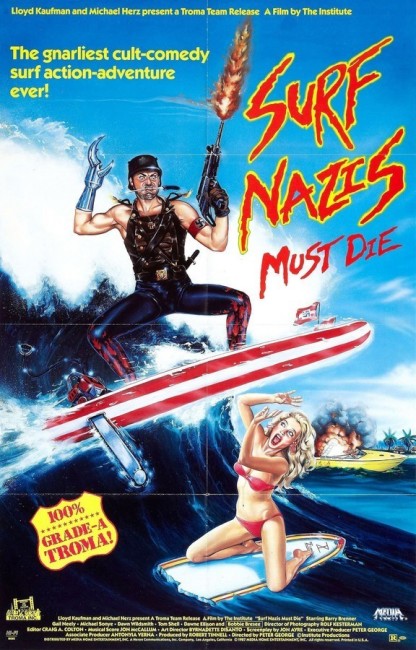 The Big Earthquake has hit California and America has dissolved into anarchy and lawlessness. A gang that call themselves the Surf Nazis claim the beaches as their own and conduct a ruthless campaign of violence and mugging, vanquishing all rival surfer gangs. However, when the Surf Nazis kill the only son of Eleanor Washington, she sets out the vengeance trail with her Baretta.

Troma Films have managed to corner a slice of the market with their brand of no-budget, campily absurd tongue-in-cheek splatter and bad taste films. These include the likes of Blood Sucking Freaks (1976), Class of Nuke ‘Em High (1986), The Toxic Avenger (1984) and sequels, Chopper Chicks in Zombie Town (1991), Poultrygeist: Night of the Chicken Dead (2006) and numerous others. They released Surf Nazis Must Die amid an amusingly tongue-in-cheek ad campaign by outrageously lobbying for its nomination for that year’s Best Picture Oscar.

Surf Nazis Must Die, which was independently produced, is a better film than many of Troma’s in-house productions. Like most Troma items, the poster design is more interesting than the finished product – here the film seems to promise to be a tongue-in-cheek Mad Max 2 (1981) of the beachfronts, a concept the resulting film never quite delivers on. The plot is instantly forgettable, and the acting, particularly of lead actor Barry Brenner, is so bizarre as to guarantee hysterics. Gore – various decapitations, heads blown off, wounds being stitched up shown in closeup – has been used as a buttress whenever the pace is in (frequent) danger of flagging.

The film remains commendable for its sheer persistence, perversity and overall tone of over-the-top lunacy. Dawn Wildsmith, who gives the best performance as Adolph’s girl-friend, gets all the best lines: “Scum-sucking Neanderthal, how dare you question my authority?” or “I’m Adolph’s bitch – get yourself another cunt.” And then there’s imposing black mama Gail Neely who walks up to a gunsmith and demands “something to blow honky hide off at twenty paces,” and later pops said gun into Adolph’s mouth, “I’m going to give you a taste of Momma’s home-cooking, Adolph,” and pulls the trigger. A standard love scene, scored with a trumpet solo, is guaranteed to have one rolling in the aisle. The film is also surprisingly well photographed.

Of the people involved, Peter George only directed one other film – a little-seen adaptation of Nathaniel Hawthorne’s Young Goodman Brown (1993) – and Jon Ayre has not written again. Producer Robert Tinnell later relocated to Canada where he has directed a number of worthwhile children’s films – including Kids of the Round Table (1995) and particularly Frankenstein and Me (1996) and Believe (2000).