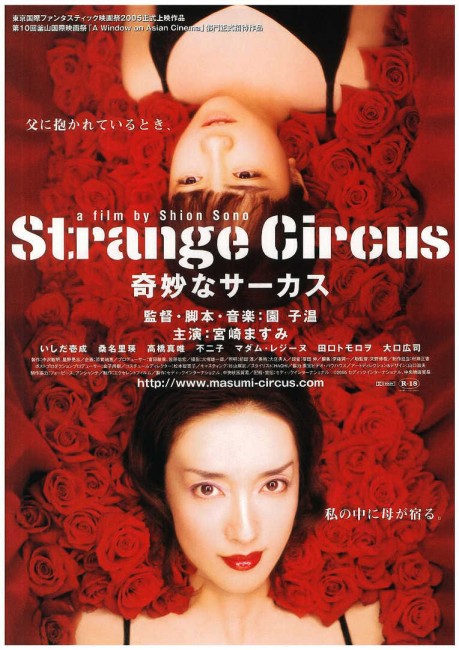 Twelve-year-old Mitsuko Ozawa is used for sex by her father, the school principal Gozo. Mitsuko’s mother Sayuri is upset after discovering them together. Gozo then uses both Mitsuko and her mother for sex, alternately locking one inside Mitsuko’s cello case and forcing them to watch him having sex with the other. Sayuri becomes abusive in her treatment of Mitsuko but then falls down the stairs and is killed. Mitsuko then ‘becomes’ her mother and her father’s favourite. However, Mitsuko, now confined to a wheelchair, finds herself ignored as her father moves whores into the house. All of this is a book being written by erotic novelist Taeko Mitsuzawa who is wheelchair-ridden herself. Taeko chooses publisher’s assistant Yuji Tamiya as her new aide and potential lover. She asks him to wheel her around but hides from everybody the fact that she really can walk. Yuji starts to investigate into Taeko’s past and discovers connections between her and the fictional character of Mitsuko.

Japanese director Shion Sono has become an increasingly interesting name dince the early 2000s. Sono first gained attention with his tenth film, the modest hit of Suicide Club (2002) and went onto its sequel Noriko’s Dinner Table (2005). Over the next few years, Sono has made a number of other genre films, including Exte: Hair Extensions (2007) about killer hair extensions; Cold Fish (2010) about serial killings, tropical fish salesman and the reclamation of male pride; Guilty of Romance (2011) about sexual fulfilment and murder; Himizu (2011) about murderous children; Tokyo Tribe (2014), a near-future film about gangland wars where much of the dialogue is delivered in rap; The Land of Hope (2012) set in an alternate world; Love and Peace (2015), a romance involving talking animals; Tag (2015), a reality blurring teen film set in a world without men; the comedy The Virgin Psychics (2015); The Whispering Star (2015) about an intergalactic delivery android; Tokyo Vampire Hotel (2017); and The Forest of Love (2019), as well as non-genre items such as the gangster film Hazard (2005), the sexual drama Love Exposure (2008) and the hilarious Why Don’t You Play in Hell? (2013).

Shion Sono’s films readily dive off into some fairly disturbed territories and Strange Circus is no different. Part of you starts doing a double-take within the opening moments as the narrator Mitsuko tells us how she became her father’s lover at the age of twelve. This promptly get even more twisted as the father alternates between having sex with Mitsuko and her mother (Masumi Miyazaki) while keeping the other locked in a cello case beside the bed. It becomes confusing following the mother’s death when the girl then talks about ‘becoming’ the mother and we are not sure whether this is meant allegorically or literally and there is some form of soul transference going on.

There are all manner of weirdly twisted scenes throughout – the wheelchair-ridden daughter finding the father (Hiroshi Ohguchi) has moved a bunch of hookers in after the death of the mother and protesting her lack of attention by stabbing herself in the legs with a kitchen fork or where she is tormented by a hooker and forced to drink milk off the kitchen floor. Even assistant Issie Ishida attends a support group for people who have undergone body modifications where he stands up to show off his own modifications (something we never get to see until the end).

For much of the film you wonder where all this casual perversity is going or what purpose the double structure serves. The direction of it all seems confusing. All of that said, Shion Sono pulls it all together in the last twenty minutes and conducts a conceptual reversal twist of considerable ingenuity on us that flips both the narratives and then brings them together in striking ways that pull the carpet completely out from under us. The results are admirably perverse.