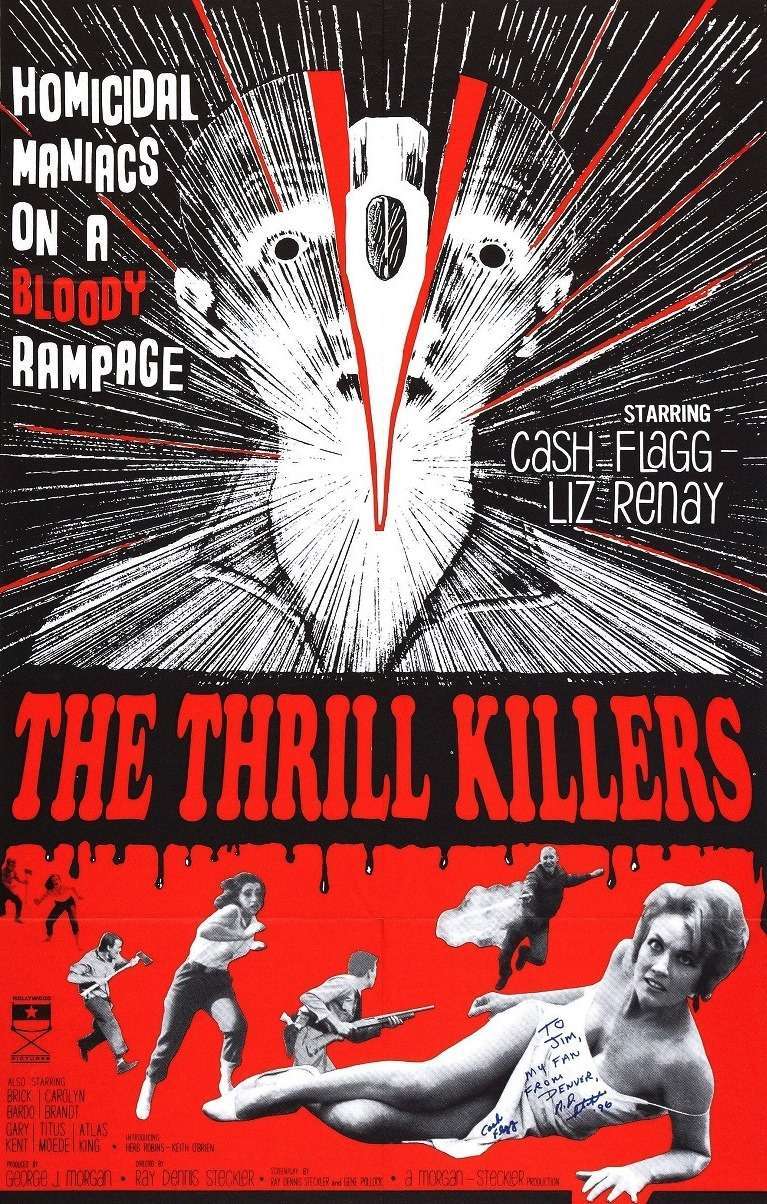 aka The Maniacs Are Loose

Joe Saxon is a Hollywood hanger-on, having been trying to find his big break as an actor for some time. Joe’s wife Liz is becoming increasingly unhappy at the mounting unpaid bills. At the same time, the killer Matt ‘Mad Dog’ Click is travelling through L.A., beating women and shooting people to take their vehicles. A couple investigating an empty house are tortured and killed by three dangerous maniacs escaped from an insane asylum. Liz makes the decision to leave Joe and heads up to visit her cousin in Topanga Canyon. As Joe comes after her, she falls into the clutches of Mad Dog and the three escaped killers.

Filmmaker Ray Dennis Steckler (1936-2009) has attained a cult reputation in Psychotronic cinema. Steckler can be compared to contemporaries of his such as Herschell Gordon Lewis or even more so Edward D. Wood Jr. Like Lewis and Wood, Steckler was someone who never made it as a mainstream director or had any success in his lifetime, but whose films have been rediscovered a couple of decades later and are now fascinating curio items of weird and terrible cinema. Almost all of Ray Dennis Steckler’s reputation centres around The Incredibly Strange Creatures Who Stopped Living and Became Mixed-Up Zombies (1964) and its unique title. In fact, the rest of Ray Dennis Steckler’s films, excepting perhaps his superhero spoof Rat Pfink a Boo Boo (1965), remain little seen and not readily available.

Ray Dennis Steckler’s films, like those of Edward D. Wood Jr, often give the appearance of being made on the fly with whatever resources were available or of having been stitched together out of various other uncompleted film projects. That said, The Thrill Killers is probably the best of Ray Dennis Steckler’s films (at least that I have been able to see). As a director, Steckler was never particularly good at drama. Case in point being the climactic scene here where his psycho flees from a motorcycle cop on a horse and the various runnings through the California hills, where Steckler simply aims his camera at people running about and it never enters his head to do something like increase drama by alternating long shots with closeups or cutting between elements within the scene.

The scenes with the three escaped maniacs harassing and torturing Ron Burr and Steckler’s real-life girlfriend Carolyn Brandt in an abandoned house at least have a reasonable degree of menace. Best of all is Steckler himself who plays the lead psycho Mad Dog Click. With his bony frame and shaven head focused into a menacing glare, Steckler gives the role his all.

A recurrent theme in Ray Dennis Steckler’s films is of maniacs on the loose. Although these are maniacs not so much in the sense of the cod-Freudian motivation that became all the thing after Psycho (1960), but more in the way that the 1950s liked to characterise juvenile delinquents – as sullen, moody, prone to violence and having no more motivation that just being bad seeds.

Underlying The Thrill Killers is the theme of the actor (played by Brick Bardo) who is a hanger-on around Hollywood, hoping for his big break while staving off pressure from his wife to settle down and accept a normal job. It is a theme that almost certainly had a personal resonance for Ray Dennis Steckler who himself hung around the edges of Hollywood for many years without ever finding any recognition, ironically until he quit making movies. Steckler even casts this film’s producer George J. Morgan as the producer who finally offers Brick Bardo his big break.

One of the most amusing things about The Thrill Killers was Ray Dennis Steckler’s promotional strategy. Prints of the film come with a gimmick that the great master of gimmicks William Castle must have felt jealous that he never thought up – an introduction from the stage hypnotist The Amazing Ormond who tells the audience to relax and look at a spinning wheel whereupon he proceeds to hypnotise them. At various intervals throughout the film, the spinning wheel (the only sections of the film in colour) reappears to supposedly put the audience back in a trance. This was given an even more amusing spin during the original theatrical release of the film where Steckler and a few friends used to go to sessions wearing masks and would get up and run around waving cardboard axes when the spinning wheel came on.