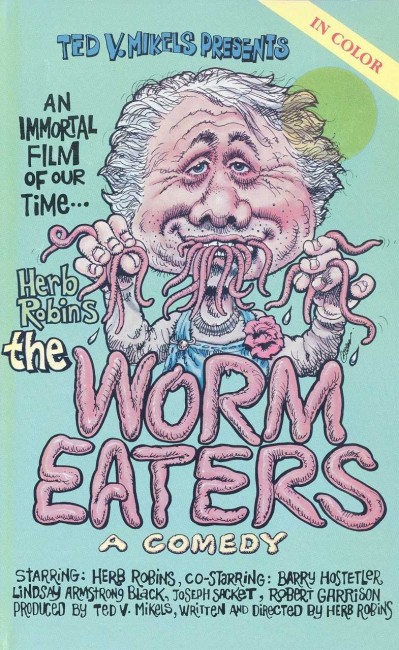 The mayor has plans to redevelop Lake Melnick and builds condos. The one thorn in his side is reclusive German immigrant Herman Umgar who they suspect may have the deed to the lake even though Herman denies having it. The mayor previously had Herman’s father killed and buried in the concrete of the dam. Herman is obsessed with his worms and regards them as his only friends. As various people come seeking the deed, others seeking camping ground on his property, Herman feeds them worms. This causes those eating the worms to mutate into human-worm hybrids. A trio of fishermen who drowned in the lake but survived by becoming worm creatures next come demanding some of Herman’s worm women for themselves.

Herb Robins (1930-2011) is a name that few are likely to recognise. (One suspects Robins is a Anglicised name – his brother was Mort Rabinowitz who worked as a production designer in 1970s/80s tv, including designing the house in Salem’s Lot (1979), among others shows). Robins only directed two films – the other being the obscure The Brainsucker (1998), and wrote one other film with Ray Dennis Steckler’s Sinthia the Devil Doll (1970). Robins did make a number of minor acting appearances in Ted V. Mikels’ The Doll Squad (1973), Invasion of the Bee Girls (1973) and even Tobe Hooper’s The Funhouse (1981). And then he left us behind The Worm Eaters, a film that is guaranteed to turn your brain inside out.

The Worm Eaters is produced by Ted V. Mikels, director of legendary Z-budget fare such as The Astro Zombies (1968) and The Corpse Grinders (1971), which gives us some clue what we are in for. Not unexpectedly, the film comes with a level of psychotronic dementia that may cause serious damage to one’s artistic sensibilities. One gets the impression that Herb Robins was attempting to make something in the vein of Willard (1971), one of the prime films in the 1970s Animals Amok genre, concerning the strange relationship between a man and a group of rats he tames. The Worm Eaters seems like a Willard copy made on a poverty row budget – we get another strange recluse who has an unnatural relationship with his animals but here it appears that the only animals the production could afford were lots of worms.

The Worm Eaters is full of bad filmmaking. The opening scene alone consists of two children yelling “I’m going to beat the crap out of you,” “She’s said “I’m going to beat the crap out of you”,” at one another with no conviction and where the adults around them seem unable to keep straight faces. There are some incredibly bad performances throughout – I am unable to find any credits that identify who play most of the roles but one of the worst offenders is Barry Hoestelier who plays the mayor’s assistant Max in a way that seems to require he adopt a fake regional accent and contort every muscle of his face each time he speaks.

By far the most bizarre performance in the film comes from Herb Robins himself who play the role of the reclusive Herman Umgar, Robins puts on a Germanic accent and goes nuts, talking to his worms, rubbing them in his face, keeping them in a cardboard house he has built in his living room, And then there are the whacked scenes where he starts feeding worms to people – like where Heidi, the fellow German in town, comes over to dinner and he feeds her spaghetti and we see closeup scenes of worms going into her mouth alongside the pasta. When Herman finally wreaks his vengeance against the town, we get a host of closeup scenes of his victims eating worms inside their burgers, milkshakes, hot dogs, birthday cake and the like.

And there are pieces of filmmaking that are just bizarre no matter what way one looks at them. In the scene where Herman goes to town, for some reason as he drives through the main street, every corner seems to have a group of people getting into a fight occurring on it. The most bizarre scenes come towards the end where the women that Herman feeds the worms to start turning into worm hybrid creatures that he keeps caged up. In a scene that seriously impacts one’s sanity, he is visited in the middle of the night by a group of three men who reveal they were fishermen who were murdered and dumped in the lake (a scene we see at the start of the film) but instead transformed into worm creatures and now want Herman to give them his worm women as companions for their lonely existence. The climactic scenes involve Herman himself transformed into a worm creature, which requires Robins to be outfitted with something that looks like a body sheath/sleeping bag on his lower half, trying to wriggle his way down to the lake.