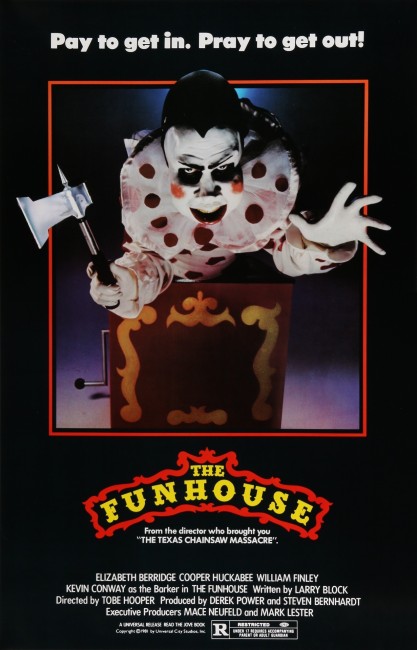 Teenager Amy Harper sneaks out from home to join her boyfriend and another couple who have decided to spend the night in a carnival horror ride as a lark. There they are witness as the carnival barker’s mindless, deformed son pays the fortune teller Madame Zena for sex and then kills her after she refuses to give back his money when he prematurely ejaculates. When the barker discovers they are witness to the killing, he lets the son loose in the funhouse to kill them.

Director Tobe Hooper had an enormous cult hit with the shock-and-brutality classic The Texas Chain Saw Massacre (1974). After a failed attempt to repeat that success with the dull Eaten Alive/Deathtrap (1977), Hooper began to move towards the mainstream with the fine tv adaptation of Stephen King’s Salem’s Lot (1979) and The Funhouse, before having his greatest success with the Steven Spielberg-produced Poltergeist (1982). (See below for Tobe Hooper’s subsequent films).

In some ways, The Funhouse is a relative disappointment from Tobe Hooper. It is a disappointment in that after such a groundbreaking work as Texas Chain Saw, here all that Hooper does is to make a slasher film, clearly modelled in the vein of the then recent successes of Halloween (1978) and Friday the 13th (1980). Much of The Funhouse falls within the formulaic guidelines of the slasher genre. The characters are familiar stock victims – the chaste heroine who eventually becomes the Final Girl, while the others are made to seem deservous of their fates because they do things like have sex and smoke dope.

On the other hand, The Funhouse does undeniably work. Certainly, when placed up against almost any other slasher sequel or copycat from the same period it is light years ahead of the competition. The scene where Wayne Doba, lit only by the flickering strobe lighting, rips off his Frankenstein monster mask to reveal an even more hideous face beneath is startling. So too is the vivid rape-killing of Lara Woodruff. The climax is intensively maintained, although does go over the top in places and does trade in slasher movie villain-returns-from-the-dead cliches.

There are some good performances from the carnival people. Kevin Conway has an especially good range of shaded nuances – one scene where he is begging the teenagers to come out and his expressions run all the way from honest imprecations to creepily veiled and then downright threats and back again is particularly memorable. Sylvia Miles is also fine in the scenes with Wayne Doba.

Tobe Hooper has a liking for bizarre families – both The Funhouse and his Texas Chainsaw films are filled with in-bred backwoods psychotics clinging to a bizarre notion of nuclear family. What Hooper also does particularly well with The Funhouse is tie into the sense of the dark underside of the carnival. He is constantly playing with horror effect and illusion and then pulling away to show something even nastier underneath – the deformed son who wears a Frankenstein monster mask that is revealed to be hiding something even more hideous beneath; the magician (a cameo appearance from The Phantom of the Paradise (1974) himself William Finley) who we think has accidentally killed a woman in his act before it is revealed to be part of the illusion; and, of course, the entire setting of the funhouse where beneath the theatricality of the horror ride people are being stalked and slaughtered. The opening is an elaborate but pointless joke on Halloween and the Psycho (1960) shower scene.