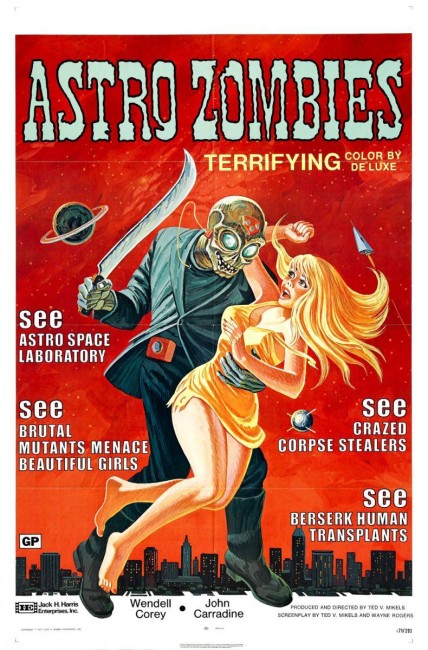 Dr DeMarco, along with his mute, deformed lab assistant Franchot, is attempting to build an Astro-Zombie – a human body that has been brought back to life with a solar-powered artificial heart, its memory extracted and radio-controlled implants placed in its brain. Agents of a foreign country, led by the deadly, seductive Satana, attempt to get their hands on a tape that contains details about the Astro-Zombies. In the fight between various rival groups, detectives and the CIA try to track down Satana, as well as stop an out-of-control Astro-Zombie that is killing people.

The Astro-Zombies has a genuine Grade Z reputation that sits it right up there alongside the works of Edward D. Wood Jr. It becomes hard to accept the film seriously from the point that the opening credits play where Mikels serves up a series of scenes with wind-up toy robots fighting one another. We have no idea whether these are meant as serious special effects scenes or some ironic counterpoint to the film’s theme of a mind-controlled zombie as the toy robots have nothing to do with anything that happens in the rest of the film.

There are many other bad movie elements to the film – one highly amusing piece is the ultra-cheap mad scientist’s laboratory set, which has been filmed in someone’s basement and where the memory extractor device is no more than a metal lampshade placed on the actor’s head. The actual research being conducted by John Carradine’s mad scientist is a nonsensical mishmash where he is said to variously be attempting mind control using radio-controlled implants placed into the subject’s head, experiments in blood coagulation, memory extraction and the installation of a solar-powered heart!

As a director, Ted V. Mikels has an ultra-slow pace. Scenes seem to take forever to happen – the operation that mad scientist John Carradine conducts to create his astro-zombie rarely involve anything other than endless scenes of the abovementioned nonsensical doubletalk. We get scenes that consist of no more than people driving in their cars for minutes at a time. Much of the film is taken up long drawn-out spy capers, which are so murkily plotted that one is never sure why things are happening or why various groups are running around.

Mikels throws in much in the way of typical 1960s exploitation. The sexual liberation and freeing up of censorship that came in the 1970s hadn’t quite arrived yet so the film consists only of a variety of scenes where the astro-zombie attacks women, never doing anything more than tearing off their shirts and stripping them down to their bras. Certainly, there is a topless dancer covered in bodypaint as the feature act at a nightclub and a woman bound up in John Carradine’s lab for the latter half of the film wearing only gold lamé bra and panties.

One thing you have to credit Ted V. Mikels for is managing to array an amazing cast. There is John Carradine who once claimed that he had appeared in the most films of any actor – the majority of these were of the no-budget variety made during the latter four decades of his life, of which The Astro-Zombies is a prime example.

There is Tura Satana, the Asian bombshell and cult figure that came to attention in Russ Meyer’s Faster Pussycat, Kill! Kill! (1965) and also played in Mikels’ The Doll Squad. She vamps it up to the maximum as the spy mistress of an unnamed foreign power, her sultry presence decked out in jaw-dropping ankle-length gowns with splits up the side that reveal the full length of her thigh. Possibly the most mind-boggling name though is that of scriptwriter Wayne Rogers who of course later became famous as an actor in the role of Trapper John on tv’s M.A.S.H. (1972-83).

In later years, after his rediscovery as a Psychotronic favourite, Ted V. Mikels revisited the film with three sequels – Mark of the Astro-Zombies (2010), Astro-Zombies M3: Cloned (2010) and Astro-Zombies M4: Invaders from Cyberspace (2012).