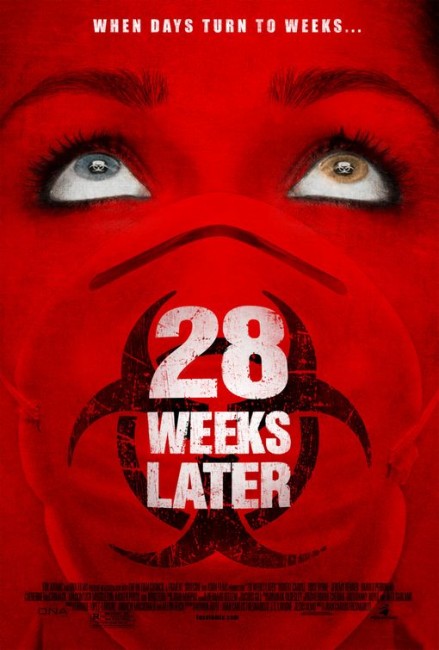 During the outbreak of Rage virus across England, Donald Harris and his wife Alice take refuge in a cottage with several others. Their safety is interrupted by a young boy fleeing from a horde of zombies. As the zombies break in, Donald flees, deliberately abandoning Alice. 28 weeks later, the Rage zombies have died out from starvation and a NATO force has reoccupied England and created a Green Zone around London where surviving civilians are being repatriated. Donald has been appointed in charge of power and electricity and is rejoined by his teenage daughter Tammy and young son Andy. He tells them how he saw their mother devoured and there was nothing he could do to save her. They break out of the Green Zone and return to the house seeking mementoes of her – only to find her still alive. Back in the Green Zone, the medical specialist Scarlet is fascinated to discover that Alice is infected but has a natural immunity to Rage. When a guilty Donald goes into confront her, Alice deliberately bites and infects him. The infected Donald rampages through the hospital, biting others. The military are forced to call an emergency quarantine and General Stone orders all infected and civilians in the medical centre to be shot alike. Amid this, Scarlet tries to escape with Tammy and Andy, seeing them as potentially carrying a natural antidote to Rage. Joined by a friendly solider Doyle, they try to escape to safety in between ravening hordes of zombies and the military who have ordered Central London to be firebombed to stop the outbreak.

28 Days Later (2002) was an end of the world/zombie film made as collaboration between director Danny Boyle and writer Alex Garland. Despite being made on a low budget ($8 million), 28 Days Later was a surprise hit in international release. Among other things, it brought about a sudden revival of interest in the films of George Romero and sparked off a massive spate of Romero-inspired zombie films throughout the latter half of the 00s.

I must admit being one of the voices that felt disappointed in 28 Days Later. Danny Boyle and Alex Garland had appropriated too many of their ideas from elsewhere – notably from Romero’s Day of the Dead (1985) – and 28 Days Later felt less like a reinvention of the zombie genre than a film that went supermarket shopping for its ideas among a body of other genre films. In particular, when it came to the depiction of the aftermath of the disaster, Boyle and Garland only skimmed over the scenario and failed to get inside it on a deeper level.

With the sequel, Danny Boyle and Alex Garland step back to executive producing roles, while handing over direction to the relatively unknown Spanish director/writer Juan Carlos Fresnadillo. Juan Carlos Fresnadillo is an interesting name who had previously made the fascinating Intacto (2001), a film set around the intriguing premise of a secret underground where people gamble on each other’s luck quotient. 28 Weeks Later certainly announced Fresnadillo as a director with a future ahead of him.

28 Weeks Later emerges as a much bigger and better film than the original. Juan Carlos Fresnadillo retains some of the raw shot-on-digital look of 28 Days Later but opens the film up into big screen format. Whereas the original was able to depict the devastation merely by shooting parts of London early in the morning or by holding up traffic for minutes at a time, the sequel covers vast sweeps of the city and we see a number of well-known landmarks lying in devastated ruin (with Imogen Poots and Mackintosh Muggleton crossing a deserted London Bridge on a scooter at one point). When Fresnadillo’s camera gets out beyond the Green Zone, the devastation of the streets is strikingly well conveyed. This has been achieved by a combination of location shooting and careful work by several digital effects houses, who later do a highly impressive job of depicting the firebombing of Central London.

I was greatly surprised by 28 Weeks Later. Going in to see a sequel to an original that I had not like a huge amount, I didn’t expect much. Instead, 28 Weeks Later emerges as is a sequel that improves over the original in all areas. The overly familiar genre ideas of 28 Days Later have been extrapolated into a new scenario that has been logically and sociologically extended from the end of the original. Juan Carlos Fresnadillo and his co-writers demonstrate an immensely assured narrative drive and sense of pace – one would have to say they do everything much better than the more directorially seasoned Danny Boyle did in the original. 28 Days Later had the feel of a competent shot-on-digital semi-professional film, whereas 28 Weeks Later has the full narrative stretch and dramatic punch of such a film being conducted with far better resources and a much better script and director on hand.

28 Weeks Later kicks in with one of the most captivating openings that one has seen in a film in some time. We start with a quiet intimacy on the scenes of Robert Carlyle and wife Catherine McCormack conversing by candlelight in the survival shelter, which is interrupted by the arrival of the kid banging at the door and the group’s moral wavering over whether to let him in. They do, whereupon there comes a sudden horde of zombies rushing up and battering their way into the house. Of course, the cruncher comes when Robert Carlyle makes an escape from an upstairs window, knowingly abandoning his wife to be devoured by the zombies. Juan Carlos Fresnadillo sets up a hair-raising scene with Robert Carlyle fleeing across a field trying to escape a horde of zombies to get to a boat, not before kicking the other survivor out to make his escape to freedom. It is a real kickass opening in its abrupt escalation that takes us all the way from quiet intimacy to ferocious survivalism within the space of a couple of minutes. Far more than that, it is an opening that throws us into a morally ambiguous arena by giving us the star name of Robert Carlyle yet seeing him engaging in highly morally dubious actions, which is disconcerting in that we have the feeling that we are also meant to regard Carlyle as the hero of the show for the simple fact that he is the biggest star name in the cast list.

In 28 Days Later, Danny Boyle had the feeling of a non-genre director who was merely visiting the horror genre. The zombie attacks were cut in the fast, blurred way that Boyle seems to prefer but had a tepidness to them that lacked any of the gore-drenched extremes that the film’s model, the George Romero zombie films, went for. Nor did Boyle do a particularly good job in driving suspense in a number of scenes where he could have. Contrarily, Juan Carlos Fresnadillo does all of the things that Danny Boyle should have. There are some nasty gore-drenched scenes, particularly during the scene where Robert Carlyle goes to meet his inflected wife in the hospital. (At one point, Juan Carlos Fresnadillo even determines to outdo the classic scene with the zombie getting his head lopped off by a helicopter blade from George Romero’s Dawn of the Dead (1978), having an entire field of zombies being massacred en masse by a helicopter blade, although this is not as cute a recreation of the scene as the one in Planet Terror (2007), which came out the same year).

In other parts of the film, Juan Carlos Fresnadillo creates a genuine seat-edge tension – like the scenes in the underground carpark, all shot in flickering emergency lighting, where those trapped inside struggle to get free as the infected start ravaging through their numbers, and the shock jolt that comes as the soldiers open fire and start massacring both survivors and zombies as they emerge into the street. Fresnadillo creates a number of superb seat-edge moments during the party’s journey through the streets – the scene where they must venture down a street past a sniper hiding in the rooftops; the car racing through the streets while being shot at by a helicopter; the venture into Wembley Stadium in total dark where one of the party has to navigate and direct the others with the use of a rifle nightscope, as all the while a zombie lurks in the dark.

What one also liked about the film is that Juan Carlos Fresnadillo and scriptwriters are perfectly prepared to kill off or infect people that in any other film might simply be designated the survivors because they are heroic, handsome or played by recognizable star names. What we have is a film that stands out with considerable superiority and directorial assurance in its blend of intense suspense, go-for-the-throat gore and large scale dramatic action. It is superior to 28 Days Later in all regards.

Of course, in appropriating names like ‘The Green Zone’ where parts of English society (notably in collaboration with occupying ostensibly-friendly American military forces) live in a protected centre of the city, outside of which chaos and lawless ruin lies, 28 Weeks Later cannot help but take on contemporary political overtones. The film seems to be making an analogy/critique of the Iraq War, of which Britain was notably a political partner along with the US. In particular, during the scenes where Idris Elba’s general orders a group of civilians and infected to be massacred alike, the film takes on overtones of the numerous accusations of military overkill by allied troops that have were emerging in Middle-Eastern war zones at the time. The film never pushes the social critique any further than this, as George Romero might have done – you could make comparisons to the savage satire with which Romero portrayed his civilians living inside a protected zone from the zombies outside in Land of the Dead (2005). However, this does serve to make 28 Weeks Later fall into a peculiar fad for Dystopian films set in England that came out in the last couple of years, which have also included the likes of Children of Men (2006) and V for Vendetta (2006), all of which use England (standing in for the USA) to make a statement about suspension of civil liberties and totalitarian authoritarianism.

(Nominee for Best Director (Juan Carlos Fresnadillo) at this site’s Best of 2007 Awards).