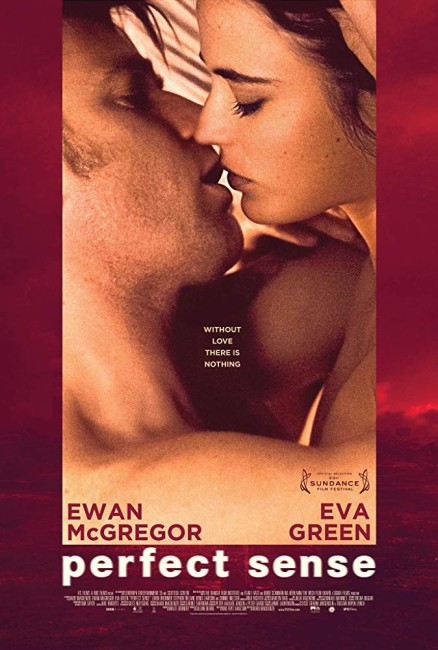 In Glasgow, the epidemiologist Susan tries to deal with an outbreak of inexplicable origin in which patients are overcome with strong feelings of sadness and afterwards find that they have lost their sense of smell. Susan is then affected, as is Michael, a chef who works in a restaurant that backs onto the alley across from her apartment. Michael treats her to food and the two become lovers. Not long after, people are affected by an intense feeling of fear and then an uncontrollable urge to eat everything they can. When this ends, they have lost their sense of taste. Michael’s restaurant struggles to cope in the aftermath where people at least discover that they can take pleasure in enjoying the temperature and texture of foods. Susan and Michael try to engage in a relationship. Next comes an uncontrollable sense of anger. Susan walks out on Michael in the midst of his outburst. Afterwards, people discover that they have lost their sense of hearing.

David Mackenzie is a British director whose name has been rising in recent years, especially after his third film Young Adam (2003), also featuring Ewan McGregor. He has made other works such as Asylum (2005), Hallam Foe (2005), Spread (2009) and You Instead (2011), and subsequent to this went onto the highy-acclaimed Hell or High Water (2016), which was nominated for a Best Picture Academy Award. All of these can be categorised as drama as opposed to genre material.

Perfect Sense reminds a good deal of the earlier Blindness (2008), which concerned a worldwide outbreak of a plague of blindness. Both films feature the common theme of a socially apocalyptic malady whereby the populace start to lose their senses – in both films, we are never given any explanation as to its source. Similarities continue elsewhere. Both films are works made not as works of genre science-fiction but come from international directors in the arts field and were sold first and foremost to festival audiences. Moreover, both films are funded from a multitude of international production companies – Perfect Sense comes from ten different companies, including BBC Films and Lars von Trier’s Zentropa Entertainments, from four different countries – and feature international casts.

Not long after, there came several similar films that operate on the idea of severely impairing the senses or faculties of the populace as in the Spanish-made The Last Days (2013) about people dealing with a socially apocalyptic malady of agoraphobia; Embers (2015) and Little Fish (2020) where the entire population suffers from loss of their memories; A Quiet Place (2018) and The Silence (2019) where the world is forced to become silent after an invasion by creatures that kill anybody who makes a sound; Bird Box (2018) where people are killed if they look outdoors or remove their blindfolds; and Awake (2021) where the whole world can no longer sleep. (See also Catastrophe Films).

At the outset, Perfect Sense is not what we expect when it comes to a social apocalypse film. It avoids the widespread sense of collapse and pieces of individual drama that you get in most of these films – at first, only a potted vignette shown in a montage of still photos and brief infodumps from the tv screen – and focuses on the connection between Eva Green and Ewan McGregor’s characters. Nevertheless, Perfect Sense soon starts to become quite a remarkable film as it progresses through the disappearance of the other senses. There is the extraordinary scene where the characters are overcome by a ravenous frenzy and we see them trying to consume everything in the near vicinity from lipstick, a raw fish in a market, food products in the restaurant to even one lab assistant devouring it is implied a live lab rabbit.

The overriding theme of the film is ‘life goes on’, of how after each catastrophic change occurs, we then see people trying to pick up and continue on with normal life in some way. We see small incidental touches that are perfectly science-fictional – how after the loss of taste, restaurants continue on offering up variations based on temperature and texture; of Eva Green and Ewan McGregor together in the bath playfully eating shaving cream and soap. In the world after the loss of hearing (where notedly even the soundtrack mutes as well), we have a remarkable scene where Ewan McGregor goes to a concert where people are playing musical instruments and the attendees place their heads up against vast speakers near the front where the dull, distant vibration proves the nearest they can get to hearing something; or casual throwaway images of people in the restaurant using sign language to communicate.

This leads to the film’s final shattering scene [PLOT SPOILERS] where the whole world loses its sense of sight. This is remarkable for the way it winds in the reconciliation of the two characters who start to lose their sight just as they run back into one another’s arms. It is implied after the outburst of love that strangers will be left with just the ability to feel one another. The logician in one did tend to wonder what the social ramifications of this would be. When people only have the sense of feel left, how does society not completely collapse overnight? How could a society possibly organise, let alone people communicate with one another? With no sense of smell or taste, how do people go about finding food anymore? If the two lovers are together, there must be some point they would break contact – to go find food, go to the bathroom or some such – how would they find one another again? It would surely be an ending, the powerful upbeat note the film ends on aside, that would doom humanity to mass starvation within a matter of days.