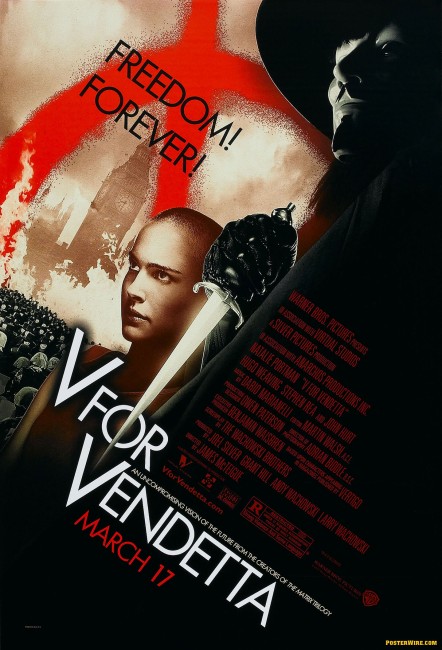 Britain in the future where the country has come under a dictatorship led by High Chancellor Adam Sutler. Evey Hamilton, a production assistant at the British Television Network, ventures out after curfew only to be attacked by two Fingermen guards. She is saved by a mysterious figure in a mask who calls himself V. V takes Evey with him as witness as he blows up The Old Bailey courthouse as celebration of Guy Fawkes Day and as a statement against Sutler. This draws the attention of the security forces towards Evey. Next, V breaks into the tv network and hijacks a broadcast to announce that he is going to blow up the Houses of Parliament on November 5th. V takes Evey with him to his lair. There Evey comes to a gradual understanding of V’s motives, which are to bring down the corrupt government that used him as an experimental subject in chemical experiments. As she becomes a target of the security forces, Evey comes to join V’s fight against the government.

V for Vendetta is based on the graphic novel created by artist David Lloyd and the celebrated comics writer Alan Moore. Alan Moore is best known for renowned works like Miraclemen (1982-5), the Batman classic The Killing Joke (1986) and Watchmen (1986-7). Alan Moore’s works have been adapted into films like From Hell (2001), The League of Extraordinary Gentlemen (2003), Watchmen (2009), the Mogo Doesn’t Socialize and Tygers episodes of Green Lantern: Emerald Knights (2011, Batman: The Killing Joke (2016) and the tv series Watchmen (2019), while the title character in Constantine (2005) was also originally a Moore creation. V for Vendetta first appeared in the British comic-book Warrior between 1982 and 1985 and then after Warrior‘s collapse was brought up by DC Comics and reprinted under its own title beginning in 1988 where Alan Moore extended the story out to a ten-issue saga.

V for Vendetta has long been planned as a film. Producer Joel Silver first obtained the rights in the late 1980s. It was announced around 1995 under Brett Leonard, the director of films like The Lawnmower Man (1992), Hideaway (1995), Virtuosity (1995) and Man-Thing (2005). The Wachowski Brothers, then only known for the screenplay for Assassins (1995), were attached as scriptwriters. Thankfully that version of the film never went ahead – one shudders to think what V for Vendetta would have emerged like under Brett Leonard’s hamfists. Of course, The Wachowski Brothers (later The Wachowskis following their transition) then went onto the cult success of The Matrix (1999) and its two sequels The Matrix Reloaded (2003) and The Matrix Revolutions (2003), and subsequent to this Speed Racer (2008), Cloud Atlas (2012), Jupiter Ascending (2015) and the tv series Sense8 (2015-8).

In the aftermath of Matrix fame, The Wachowskis were able to then mount this adaptation of V for Vendetta, they writing the script and co-producing along with Joel Silver. The director’s chair was given over to James McTeigue, who worked as assistant director to The Wachowski Brothers on all Matrix films and other works such as No Escape (1994), Street Fighter (1994), Dark City (1998) and Star Wars Episode II: Attack of the Clones (2002). V for Vendetta was James McTeigue’s directorial debut.

For the most part, V for Vendetta is surprisingly faithful to the story that Alan Moore told in the comic-book. The Wachowski Brothers change the background that led up to the totalitarian future somewhat – in Alan Moore’s version, the future state came about after a nuclear war; while the leader’s name is changed from Adam Susan to Adam Sutler. Evey was slightly younger – sixteen years old – and was forced to work as a prostitute; while Steven Fry’s Gordon was a petty criminal, not a talkshow host. The ending also changes things slightly with V planning to use his secret train to blow up 10 Downing Street rather than the Houses of Parliament. However, the plot – from Evey’s salvation by V as she is attacked by Fingermen, the blowing up of The Old Bailey, the Larkhill concentration camp background, to the scenes of Evey’s false imprisonment and the letter from Valerie – is amazingly faithful.

That said, Alan Moore was critical of the film. His most notable criticism was in how The Wachowskis had altered the ideological nature of V’s fight – in the comic-book, V was attempting to promote outright anarchy rather than overthrow a dictatorship. Alan Moore’s big point was that he left readers up to themselves to decide whether fascism or anarchy were more preferable than the other or whether V was a hero or a madman. On the other hand, Moore’s co-creator David Lloyd heaped praise upon the film, notably James McTeigue’s faithful capturing of his drawn visuals.

Alan Moore’s complaints notwithstanding, one ended up being extremely impressed by V for Vendetta. After the relative dips of The Matrix Reloaded and The Matrix Revolutions in terms of coherence and ideas, V for Vendetta is a literate and confidant return to strength for The Wachowskis. What amazes one is how political a film V for Vendetta is. The Wachowskis have clearly changed the background from the comic-book so that they can use V’s rebellion against the Sutler state to make a little-disguised protest against the suspension of civil liberties that both George W. Bush and Tony Blair have been responsible for instituting in the name of security. The Wachowskis offer a number of potent speeches from V where they attack the populace’s willing surrender of civil liberties out of a fear of terrorism as the beginning of the fascist state that we end up with in the film. (To back the point up, The Wachowskis potently use imagery taken direct from the Iraq War and London Tube Bombing).

Indeed, V for Vendetta is one of the most daring and ideologically out-there A-budget films put out by a major studio since 20th Century Fox funded Fight Club (1999), which also had an openly anarchist manifesto. Not to mention The Wachowski Brothers having the boldness in an era where most of the major US newspapers and tv networks are afraid to come out and say anything that openly criticizes the Bush White House and Iraq War to create a film that features a bomb-throwing terrorist as hero.

As with much of The Wachowski Brothers’ work, V for Vendetta is rich in ideas and metaphors – the film makes much play on the multiple imagery associated with the letter V. Certainly, compared to The Matrix films, V for Vendetta, though ostensibly an action film, is much more talky. There is not much in the way of action sequences, although James McTeigue does throw in an impressive equivalent of the Wachowskis’ Bullet Time shootouts during a knife-fight at the climax. Mostly, V for Vendetta works on the level of its script. The most beautiful parts of the film are the reading of the letter from Valerie and the subsequent scenes where Evey finds out the true nature of her imprisonment and torture. These are spellbinding and beautifully written and hold the audience enrapt.

The one weak point about the film is star Natalie Portman who seems bland as Evey. One wonders why they could not have hired a genuine British actress as the rest of the cast – excepting Aussie Hugo Weaving – and background has been scrupulously played as British. Why the part could not have been cast a real British actress like Kate Beckinsale, Keira Knightley or Sophia Myles is a mystery as Natalie Portman’s accent does not convince and is the one part where the film falls down. However, Portman ends up being entirely upstaged by Hugo Weaving as the tricksterish V. Besides getting all the best lines, Hugo Weaving gives a magnificent performance that lights the entire film up, a performance he gives by the power of his voice alone.

James McTeigue subsequently went onto uncreditedly direct the reshoots of The Invasion (2007) and then onto the directorially exhilirating Ninja Assassin (2009), also produced by the Wachowski Brothers, followed by the horror film The Raven (2012), featuring Edgar Allan Poe up against a serial killer, and the non-genre action film Survivor (2015) and the home invasion film Breaking In (2018).