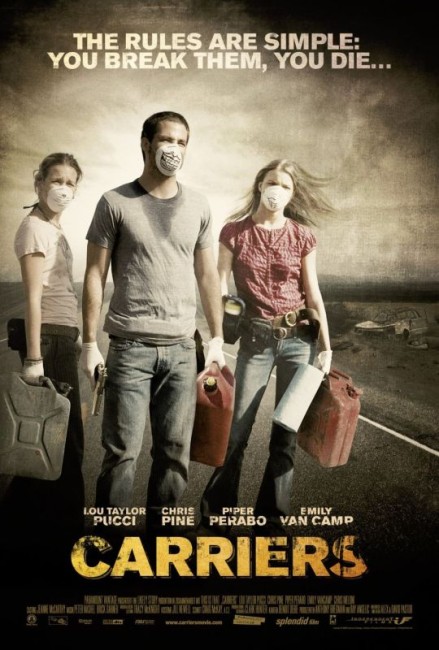 Brothers Brian and Danny Green and their respective girlfriends Bobby and Kate are driving from Colorado heading to Turtle Beach. All around them, the country has succumbed to a deadly epidemic that kills everybody it infects. They come across a man blocking the road ahead who run has out of gas. The pragmatically hard-headed Brian refuses to give aid when they see that the man’s daughter is infected. However, their car breaks down further up the road and they are forced to hike back and strike a deal with the man Frank. They continue on with Frank and his daughter Jodie quarantined in the rear of the vehicle separated from them by a saran wrap seal. They head to a town where Frank has heard they have derived a serum. All along the way, the group is rent by the conflict between Brian’s survival-oriented pragmatism and the others’ humane concerns for people, as well as marauders on the roads. Meanwhile, members of the group are also hiding the fact they have become infected.

Carriers was a directorial debut for Spanish-born brothers Alex and David Pastor. The Pastor Brothers subsequently went on to make the fine The Last Days (2013) about a worldwide plague of agoraphobia and The Occupant (2020) about a former tenant who takes revenge against the people who moved into his apartment. They have also worked as screenwriters for the ghost story Out of the Dark (2014) and Tarsem Singh’s bodyswap thriller Self/less (2015) and created the tv series Incorporated (2016-7) about a future dominated by monolithic all-powerful corporations.

Carriers starts innocuously. The four principal characters could easily be the usual group of teens/twentysomethings on a road trip through the backroads. The carpet starts to be pulled out from under this assumption as they come across the vehicle with Chris Meloni and his daughter Kiernan Shipka and argument ensues about whether to stop and offer gas or, as Chris Pine urges, to keep on going, before they see the daughter (Kiernan Shipka) hiding in the back with a bloodstained facemask and he accelerates away. The kicker comes when their car breaks down not far down the road and the only course of continuing on is having to go back to conduct a deal with Chris Meloni. They then drive off with Meloni and daughter quarantined with saran wrap covering the area between the backseat and the trunk space of the SUV and the others in the front.

From this point, Carriers becomes decidedly watchable. It is never more so than the scenes where they arrive at the school where Chris Meloni has been holding out hope for finding a cure, only to discover a tented area inside where doctor Mark Moses is tending a bunch of children before revealing he is infected too, there is no antidote and he is preparing to feed the kids poisoned Kool Aid to put them out of their misery. Meanwhile, back in the car, Piper Perabo is left tending young Kiernan Shipka when Kiernan to start choking and Piper has to make the decision to break the seal and go to her aid – only for Kiernan to then cough blood all over her and Piper having to hide the bloodstained shirt and hurriedly replace the seal as the others return. The dramatic intensity of the situation doesn’t end there with this being followed by the scene where Kiernan Shipka wants to go to the toilet and Chris Meloni cautiously decides to accompany her to the Port-a-Potties across the other side of the carpark in the full knowledge that Chris Pine is urging the others to drive off and leave them there.

This tension continues through the rest of the film – the seat edge scene where they arrive at a golf club and Chris Pine is fooling around on the diving board of the pool, cleaning the leaves out just as a dead body surfaces from under the water and he loses his balance and is left clinging to the underside of the board, desperately trying not to touch the infected water inches below him. The scene where they eventually discover that Piper Perabo is infected and the drama that ensues as they decide what to do is emotionally gruelling.

This is an incredibly good and well written film. Of particular strength, as much as the dramatic twists and turns that the story takes, are the characters. The film is essentially construed as dramatic conflict between the two brothers as they are forced to cooperate. Leading the party is Chris Pine. You have become used to Pine in roles in Star Trek (2009) and sequels and Wonder Woman (2017) where he has ployed his handsome good looks to romantic and leading man parts so it is unexpected to see him in a part where he is not an heroic type and is urging ruthlessly pragmatic decisions for the sake of their survival.

Opposite Pine is Lou Taylor Pucci who holds liberal instincts and is constantly arguing against Pine in favour treating people humanely. Many of the later sections of the film are about conflicting Chris Pine’s hard-headed ruthlessness against Lou Taylor’s liberal instincts and Lou having to face the consequences of his choices. The fact that a film about the conflict between two brothers is itself written by two brothers leaves you with some interesting speculation about how much of this is personal.