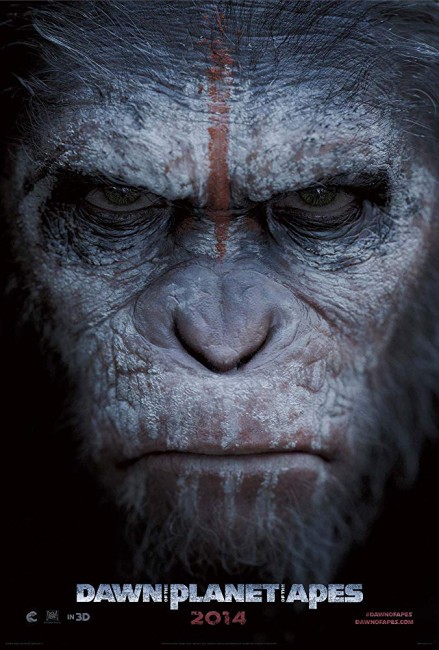 It is ten years after the release of the virus that raised ape intelligence and sparked their revolt against human society. Caesar now commands a group of apes that have built a village in the woods of Northern California. One day, their idyll is interrupted by the arrival of a group of humans but Caesar drives them away. In response, Caesar leads an expedition to the gates of the human encampment in the ruins of San Francisco, telling them that they do not want war and to stay away. However, the city’s resources are strained to the point of being mere days away from collapse and the only hope is to reactivate the hydroelectric dam that sits right above the ape encampment. Malcolm, the leader of the initial sortie, leads a group back to plead with the apes. He is able to make a tenuous agreement with Caesar to allow the humans access to restart the dam. This is deeply resented by Koba who only feels anger towards humanity. Koba sneaks into the human city and is able to steal a cache of guns. He returns to shoot Caesar and set the encampment on fire, blaming it on the humans. With the peace between species collapsing, Koba takes command of the apes, then raids the San Francisco armoury and declares war on the humans.

Amid the explosion of science-fiction on cinema and tv screens in the 1980s and 90s following Star Wars, the Planet of the Apes saga ended up being forgotten. The series fell silent during this era until Tim Burton took on the challenge of conducting a remake of the original with Planet of the Apes (2001). Although not a box-office failure by any means, this has a bad rap as a film and was widely disliked.

After this, the Planet of the Apes saga lapsed again until we had the sudden, almost out of nowhere appearance of Rise of the Planet of the Apes (2011), which proved to be a surprise box-office success. While not labelling itself as such, this could have been a prequel to the Tim Burton film or just as equally a fresh reboot of the franchise. This took the step of following the internal chronology of the series and loosely retelling the major events of Conquest of the Planet of the Apes and showing how the apes gained intelligence and began the overthrow of human society.

Dawn of the Planet of the Apes is a sequel to Rise of the Planet of the Apes. In much the same ways as Rise was a reworking of Conquest of the Planet of the Apes, it is a loose adaptation of Battle for the Planet of the Apes. Like Battle, it is set a few years after the ape revolution that featured in either preceding film where society has collapsed and apes and humans straddle a fragile line between hostility and peace. There are rough equivalents of the same characters playing the ape roles – Caesar as the wisely leader who promotes the path of inter-species peace; the angry militant gorilla Koba/Aldo who urges war and takes the step of killing other apes to further his cause; Caesar’s wisely orangutang companion Maurice/Virgil (who here also comes with a few suggestions of John Huston’s Lawgiver).

The one thing Dawn does not have is the mutants, which were reintroduced in Battle after their memorable appearance in Beneath. The mutants served the function of uniting the apes and humans against a common enemy in the titular battle, whereas Dawn makes it less complicated and concerns the war between humans and apes. (Part of me was hanging in there wanting to see what the reboot series might do with the mutants but alas).

We also get the introduction of the maxim “ape shall not kill ape” that was first introduced in Beneath and becomes a large part of the plot of Battle. Some of the supporting characters seem named to make reference to other aspects of the Apes series – Maurice could well be a nod to Maurice Evans, the actor who played Dr Zaius; while Caesar’s wife is named Cornelia, perhaps a reference to Roddy McDowall’s original chimpanzee character Cornelius; and they have a son named Blue Eyes, a sobriquet that Zira was fond of using to refer to Charlton Heston’s Taylor.

Rise of the Planet of the Apes did an amazing job of replacing the ape makeups that had been used in all the previous films with CGI and motion capture suits, thus allowing much more physically realistic apes and movements. What was amazing there could be multiplied by a factor of ten when it comes to Dawn of the Planet of the Apes. The first few minutes of the film throw us into a very different world – while we are captivated by the spectacular images of dozens of apes swinging through trees, riding on horseback, hunting, even of apes trying to conduct a dominance display against a bear, we are also being introduced to a world of fascinating depth and complexity. (It may escape most people who have an aversion to watching films in foreign languages that this is probably the only box-office blockbuster of the year where quite a reasonable portion of the film takes place through an invented ape sign language that comes interpreted for us via subtitles).

In terms of the creation of the apes, Weta Digital – who led the revolution in mocap with works like The Lord of the Rings: The Two Towers (2002) and King Kong (2005), both incidentally also featuring Andy Serkis – excel themselves here. The apes are created in photorealistic detail and given distinctive individual characters that interact in very different ways. The army of CGI artists (accompanied by Andy Serkis) do astonishing things with Caesar – some of the expressions, like the range of emotions that play out across his face as he watches the video of mentor James Franco, are amazing. Quite whether you can call it an actor’s performance or animation is a matter for debate but whatever it is is something that goes beyond either to combine as a single astonishing whole.

Indeed, the film’s successes lie less in the big action scenes than in the subtleties and soft nuance of its ape performances – the wisely conversations between Caesar and Maurice; the tenderness of the images of Kodi Smit-McPhee trying to teach Maurice to read; of watching the humans play with the baby chimp; the innocence and hurt that plays out across Blue Eyes’s face at learning of Koba’s true nature; or the way in which Koba is able to fool two human soldiers by playing dumb monkey and then abruptly turning the tables to snatch their guns. This is the art of CGI and motion capture at the peak of its game.

The directorial chair has been inherited by Matt Reeves, previously the director of the J.J. Abrams Found Footage monster movie Cloverfield (2008) and the English-language version of Let Me In (2010). Reeves excels himself here and makes his best film to date. The ape-human confrontations – from Caesar’s arrival outside the ruins of San Francisco to proclaim he doesn’t want war to the gradual thawing/escalation of tensions between the visiting party – are dramatically charged. The war scenes when they break out are massively exciting. (Perhaps the only point that you feel the film is going for deliberate eye candy spectacular is the tower collapse climax).

The script is excellent – all of the characters come with shaded nuances that leave no side of the conflict as being either black or white. The script articulates the strong position that war is something that benefits no party and in which any person operating from a fixed ideology that regards the other side as The Enemy benefits nobody. In all, we have a film that fails to put a foot wrong in any way.

Matt Reeves and Andy Serkis next returned with War of the Planet of the Apes (2017).

Director Matt Reeves is a former J.J. Abrams associate, who co-created the early Abrams tv series Felicity (1998-2002) before directing the Abrams-produced Found Footage monster movie Cloverfield (2008) and then going on to Let Me In (2010), the remake of a Swedish vampire film, and subsequent to this The Batman (2022). Reeves had made his directorial debut with one of the segments of the sf anthology Future Shock (1994). He also wrote the script for Under Siege 2: Dark Territory (1995) and produced 10 Cloverfield Lane (2016), The Cloverfield Paradox (2018), Mother/Android (2021) and the SF tv series Away (2020) and Tales from the Loop (2020- ).