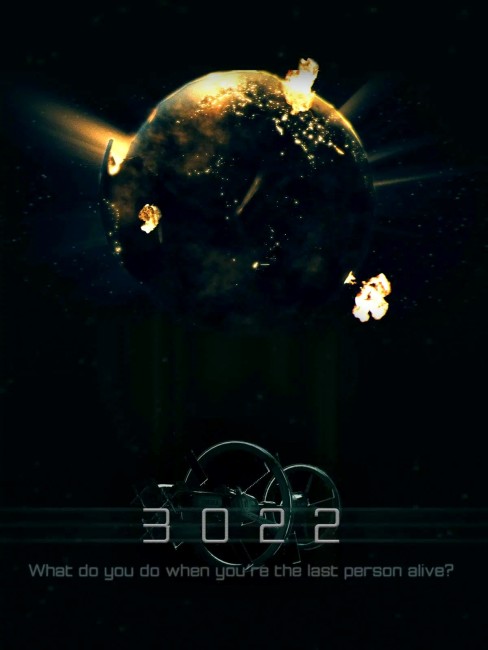 The year 2190. Pangea space station has been constructed as a refuelling station between Earth and a base established on Jupiter’s moon Europa. John Laine captains the four-person American crew that has been sent to man the station for a ten-year mission. Five years in and all of them are starting to go stir crazy. Communications with Earth is abruptly lost and all efforts to re-establish contact only results in silence. They realise that something must have happened to the Earth and that they could be the only people left alive. As this sinks in, their mental state deteriorates even further.

3022 comes with a solid and interesting premise – what if a group of people on a space station were the only ones to survive the destruction of the Earth? We’ve had various films about the last survivors on a space expedition before. The really cheap Doomsday Machine (1972) featured a plot where a crew of three men and three women were sent out to survive the destruction of the Earth before falling to in-fighting. There was also Defcon 4 (1985), which had a group of people in a space station orbiting Earth surviving a nuclear holocaust below.

It took me a long time to get into 3022. The characters are unlikeable and unengaging. We see them at the end of their mental tether slowly falling to pieces even before the disaster has begun. There have been good films made about this before – see Solaris (1972) and Dark Star (1974). On the other hand, all that John Suits seems to do is observe how dull and tedious life is aboard the space station. The main problem is that films that try to portray the dullness of a space mission end up being well dull. The prime example of this is Voyage to the End of the Universe (1963), while the thing that people always criticise about 2001: A Space Odyssey (1968) is that the space scenes are dull. The only film that made the monotony of the space mission work for it was Dark Star where everything was played as a comedy.

The film does perk up in around the last 30 minutes when a group of other survivors are introduced. This does give the film some much needed drama, even if after that point the only direction the film takes is the familiar plot of the crazed crewmember who is endangering the entire mission – an idea familiar from films like Supernova (2000), Sunshine (2007) and The Last Scout (2017).

I held hope for 3022 – I did enjoy Suits’s Pandemic. But 3022 is a dour and uninteresting film. It is not even a film that falls into the new genre for scientifically realistic space movies following hits like Gravity (2013) and The Martian (2015). Suits does nothing to make the station seem scientifically credible – the wheels of the station rotate but everyone seems to walk normally and the corridors of the station don’t curve. Nor for that matter is there any discussion about how the crew are able to sustain food, air and other supplies for three years after the Earth is gone.

The title has also caused some confusion where most people, including myself, assumed that it is the date when the film is set. You end up puzzled when the opening scenes tell us that the setting is in the year 2190 while the story covers through to the year 2198 – a disparity of 824 years. However, if one looks closely in the concluding scenes, you find that 3022 actually refers to the number of days that the crew end up being aboard the space station. You cannot help but feel that this confusion could have been more judiciously cleared up when it came to titling the film.