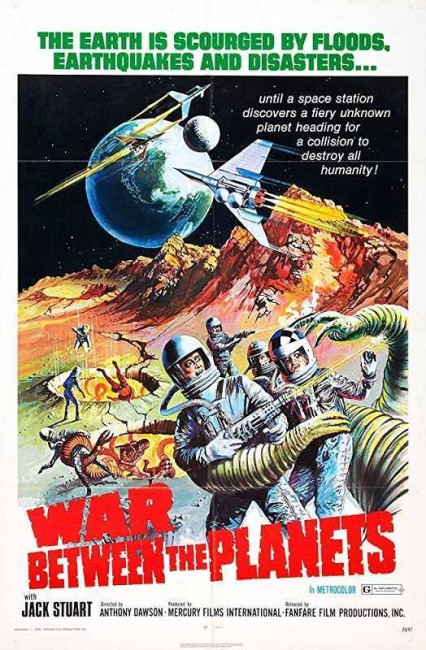 Mysterious gravitational forces are causing chaos in the Earth’s weather. Commander Rod Jackson of the United Democracies Space Command is sent to space station Gamma 1 to investigate the source of the disturbances. They detect a rogue asteroid moving through the Solar System. Rod makes the decision to land an expedition on the asteroid’s surface. There the astronauts must venture into the asteroid’s living core to plant an anti-matter bomb and divert its path.

War Between the Planets was the third in a tetraology of Italian-made space operas made by hack director Antonio Margheriti, who always hid behind the Anglicised pseudonym of Anthony M. Dawson. The series began with The Wild, Wild Planet (1965), continued with The War of the Planets (1965), which should not be confused with War Between the Planets here as many genre commentators have done, and then finished with The Snow Devils (1967). All of these films took place in the futuristic milieu of the United Democracies Space Command aboard the space station Gamma 1 and alternated between starring Tony Russell or Giacomo Rossi-Stuart.

Despite the colourful cheapness of some of Antonio Margheriti’s earlier space operas, War Between the Planets emerges as one of his duller efforts. Some of the other entries, notably the wacky The Wild, Wild Planet, had numerous different plot elements going on, but there is not much that happens here. The first hour of the film’s running time consists of the astronauts on the space station spouting technical doubletalk (which is scientifically nonsensical). The journey to and landing on the planetoid takes up the last twenty minutes. When they do get to the asteroid, the plot is a recycle of Battle of the Worlds (1961), one of Antonio Margheriti’s earlier space operas, albeit unconnected to the Gamma 1 series, which likewise concerned an expedition to investigate a rogue planet.

With War Between the Planets, Antonio Margheriti aims more ambitiously than in his earlier entries – in the creation of a futuristic city, a space station, space walk sequences and the landing on an alien world – but largely fails through impoverishment of budget. The city sets and rockets circling the volcanic planetary landscape are obviously models, while the space station can be seen wobbling on its support wire. At one point, when the three rockets set off to rendezvous with the asteroid, the ignition of their jet flares unintentionally illuminates the hidden wall behind them. The EVA sequences with the astronauts travelling out on their tethers is imaginatively conceived but fails through the numerous clearly visible support cables that we see holding the actors up. Not to mention some of the unscientific moves that this result in, like seeing the astronauts swaying back and forward in zero gravity. (There are some decidedly dodgy scientific ideas bandied about throughout the film, including at several points the notion of wind in space).

The roles in these Italian films were always wooden and the performances further ruined by the hack-handed English-language dubbing. Giacomo Rossi-Stuart comes across as too hot-headed and cross playing the commanding officer – you wonder how someone like that ever ended up in a command position.