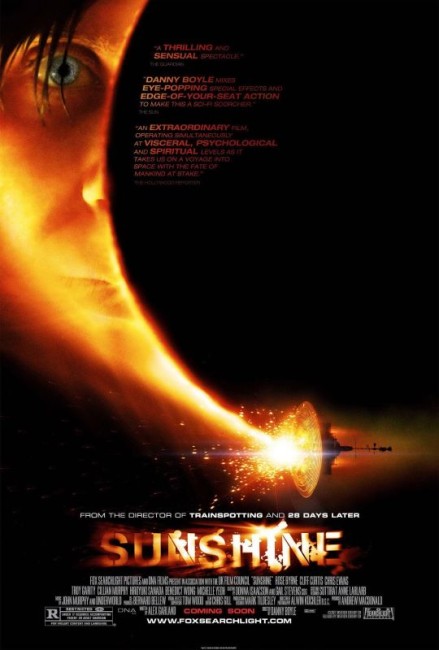 The sun is dying and the spaceship Icarus 2 and its crew of eight are on a mission to drop a bomb that will reignite it. The ship is built with a massive shield that protects it from the direct heat of the sun, which incinerates anything that is unprotected. On a traversal of Mercury, the crew are startled to pick up a distress call from the previous mission Icarus 1, which went missing and was believed destroyed. A decision is made to detour to investigate after the physicist Capa argues that they would be better off travelling on towards the sun with two payloads instead of one. During the course change, they forget to correct the angle of the shield, inadvertently causing damage to the ship and a fire that incinerates the ship’s oxygen gardens. They dock with the Icarus 1, finding an abandoned ship. Someone then ruptures the airlock tether connecting the ships, abandoning three of the Icarus crew on the dead ship. Upon returning to the Icarus 2, they discover that someone else is aboard.

Manchester-born director Danny Boyle became a promising name in the 1990s, emerging out of British television dramas, having directed among others the superb mini-series Mr Wroe’s Virgins (1993). Boyle appeared on cinema screens first with the sharp and blackly funny thriller Shallow Grave (1994) and then the worldwide cult hit of Trainspotting (1996), which had him acclaimed as a hot new talent. Boyle’s subsequent ventures into the American mainstream were uneven affairs. These included A Life Less Ordinary (1997), a mix of abduction comedy and a fantasy film that failed to come off, and especially the flop of the Leonardo Di Caprio starring The Beach (2000). After The Beach, Boyle found himself at a loose end. His next films, Vacuuming Completely Nude in Paradise (2001) and Strumpet (2001), ended up only being screened on tv and at a handful of film festivals. Boyle’s second coming was with 28 Days Later (2002), a low-budgeted end of the world film that ended up being a surprise international hit, as well as sparking off the current fad for zombie film revivals. 28 Days Later put Danny Boyle’s name back on the map. In a seeming attempt to show his versatility with every conceivable genre, Boyle next went onto make a children’s film with Millions (2004), and then took on the hard science-fiction film with Sunshine, before the award-winning smash success of Slumdog Millionaire (2008), the acclaimed survival film 127 Hours (2010), the mind-bending hypnotism thriller Trance (2013) and the biopic Steve Jobs (2015), as well as returning to genre material with a theatrically live broadcast stage adaptation of Frankenstein (2011) and the alternate history Yesterday (2019).

The script for Sunshine is written by Alex Garland. Alex Garland is best known as a novelist with works like The Beach (1996), a work about a backpackers utopia that became a cult classic; The Tesseract (1999), a Thai-set work that tells the differing stories of various intersecting characters, which was later filmed by the Pang Brothers; and The Coma (2004). While most of Alex Garland’s books have usually been set in the real world and used Thailand as a location, on film he has taken to science-fiction. Despite the abortion that Danny Boyle made out of the film adaptation of The Beach, which is surely one of the worst ever adaptations of a book to screen, Garland collaborated with Boyle for his first screenplay 28 Days Later. They retain their partnership here on Sunshine and elsewhere Garland has delivered scripts for the genre likes of the excellent organ harvesting film Never Let Me Go (2010), the comic-book adaptation Dredd (2012), the long-announced remake of Logan’s Run (1976) and the proposed Peter Jackson adaptation of Halo. Garland made his directorial debut with the excellent artificial intelligence film Ex Machina (2015), which was followed by Annihilation (2018).

Sunshine would seem to be Danny Boyle’s attempt to create his own 2001: A Space Odyssey (1968). [At one point, Boyle was attached as director of Alien: Resurrection (1997)]. There are points of similarity between Sunshine and 2001 – both concern a momentous space voyage through the Solar System that comes apart from within due to mechanical error and sabotage. In both cases, with Stanley Kubrick bringing science-fiction writer Arthur C. Clarke on board in 2001 and in Alex Garland’s screenplay here, the journey has been depicted with great scientific rigour.

There is a hard science geek in one that kept buzzing at some of the ideas that Alex Garland floats by – the notion of the ship having to hide behind a massive heat shield that screens it from the raw exposed temperatures of the sunlight and the image of a transmission dish being incinerated when it passes into the direct sunlight. The film opens on a wonderful piece of writing with Cliff Curtis sitting in the observation room and asking the ship’s computer to turn the level of sunlight up to an actual level, only to be told that he cannot withstand to see it at more than 3.1%.

The concept of the sun being about to die is an implausible one – something that is not likely to happen anytime in the next few billion years in actuality. The film also fudges the issue of artificial gravity – we never see the ship rotating for there to be any of the Earth-like gravitic conditions so the astronauts should technically have been floating throughout – but it is nice to see a science-fiction film that has gone to the realistic extent of thinking about problems like recycling air in space and showing a hydroponic garden created for dealing with such.

Boyle and Garland have structured most of the dramatic scenes in Sunshine around these hard science set-pieces and this is when the film works the best – the scenes where Cillian Murphy and Hiroyuki Sanada must venture out to the edge of the heat shield in spacesuits to repair the damage; the explosion in the hydroponic garden; Chris Evans’s efforts to repair the computer while diving into icy cooling fluids; Cillian Murphy’s race to unleash the payload at the climax; and especially the scenes where four of the crew are trapped inside the Icarus 1 after the airlock tether is ruptured and they find themselves with only a single spacesuit where the only solution is to wrap themselves in cladding and blast themselves across a void of open space that is at –217 degree temperatures.

What I also liked about Sunshine was that Danny Boyle has made an effort to create an international crew. Three of the crew, including the captain, are Asian, which it could be guaranteed you would never see in an American science-fiction film, making this one of the few international expeditions on film that somewhat approximates the makeup of the world’s population. Boyle also casts relatively unknown actors. The most well known of these is Cillian Murphy who came to name attention as a result of Boyle’s 28 Days Later and Hong Kong actress Michelle Yeoh best known to Western audiences for Crouching Tiger, Hidden Dragon (2000), as well as British actor Chris Evans, alias Johnny Storm in Fantastic Four (2005) and later Captain America to the Marvel Cinematic Universe, who gives the best performance in the film.

For all that Boyle and Garland do an impressive job at setting Sunshine up as a hard science-fiction film, the results end up disappointing. As with 28 Days Later, Danny Boyle directs in a tight constricted way with much wandering camera moves and quick cuts that are often (as in the climax) difficult to follow dramatically. Indeed, while Boyle may have had the idea of crafting something akin to another 2001, what Sunshine comes out reminding of more is a host of other science-fiction films that have been big flops such as both Mission to Mars (2000) and Red Planet (2000), two quite decent films detailing credible hard science journeys through the Solar System, which were savaged by audiences and box-office flops.

The plot of Sunshine feels like a combination of two other films – the ridiculous The Core (2003) about a team of people on a mission to the centre of the Earth to detonate a bomb that will start the Earth’s magnetic core spinning again, and especially Solar Crisis (1990), which had a near-identical plot about a mission to the sun to fire a bomb that will reignite it, where the mission was also endangered by accidents and sabotage. Both of these were flops – The Core ended up being laughed off cinema screens, while the not-bad Solar Crisis was released directly to video.

The most disappointing part of Sunshine is the direction the plot takes in the last third. Here Alex Garland veers off from a promising hard science plot into the tired and hackneyed. The plot elements that are brought together – the crew diverting to investigate a distress signal from an abandoned spaceship; someone or something inadvertently sneaking on board the ship and attacking the crew; the accidents that nearly derail the mission – lazily draw upon a body of cliches that grew out of Alien (1979) and imitators. In fact, what Sunshine starts to become at this point is a variation on another big flop Alien-influenced science-fiction film Supernova (2000), which was about the crew of a space mission picking up a sole survivor of a disaster who turns out to be dangerous.

The whole Pinbacker element – where Garland seems to be making a clear in-reference to another space mission gone amok film, the comedy Dark Star (1974), which featured a Sergeant Pinback as one of the main characters (as well as a comedic plot about a crew dropping bombs to blow planets up) – is poorly developed. Danny Boyle irritatingly keeps the camera out of focus and overexposed every time that Pinbacker appears on screen – and we never find out whether what we are dealing with is someone who has gone mad from being abandoned alone in space or whether Pinbacker’s hideously burned appearance means that he has mutated or has been burned by exposure to too much sunlight or what. Considering that a substantial amount of the last quarter of the film concerns this character, the inability on Alex Garland’s part to tell us what is going on during these sections is sloppy writing.

(Nominee for Best Special Effects and Best Production Design at this site’s Best of 2007 Awards).