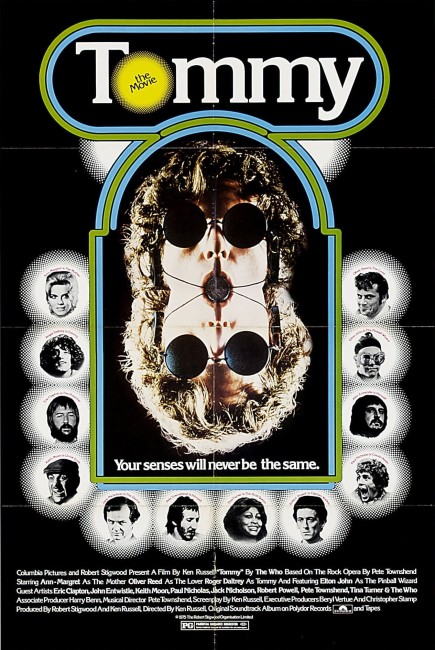 During World War II, Nora meets RAF Captain Walker and they marry. He is then shot down on a bombing mission. She gives birth to a son Tommy on Victory Day and is left to raise him on her own. She goes to live with her cousin Frank who runs a holiday camp. When Tommy accidentally walks in on the two of them in bed together, the shock of seeing this drives him deaf, dumb and blind. Frank buys a striptease joint but there another cousin Kevin subjects Tommy to drugs, torture and pederasty. Guided by a vision of his father’s ghost, Tommy finds a unique talent for playing pinball. He becomes a superstar, playing pinball before millions. After he miraculously regains his faculties, Tommy becomes a messianic figure.

I come not to bury Ken Russell, but praise his name. Russell first emerged to acclaim in the early 1970s with films like Women in Love (1970) and The Music Lovers (1971). Gradually it became apparent that while Russell had been initially hailed as a new arthouse director, with scrupulously acceptable subjects like adaptations of D.H. Lawrence and his biographies of the famous classical composers, underneath he was a total nutter. Russell’s demented excesses had always been bubbling away below the surface but it first emerged in full force in his whacko rock biography of Franz Listz, Lisztomania (1974) (which first paired Russell up with The Who’s Roger Daltrey, and gave Daltrey the decidedly unadvised secondary career as an actor).

Ken Russell’s dementia reached its heights with Tommy, based on The Who’s 1969 double-album of the same name (which was a loose autobiography of Pete Townshend’s own troubled childhood). It became clear that underneath the veneer of respectability, Ken Russell in fact had the creative ambition of a smutty schoolboy obsessed with tits, bums, blasphemy and poking his tongue out at the conservative establishment, all of which had somehow become intertwined with the garish psychedelic excesses of the glitter rock generation. By the 1980s, it seemed that any of Russell’s earlier pretensions toward the literary classics had collapsed into smut and campy excess; by the 1990s, even that was starting to seem a parody of a parody.

Nobody performs excess quite like Ken Russell and in terms of pure Russell excess there is no work that uniquely embodies his unrestrained lunacies more than Tommy. To say that the film is simply an opportunity for Russell to go over the top is like saying King Kong is merely another monkey – this is the sort of film where one can see Russell sitting in bed popping tabs of acid to get inspiration for the next day’s shooting.

Almost everybody hates the film, especially Who fans. However, in terms of surrealistic glitter rock dementia you can hardly beat Tommy for all-out hilarity. Among Russell’s gaudy welter of imagery is a church that worships a ten-foot statue of Marilyn Monroe doing the Seven Year Itch (1955) dance while masked handmaidens circulate to administer communion of hard spirits; Tina Turner and her infamous Acid Queen dance where she is transformed into a glittering chromium Iron Maiden filled with syringes and gets to drag Roger Daltrey into her interior and shoot him up; and a joyously naughty musical S&M sequence where Daltrey is held down over a toilet with a paper bag over his head, is whipped with a wet towel and then planted on a toilet seat with nails around the rim, before being hosed down and then ironed dry.

Ken Russell is abetted by the unleashed mugging of Oliver Reed and Ann-Margret. Particularly memorable is a sequence with Ann-Margret in fur coat cavorting on the floor of a hotel room while humping a giant pillow as a tv set vomits a torrent of chocolate and champagne forth all over her. How she managed to earn a Best Actress Oscar nomination for the role from the normally conservative Motion Picture Academy is one of the wonders of the modern world.

It is a gaudy, mad film. Trying to make any sense of it is near impossible. Only Roger Daltrey’s blank, idiotic performance fails to work. Yeah I loved the film, so there is my credibility gone.

Ken Russell’s other films of genre interest are:– the spy film Billion Dollar Brain (1967); the historical witch persecution film The Devils (1971); the sf film Altered States (1980); the psycho-sexual thriller Crimes of Passion (1984); Gothic (1986), centred around the events leading up to the inspiration for Mary Shelley’s writing Frankenstein (1818); the spoofily over the top adaptation of Bram Stoker’s The Lair of the White Worm (1988); Mindbender (1996), an hysterically bad biopic of the psychic Uri Geller; The Fall of the Louse of Usher (2002), Russell’s demented home movie take on Edgar Allan Poe; and an episode of the horror anthology Trapped Ashes (2006).