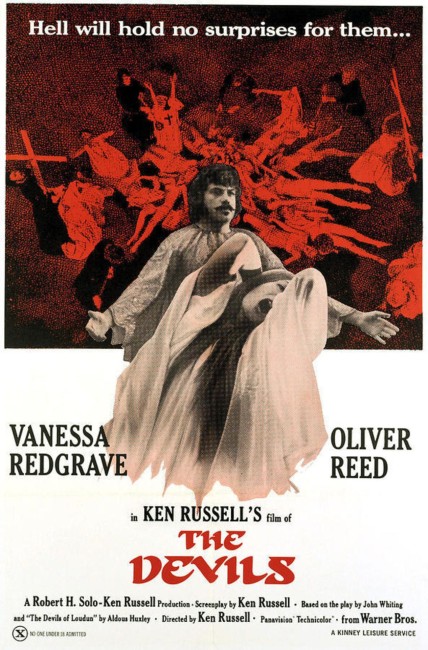 In 1634, the town of Loudon is a walled Protestant stronghold that has just reached a tenuous peace with the rest of the overwhelmingly Catholic France. However, the Catholic Cardinal Richelieu, who has the decadent King Louis XIII’s ear, desires to tear the walls of Loudon down. Loudon is ruled by Father Urban Grandier. Grandier is a carnal priest who has gotten one woman pregnant and marries Madeleine Dubrous in a secret ceremony he himself conducts. In the local Ursuline convent, the mother superior Sister Jeanne has sexual fantasies about Grandier. When Grandier declines to become their patron and when she learns of his marriage, Sister Jeanne becomes hysterical and makes up stories of how Grandier engaged in orgies with the nuns. Richelieu capitalises on the story and dispatches a witch-hunter to extract confessions from the nuns and force Grandier to admit to being a witch.

The success of Michael Reeves’ Matthew Hopkins – Witchfinder General/The Conqueror Worm (1968) created a mini-genre of historical witch persecution films. Most of these quickly became nasty exploitation pieces that made a virtue of their torture scenes, most notably Mark of the Devil (1970) and Jesus Franco’s various sado-sexual efforts. The Devils, which is based on a historically documented incident, is the finest and most literate film to come out of this cycle. The film is based on John Whiting’s 1961 play, with in turn adapts Aldous Huxley’s non-fiction book The Devils of Loudon (1952).

The Devils was made by Ken Russell, who was then only an emergent name, with a number of acclaimed tv dramatisations of classical artists and composer’s biographies, and four films, including his celebrated adaptation of D.H. Lawrence’s Women in Love (1970) and his Tchaikovsky biography The Music Lovers (1971), to his name. The Devils is one of the finest of Ken Russell’s films.

Throughout his films, Russell takes a schoolboyish delight in courting outrage. The Devils is filled with typically Russell-esque touches – self-flagellating nuns, piles of rotting plague victims and corpses tied to wheels, sexual fantasies of nuns fucking Jesus Christ, and nun mass orgies. Of all of Ken Russell’s films, The Devils is one that contains his outrages within a plot. There is a beautifully literate script – the dialogue positively sings at times. The surprise is that it is from the pen of Russell himself, although one suspects based on the relative hamfistedness of many other Russell-penned scripts, that this more due to Russell preserving the essence of John Whiting’s play intact than any writing of his own.

The Devils makes for fascinating comparison when placed up against The Exorcist (1973), which came out two years later. (The two would make a great double-bill). The Exorcist held that demonic possession was real and actual and that the Catholic Church was just and holy in stamping it out.

On the other hand, The Devils holds the view that demon possession was a product of hysteria, that it was formed out of sexual repression and was brutally stamped out by a corrupt Church either as a tool of oppression or by insanely deluded fools. In fact, rather than a possession story like The Exorcist, The Devils comes out closer to Arthur Miller’s The Crucible (1954) about an innocent persecuted by frenzy and hysteria. The contrast between the two films is remarkable. The alarming thing for those frightened into believing in the existence of demons by The Exorcist is that of the two The Devils is based on historical truth.

There is a lot of greatness to the film. Oliver Reed considered Grandier his finest role and he is at his most sexually charismatic. The production design, whereby the entire town of Loudon, even the convent, has been built out of white brick tiling, such that the film seems to be taking place inside a giant antiseptic sanitarium, is striking. [The production designer is no less than later-to-be arthouse director Derek Jarman – see The Tempest (1979)].

Ken Russell’s other films of genre interest are:– the spy film Billion Dollar Brain (1967); the deranged and surreal adaptation of The Who’s rock opera Tommy (1975); the mind-bending sf film Altered States (1980); the psycho-sexual thriller Crimes of Passion (1984); Gothic (1986), centred around the events leading up to the inspiration for Mary Shelley’s writing Frankenstein; the campy Bram Stoker adaptation The Lair of the White Worm (1988); Mindbender (1996), a biopic of the psychic fake Uri Geller; The Fall of the Louse of Usher (2002), Russell’s demented home movie take on Edgar Allan Poe; and an episode of the horror anthology Trapped Ashes (2006).