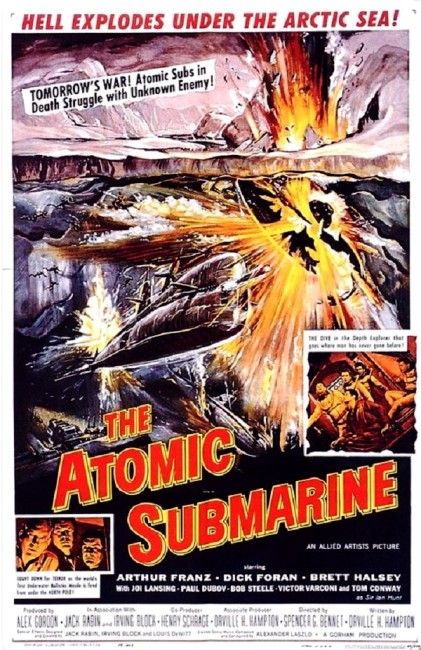 Commander Dan Wendover, captain of the US atomic submarine Tiger Shark, is assigned to investigate after a number of submarines under have disappeared under the Arctic ice cap. As they venture into the same waters, Wendover and his crew discover that the agency behind the attacks is a living alien flying saucer that hides beneath the ice cap.

The Atomic Submarine is generally regarded as a routine 1950s B science-fiction film. All genre commentators for some reason quickly gloss over and dismiss it. However, watching it, The Atomic Submarine proves to be surprisingly good. It is one of those films that is just prevented from reaching minor classic status by its budget (which allows, in particular, for some incredibly unconvincing model submarine effects) and perhaps the need for a better director. (The director in this case was Spencer Gordon Bennet, a prolific serial director).

Even as it is though, the film is modestly effective. Conceptually, it has been designed as a combination of the alien invader film and the then burgeoning submarine thriller begun with films like The Enemy Below (1957) and Run Silent, Run Deep (1958). It is probably a natural convergence between both genres, considering how rooted in the Cold War mentality both are.

Spencer Bennet directs with a cleanly stripped, no-nonsense style, all conveyed in a documentary-like manner replete with a didactic voiceover that talks of the importance of the impending mission in the momentous melodramatic tones of a newsreel commentator. Most of the effectiveness the film has rests in the build-up up to the meeting with the saucer. The structuring of the cat-and-mouse game with the saucer – the mystery in trying to figure out what it is, the hunt, the attempts to stop it and their various failures – have all been thought out with unexpected tension.

There is something genuinely science-fictional here – a very John W. Campbellian story of strong men meeting with the alien and trying to work out its nature and defeat it. In fact, The Atomic Submarine has a far better sense of building to a meeting with a mysterious Other than the whole of the somewhat similar The Abyss (1989) and its building to a meeting with its aliens. The cyclops, although only a hand puppet that never appears in the same shot as any of the actors, looks genuinely alien. The climax plays with science-fictional ideas that are well ahead of their time, such as a living saucer capable of regenerating itself.

Arthur Franz’s confrontation with the alien and his brutal answer to its offer to join him – that of raising his gun and shooting it in the eye, “You need to see to navigate, then take this” – reiterates Cold War issues with abrupt violence. Yet for all its Cold War attitudes, the film includes an intriguing ongoing dialogue between Arthur Franz and Brett Halsey where the macho Franz snidely attacks Halsey for his determinedly pro-pacifist, anti-militaristic, anti-war stance. In painting Franz’s attitudes as hot-headed and less than desirable, the film runs very much against the grain of all others 1950s science-fiction films and into some intriguing grey areas.