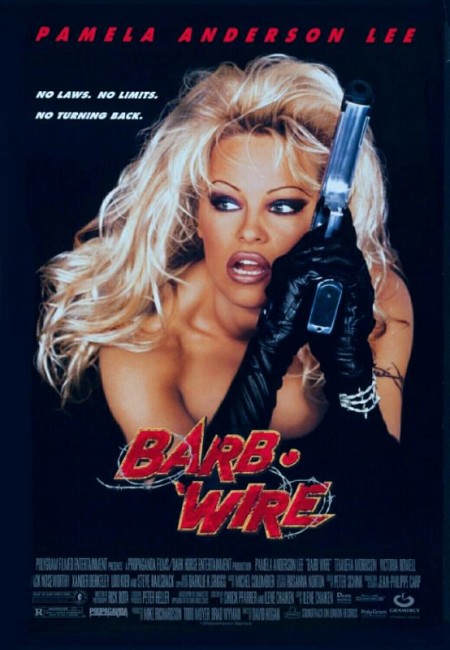 It is the year 2017. America is in the midst of the Second Civil War and ruled by the tyrannical Congressional Directorate. The only remaining bastion of freedom is the anarchic city of Steel Harbor. In Steel Harbor, the sexy but ultra-tough Barbara Kaminski, who insists on being called Barb Wire, runs the Hammerhead Bar while doubling as a bounty hunter. She becomes caught between sides in a hunt by the Congressionals for a missing scientist who has the antidote to Red Ribbons, a virus created by the Congressionals, in her system. Barb then finds that the wanted scientist is married to and being sheltered by her former army comrade and lover Axel. When Axel comes asking her help, Barb is forced to take sides.

Just what is the problem that reviewers had with Barb Wire? It received some of the most appalling reviews of any film since – since well, the last post-holocaust bimbo comic-book adaptation Tank Girl (1995). One is not quite sure what reviewers were complaining about – it is not as though Barb Wire promised to be anything other than exactly what it delivers, namely a trashily cynical comic-book action movie featuring the pneumatically inflatable Pamela Anderson Lee. It is not even that people have any reason to make the usual complaint that it trashes its comic-book source as the 1994-5 Dark Horse comic-book is exactly the same violent, cynical and unserious silliness that the film is. Mostly though, it appears the problem that reviewers had was Pamela Anderson (then being billed as Pamela Anderson Lee).

Pamela Anderson is a joke. She came to fame through a Playboy layout in 1990 and then appeared on five seasons of Baywatch (1989-2001). A brainless airhead who doesn’t even seem to understand the jokes that are made about her (even to her face – see Ruby Wax’s hilarious 1996 interview) and whose sole talent rests on a set of silicon implants that are only obvious in their exaggerated absurdity, to the infamous home sex video circulating on the net, Anderson became a caricature of a blonde joke. For bitchy gossip columnists and late-night chatshow comedians, she was the equivalent of a barn door – an easy target. There was fascination with trashing this figure that seems more of an inflatable blow-up doll than a real person. When it came to Barb Wire the film, almost every reviewer ended up reviewing Pamela Anderson instead of the film. Even if the film had been less of a B-movie than it is, one suspects that most reviewers would have gone into it with their minds made up.

Barb Wire is not a particularly bad film; it is in fact a modestly enjoyable B-film. It never takes itself too seriously – from its action sequences, to the sight of Pamela Anderson barely managing to keep herself inside her skintight vinyl, to her taking a gun with her into the bath, to its mock Casablanca (1942) ending. It comes with a posed cynicism that is amusing – everyone sneers taunts and talks in comic-book balloons. There is not much of a plot – the business of the contact lenses is just a McGuffin and the Red Ribbons antidote is mentioned once then never referred to again throughout the rest of the film. Steve Railsback has a great deal of fun, decked out in pseudo-Nazi uniform and chewing the scenery with considerable relish.

Pamela Anderson is adequate – she is cast as a bimbo, not for her acting ability and on that front fulfils all that is required of her. On the other hand, Maori actor Temuera Morrison is awful. Snapped up after the international success of Once Were Warriors (1994), Barb Wire was his Hollywood debut. Morrison always had a cold and closed-off aggressiveness – and when tapped by Warriors, this proved electrifying. However, he appears to have no other acting mode and in Barb Wire comes across as merely wooden and about as thick as a plank.

Barb Wire is enjoyably silly and can be forgotten five minutes after one exits the theatre. It is not as much fun as that other underrated post-holocaust bimbo film Tank Girl but is exactly what one expected of it and one can hardly condemn it for that.

Former music video director David Hogan has only made one other film. The most interesting name on the credits is that of co-writer Ilene Chaiken who went onto create tv’s The L Word (2004-9).