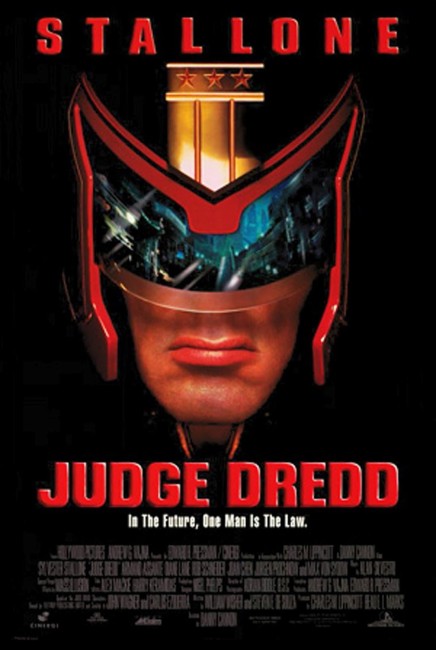 In the 22nd Century, most of America has become a post-holocaust wasteland known as The Cursed Earth and the remaining cities have been conglomerated into vast megalopolises known as Mega Cities. In order to combat the rising crime rate, the Mega Cities have created special police forces known as The Judges who act as judge, jury and executioner and dispense justice with ruthless regard. The toughest of these is Judge Dredd, who has been created as part of The Janus Project, a failed genetic engineering program to create the perfect judge whose other subjects all became psychopaths. The corrupt Chief Judge Griffin helps Rico, Dredd’s psychopathic clone brother from The Janus Program, to escape from prison. Rico then shoots a newscaster using Dredd’s gun. Blamed for the crime, Dredd is sentenced to life imprisonment in The Cursed Earth.

I have been a fan of the Judge Dredd comic-strip ever since the beginning – I still have my copy of 2000 A.D. #2 in which Dredd first appeared in 1977. Since then, Judge Dredd became the star attraction of 2000 AD, developed a huge cult following and went onto international stardom (as evidenced by comic-book crossovers with the likes of Batman, Predator and the Alien saga). The climb culminated in this $70 million film.

Before the film opened, there was a raging controversy amongst the comic’s fans about Judge Dredd appearing in the film without his helmet – something he never did in some 2000 issues of the comic. The controversy is perhaps a forgivable piece of artistic license. One’s own feeling about the so-called ‘Helmet Controversy’ is that if you are using a star name like Sylvester Stallone then it does not make commercial sense to hide his visage. Certainly, the film’s problems are larger than the lack of adherence to such a piece of canon.

Unquestionably, the look of the comic-strip is there – the costumes, the bikes all look right, there are mentions of the Cursed Earth and Block Wars and characters like Pa Angel and Mean Machine turn up, even an ABC Warrior (before someone realised they had copied a design from the wrong 2000 AD strip, leaving the film having to pay extra royalties). Although there are only three credited writers in the final Writer’s Guild arbitration – William Wisher of Terminator 2: Judgment Day (1991); Steven E. de Souza, writer of Commando (1985) and Die Hard (1988); and New Line Cinema producer Michael De Luca, author of In the Mouth of Madness (1995) – the script was passed around just about every major action scriptwriter in Hollywood. Somehow, in the course of doing so everything that made Judge Dredd such a cult item has been diluted out of the film. The film misses by a mile the satire and the pleasure in the wildness of the strip’s ideas. The plot is only the most entry level of Judge Dredd stories. What it direly needs is some of the outrageous concepts that turned up like The Fatties, The Futzies, the Hell St Blues, or such character creations as Judge Death, Judge Anderson of Psi Division, Judge Caligula and Walter the Wobot. In its place, comes action movie formula – Judge Dredd gets the merest hint of a love interest with Judge Hershey, is given a comic sidekick and makes the banal discovery of his own feelings.

One of the film’s worst fumblings is its playing of the strip’s tongue-in-cheek neo-fascist attitude toward law enforcement without any discernible sense of parody. There are moments of the amusingly over-the-top police excessiveness familiar to the strip – cars blown up for exceeding pollution levels; a suspect arrested for hiding from a gun battle inside a service droid instead of doing the right thing, which would have been to jump out of a high-rise window. Later however, the film takes such a legal system alarmingly po-facedly, waxing idealistic as Chief Justice Max Von Sydow reflects on the system he has created, and heroically championing Judge Dredd as he returns to enforce the letter of the law. The action genre has always had a decidedly less than liberal attitude towards such issues as civil rights – an outlook Sylvester Stallone seems to support in real life. In jumping aboard the Judge Dredd strip – which is clearly intended as a satire of such reactionary law enforcement crusaders as Dirty Harry – with all the muscular might and unquestioning right of the action genre and with no apparent understanding that the strip is meant to be satire, the film surely ends up as one of the action genre’s most unabashed defenses of outright fascism.

Perhaps the worst thing about the film is Sylvester Stallone’s performance. Stallone plays Judge Dredd with puffed up chest and a deadpan comic naiveté like a bad caricature of his own macho persona. In the strip, the character of Judge Dredd always came with the grim tight-lipped monosyllabism that Clint Eastwood perfected; the way Stallone plays it Dredd comes out as half-Robocop, half socially ill-adept comic foil. The results are awful. Not that Sylvester Stallone is incapable of playing that type of role – he played the grim tight-lipped law enforcement avenger to perfection in Cobra (1986), which he also wrote, and which is an absolute masterpiece in this sub-genre of right-wing kick-ass action movie reactionarism.

There is the sad feeling that Judge Dredd has nothing original to say. For a start, it had the edge taken off it by other films. Blade Runner (1982) did the whole cluttered mega-city background thing first and Robo-Cop (1987) beat Judge Dredd to the punch with the character of the inhumanly efficient lawman dispensing ultra-violent justice and in its satiric background vignettes of the future society. Even though it was there in strip form before these two films, coming on their tails, Judge Dredd cannot help but seem derivative. Despite the wealth of imagination that exists in the source material, the film has taken a tedious route that seems afraid to have gone anywhere imaginative. It ended up being a big financial flop.

Dredd (2012) was a much more faithful revival of the comic-book starring Karl Urban in the title role.

British-born director Danny Cannon had previously only made the crime thriller The Young Americans (1993). Subsequently, he has only made two other films – another crime thriller Phoenix (1998) and the slasher film I Still Know What You Did Last Summer (1998). Nowadays, Danny Cannon has subsequently worked as a director and producer in television, including as an executive producer and director of numerous episodes on tv’s CSI: Crime Scene Investigation (2000-15) and its various spinoffs, the scientific investigator series Eleventh Hour (2008-9), the revival of The Tomorrow People (2013-4) and the Batman prequel series’ Gotham (2014-9) and Pennyworth (2019- ).

(Nominee for Best Special Effects and Best Production Design at this site’s Best of 1995 Awards).