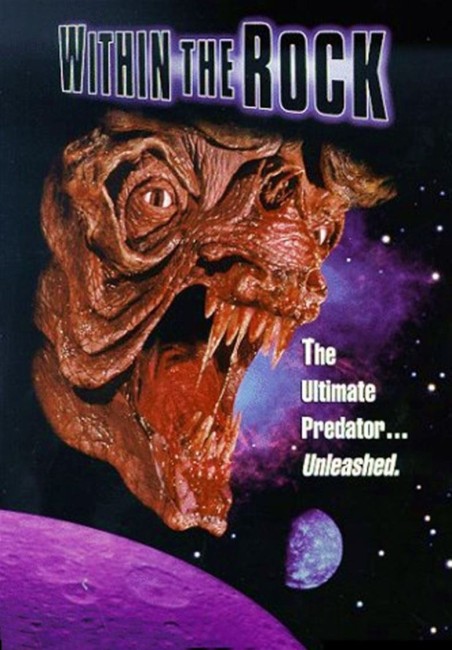 In the year 2019, a moon, nicknamed Galileo’s Child, is discovered heading on an impact course with the Earth. A team of spacefaring drillers are sent up to plant a nuclear warhead that will divert the moon’s course. During the course of the drilling, the team uncover an alien tomb and unwittingly revive a creature that has been placed there by an alien people millennia ago. The creature now emerges and starts slaughtering them.

The film’s premise seems to have been borrowed outright by the mega-budgeted Armageddon (1998) a few years later. There are an alarming number of similarities between the two films – in both films, a group of roughnecks are landed on an astral body that is on a collision course with Earth in order to drill to its core and plant a nuke to divert its path. Of course, the part of Within the Rock‘s story that Armageddon didn’t borrow is the latter two-thirds where the film turns into yet another copy of Alien (1979). However, the similarities are enough to make one wonder. The set-up in the first third is by far the better part of the film – the basic idea is established with a certain verisimilitude, the characters are given a degree of rounded depth over the usual faceless victims that fill most Alien clones, and the discovery of the tomb has an appropriate sense of eeriness.

Unfortunately, once its monster is unleashed, Within the Rock travels down all too familiar grounds. The potentially interesting premise had given hope that it might be more than a run through the familiar cliches but the creature effects, the suspense set-ups and twists are all too familiar. Eventually, the film emerges as nothing more than another routine B-budget Alien copy. The plot never makes it clear how some of the plans to defeat the creature are supposed to work. There are also moments of plotting that are very silly – like when an alien language in binary code is translated and instantly emerges as Old Testament English.

The film has been made on a low budget – we see little of the asteroid, we do see its explosion but never the ship landing on it. Nevertheless, Within the Rock shows Gary J. Tunnicliffe is capable of better things. Certainly, the film is a better debut than Tunnicliffe’s fellow Image Animation supervisor Bob Keen made the same year with the amazingly silly Proteus (1995).