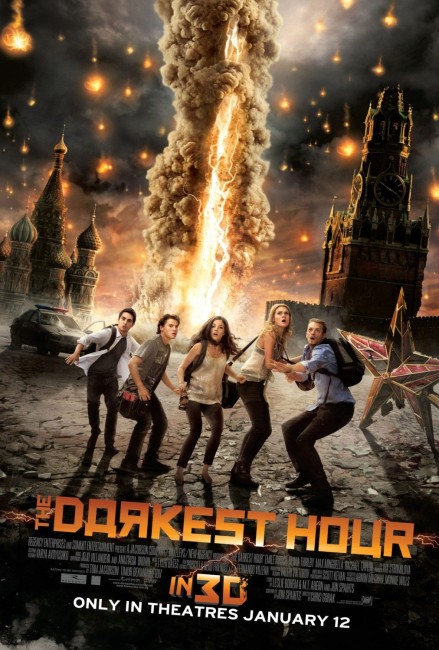 American web designers Sean and Ben fly to Moscow to sell their idea of a social networking site for global travellers, only to find that their Swedish colleague Skyler has stolen their designs and sold the site himself. Commiserating in a local nightclub, they meet two American girls Natalie and Anne. Just then the power goes out. Looking out, they see lights coming down from the sky that spread out and disintegrate every person they touch. The four seek refuge in the club’s basement. When they emerge the next day, they find the entire city deserted, everybody else having been wiped out. As they try to make their way to safety, they find themselves at prey from .invisible alien creatures that track them by their heat signature. Joining a handful of other survivors, they try to find a means of fighting back against the aliens.

The alien invasion film has been making a modest comeback in the last couple of years with reasonable (if not exactly critical hits) of Skyline (2010), Battle Los Angeles (2011) and Battleship (2012). These have made a virtue of being CGI effects-focused alien invasion films. What we have with The Darkest Hour seems almost a mix between Skyline and Cloverfield (2008), the monster movie with a group of twentysomethings trying to survive in the midst of disaster. The sole novelty that The Darkest Hour offers over these others is that the production has gone to shoot on location in Moscow and that the alien invaders are invisible – something that used to be a cost-cutting way to avoid having to produce special effects for low-budget monster movies – see the likes of Invisible Invaders (1959) and Sound of Horror (1965).

The Darkest Hour is a US-Russian co-production that has been made in conjunction with the Bazelevs production company of Timur Bekmambetov. Bekmambetov made a big international noise a few years ago as director of Night Watch (2004) and its sequel Day Watch (2006), before going onto the US to make Wanted (2008) and Abraham Lincoln, Vampire Hunter (2012), as well as having produced 9 (2009), Apollo 18 (2011), Unfriended/Cybernatural (2014), Hardcore Henry (2015) and Unfriended: Dark Web (2018). The director of The Darkest Hour is Chris Gorak, an American production designer and art director who had previously made only one film with Right at Your Door (2006) about the detonation of a dirty bomb in L.A., which had him listed at the time as one of the most promising new directors.

The Russian influence gives The Darkest Hour the potentially interesting twist of being an alien invasion film that takes places with Moscow as a location. This is a remarkable reversal of the situation in the 1950s where the aliens in many of the alien invader films were seen as a thinly veiled stand-in for the Communists. Now, after the fall of the Soviet Union, the very centre of the country (with the Kremlin as a backdrop even) has become a venue where Americans and Russians are standing shoulder to shoulder in a battle against the faceless invaders.

Look a little closer and things go even further than that – for The Darkest Hour is not just about Russian-American cooperation but one that has the spread of American cultural dominion as its central focus. It seems to be a film that is only about the cool of its twentysomething quartet of characters, all of whom are American – even supposedly Rachael Taylor who for reasons inexplicable speaks with her native Australian accent. Any other ethnicity is left for lower down the casting chain – the villain is Swedish, while the Russians are relegated to the supporting cast. Moscow is certainly used for its iconic tourist appeal but most of this seems (in the early introductory sections) to be simply about seeing familiar brand names like McDonalds and Burger King in Cyrillic script – ie. this is a film not about examining the cultural differences and sights of another country but about playing solidly to familiar cultural signifiers in its audience.

It is rare when I have disliked the characters in a film intensely within the first five minutes but everything about the foursome’s culturally self-absorbed hipness grates. The Darkest Hour is entirely about making a film that appeals to contemporary youth audiences. The guys are computer geeks and have lines complaining about having to wear suits and ties rather than T-shirts to business meetings, while the girls seem only identified as being party girls. They come out with lines like “I learned my Russian from watching Rocky IV [1985],” which is cute as throwaway line but astonishingly ignorant in terms of regarding another country’s culture and language.

This unfortunately is the sum of The Darkest Hour, which wants no more than to regard Moscow as a novelty tourist destination and tell a story about how the American gamer geeks and party girls saved the world (as opposed to any of the scientists or soldiers who would have been the heroes in any alien invader film of the 1950s or any other era). There is precisely zero effort made to depict Russia and its cultural differences beyond visiting nightclubs, shopping malls and the highlighting of international franchises.

The latter half of The Darkest Hour is more interesting than the first where the scenes of survival and trying to find a means to combat the aliens take over. That said, The Darkest Hour is never anything more than a special effects vehicle. The script invests almost nothing in the team attempting to discover a means of fighting back – even the principal weapon is one handed to them by someone else. There is almost nothing done with the City Deserted concept – an idea with a rich heritage in apocalyptic genre cinema from Target Earth (1954) onwards – other than it providing novelty locations. Chris Gorak certainly demonstrates a more than competent hand with the effects scenes, which are slickly accomplished, but the film has no more depth than the provision of a series of disintegrations at various intervals, which eventually prove repetitive.

The film comes in the current fad for 3-D – it was at least shot that way rather than converted in post-production, but the results feel astonishingly pointless as the film does precisely nothing in terms of popping objects out of the screen or framing what we see in terms of depth perspective – it is a film that looks exactly the same seen flat or in 3D, the sole difference being that theatre chains were able to bilk an extra three dollars ticket price out of an audience.