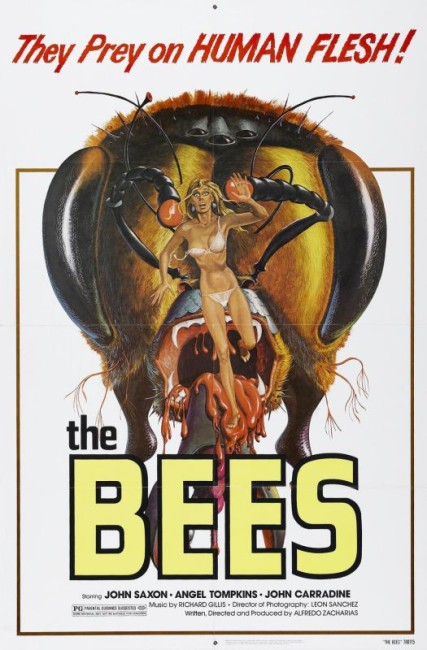 In a UNESCO aviary in Brazil, local bees have been crossbred with African honey bees to form a deadly new species. A young boy is stung to death when his father break into the facility, trying to steal honey. Afterwards angry locals storm the laboratory, during which the bees are accidentally freed and the principal researcher Dr Franklin Miller stung to death. Miller’s wife Sandra travels to New York where she joins her husband’s colleague Dr John Norman in trying to find a means of stopping the bees. Meanwhile, the bees sting their way up the US coast, attacking the Pasadena Rose Parade and all in their path. Sandra’s uncle, eminent bee expert Dr Sigmund Hummel, realises that the bees are intelligent.

The Bees was an opportunistic quickie made to exploit the publicity campaign for Irwin Allen’s big-budget The Swarm (1978). It was clearly made in the expectation that The Swarm would be a huge hit. However, when The Swarm premiered, it was instead loudly trumpeted as an all-time turkey and The Bees promptly sank without a trace. Which is not exactly a great shame as The Bees is not that much better a film than The Swarm was. What can be said however is that it is at least a more honest B-movie than The Swam was.

There has yet to be a convincing killer bee movie – see the likes of The Deadly Bees (1967), Killer Bees (tv movie, 1974), The Savage Bees (tv movie, 1976), Terror Out of the Sky (tv movie, 1978), Deadly Invasion: The Killer Bee Nightmare (tv movie, 1995) and Killer Bees! (2002) – with special effects technology having so far failed to find a means of making a swarm of bees look like anything more than clods of dirt thrown past the camera. Nobody has tried making a bee movie during the CGI effects revolution (at least, anything beyond a tv movie release) – which may well say something about how badly bee movies have been received.

The Bees tries hard and its swarms look moderately convincing. They are effectively added to scenes of crowds panicking and planes crashing. The filmmakers even manage to score footage of the Pasadena Rose Parade, which contains an uncredited cameo appearance from ex-President Gerald Ford. However, it is the absurdity of the rest of the film that sinks The Bees into near-total laughabilty.

The Bees ties itself to the ecological themes that ran through the 1970s cycle of Nature’s Revenge films – The Birds (1963), The Hellstrom Chronicle (1971), Willard (1971), Frogs (1972), Jaws (1975), Kingdom of the Spiders (1977) et al. This is promptly something that causes it topple over into the completely absurd. Everywhere possible the bee attacks are tied to human exploitation – honey commercials play on tv, honey companies are shown trying to import bees indifferent to the potential danger, the Rose Parade contains giant bee floats, and there is a corrupt senator who stole the money that would have built better security for the Brazilian aviary.

The upshot of this is that the bee attacks end up seeming less a grand force of nature and more as though they are out to enact human justice, with ridiculously personalised attack scenes where they take revenge on the senator or sabotage the van containing the pheromone that could wipe them out. However, this sense of morality often becomes self-contradictory – the bees take revenge on the senator for stealing the money that would have built better security for the aviary, although their mentioned intelligence does not seem sophisticated enough to work out that if the security system had been built this would not have allowed them to have broken out of the compound in the first place.

Certainly, the ideas brought up by John Carradine (who plays with an appallingly fake German accent) about bee movements containing communication patterns is an appealingly plausible one but when it gets to scenes with the bees waking John Saxon and Angel Tompkins up out of bed and opening doors for them, the idea topples over into thorough ludicrousness. There is a bizarre ending with the bees invading the United Nations assembly to tell humankind to develop a more eco-friendly attitude.