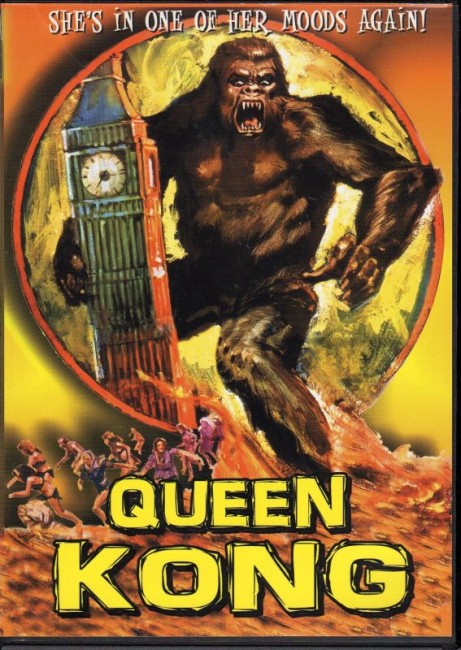 Filmmaker Luce Habit is determined to find the right man to play the hero in her jungle epic. After discovering Ray Fay trying to steal items in London’s Portobello Road markets, she decides this is him. She, Ray and her all-female film crew set forth for the African kingdom of Lazanga Where They Do The Konga aboard the ship Liberated Lady. There they come across a tribe ruled by women. The tribeswomen abduct Ray to serve up in a birthday cake as sacrifice to the giant 64-foot tall female ape known as Kong. Ray and Kong fall for one another. Luce and her crew race through the jungle to Kong’s cave where they capture Kong with gas grenades. They bring Kong back to London where they place her on show at a circus. However, Kong feels jealous when she sees Luce and Ray kissing and breaks out of her chains, rampaging through the city to get him back.

Queen Kong is an absolutely fascinating rediscovery that surfaced on DVD following the Peter Jackson remake of King Kong (2005). In fact, this was about the first time that the world had any opportunity to see Queen Kong. The film was originally made in 1976 where it was one of a host of films that sought to exploit the success of the Dino De Laurentiis remake of King Kong (1976). Others in this mini-fad of King Kong ripoffs include the South Korean A.P.E./Attack of the Giant Horny Gorilla (1976) and The Mighty Peking Man (1977), all of which should be granted a prize place alongside Queen Kong in any list of some of the worst films ever made. So for that matter should the 1976 King Kong and its sequel King Kong Lives (1986).

The infamy that Queen Kong has was that the copyright holders of the original King Kong (1933) sued and won, claiming that the makers of Queen Kong had stolen their plot from them, and prevented the film from being seen. Thus, other than a handful of theatrical screenings back during the day that nobody at the time ever appeared to review, this re-release was the first time Queen Kong has been seen in more than three decades.

Not that Queen Kong is a lost work that is dying to be rediscovered. It is a dreadful film on almost all counts. Although for all the ridicule that one might want to pour on it, it must be said that it follows the plot of the original King Kong far more closely than the 1976 remake did. It even makes an attempt to replicate the fights with the dinosaur and pterodactyl – that is, if you can ignore how bad the special effects are.

There are times that Queen Kong almost seems to be prefiguring the movie parody style created a few years later by Airplane/Flying High (1980). During the initial scenes, director Frank Agrama keeps tossing off madcap visual gags. A troupe of bikinied girls are seen loading the ship with crates that are labelled progressively: Guns, Grenades, And, Monster Tranquilizers, More Stuff, Etc, Etc. There are various gags tossed off at other popular hits of the era – a group of native dancers with rotating heads a la The Exorcist (1973). A shark appears, accompanied by a very tinny version of the familiar ‘der-dum-der-dum-der-dum’ theme from Jaws (1975). Robin Askwith and Rula Lenska debate about it: “I know that tune. It’s on the tip of my tongue.” “Well, it’s nice but you can’t dance to it.” This is followed by the mind-boggling sight of a shark poking its head over the side of the ship wearing lipstick and the legend ‘Lady Jaws’.

Then there are times that the humour enters into the completely surreal. One’s mind is completely boggled by the lyrics of the theme song: “She’s the queenie of my weenie/When I’m feeling mighty spunky, I want to do it with my hunky monkey.” The native language descends to phrases like “oonga boonga woonga” and “sanga banga wanga”. The native village is one where modern civilisation intrudes with wilfully incongruous effect – daycare centres, commercials with natives scrubbing the toilet and stopping to endorse cleaning products, people waiting on a bus stop, products like Konga Cola, ads for American Express, even the local switchboard operator announcing a call for Tarzan.

There are moments that the film has a total silliness that leaves you having to rewind to just make sure you didn’t hallucinate what you just saw – like the image of giant deckchair and table being set up for Queen Kong and then a giant birthday cake being winched up onto the table and Robin Askwith, who looks like a pint-sized blonde Neanderthal glitter rocker, being served up to Queen Kong inside the cake by a chorus line of bikinied dancing girls.

Of course the presence of Robin Askwith, known for a series of excruciating softcore films that began with Confessions of a Window Cleaner (1974), makes Queen Kong fall squarely into the 1970s fad for British sex comedies. Naturally, there is a host of bikini-clad girls throughout – even a man-eating rosebush that sinks its teeth into their butts – although all remain clothed and the film goes no further than a PG-rating.

Once Queen Kong enters the scene, the film tends to resemble a sex-reversed version of the 1976 King Kong. Where King Kong 76 redefined the Kong-Fay Wray relationship in terms of a hip flower child making quips the whole way through, Queen Kong likewise has Robin Askwith cracking an excruciating barrage of one-liners. “You need to cut your nails” he tells Kong, or (of a dinosaur) “He’s all teeth – just like Jimmy Carter.” Queen Kong accidentally knocks him over the side of the cliff and in mid-fall Askwith stops to address the camera: “Well I’ve heard of being kissed off but this is ridiculous.” Rula Lenska announces: “We’ll take her [Kong] back to London. She might’ve been a queen on this island but in London half the guys you meet are queens.” Women run around the jungle in sped-up footage to the accompaniment of Benny Hill music, while a crocodile says “Rubbish.” And there is a debate over whether the captured Queen Kong should be made to wear a chain mail bikini for the sake of decency. Rula Lenska expresses frustration after seeing Robin Askwith snatched up by an ape hand: “So that’s guerrilla warfare.”

The film’s height of silliness is a scene where Robin Askwith and Queen Kong conduct a romance of flirtatious winks. By the time of the climax, the film has stopped taking anything seriously – Queen Kong’s rampage destroys a Ronald Reagan Film Festival; there is a parody of Airport 1975 (1974) with a singing nun aboard an airplane; and a completely ridiculous climax where Robin Askwith persuades the world that Queen Kong is a symbol of Women’s Lib and women rise up everywhere. It might have been funny in a moronic way if Queen Kong had been even slightly competent, but all that we end up with is a really badly made film cynically excusing its own ineptitude by ridiculing itself.

Like every single King Kong related film that came out in 1976, the special effects here are ridiculous and pitiful. There is a shoddy and tatty Queen Kong suit – although to its credit, it does have a surprisingly expressive face. There are some extremely bad papier-mache dinosaurs and a lot of shabby back projection work. The single worst effect is the totally unconvincing model of a plane that crashes into a building during Queen Kong’s rampage.

Frank Agrama is an Egyptian-born director who had directed several films in Arabic before moving to Italy in the 1970s. His one other genre film as director was the zombie film Dawn of the Mummy (1981). Subsequently, Agrama has worked as a producer on works such as the tv mini-series’ Around the World in Eighty Days (1989) and The Lord World (1992), two Sherlock Holmes tv movies starring Christopher Lee and various incarnations of the animated Robotech. In more recent years, while working as a tv executive, Agrama was connected in some of Silvio Berlusconi’s illicit business dealings.