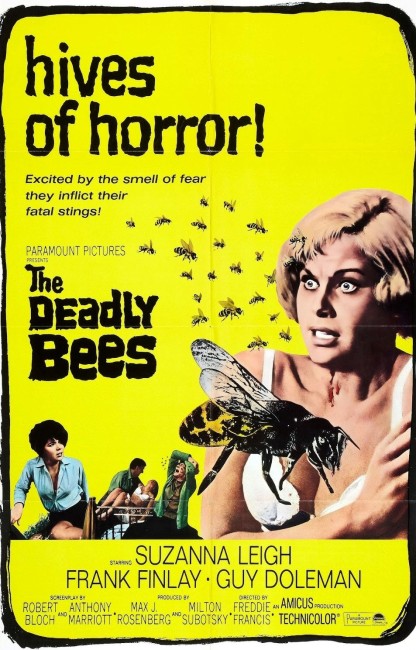 Pop singer Vicki Robbins collapses from nervous exhaustion. Her doctor sends her to stay with Ralph Hargrove, an apiarist friend of his on remote Seagull Island, in order to recuperate. Following a series of bee attacks, Vicki comes to believe that her host may be developing a deadly strain of killer bees, trained to home in on victims that have been daubed with a concentrated adrenalin serum.

There is yet to be such a thing as a good bee movie – that’s bee movie not B-movie. In fact, The Golden Turkey Awards (1980) devotes an entire section to ‘The Most Badly Bumbled Bee Movie of All Time’, nominating The Deadly Bees along with others such as Invasion of the Bee Girls (1973), Killer Bees (tv movie, 1974), The Bees (1978) and the leader in the field, Irwin Allen’s notorious The Swarm (1978). The problems with bee movies seem to start in that bee effects are extremely difficult to do with conviction and there has yet to be a film that makes them look like blurry dots moving in front of a camera lens (mindedly nobody has made a CGI killer bee movie yet). Furthermore, bee movies are something that most casts seem to lack the ability to conduct in straight face.

The Deadly Bees is no exception, despite the presence of distinguished names like Freddie Francis, one of the finest directors of the 1960s Anglo-Horror cycle; a script from horror writer Robert Bloch, the author of Psycho (1960); and it being produced by Amicus, the second most influential horror production company of the Anglo-horror cycle next to Hammer.

Robert Bloch’s script treads all the cliches – the reversal of villain and contrived red herrings hold no conviction. In fact, virtually the same plot was conducted in the Bela Lugosi mad scientist cheapie The Devil Bat (1940) but with bees instead of bats. Freddie Francis, usually a fine stylist, does what he can, but even he has it hard going trying to wring suspense out of clods of dirt optically superimposed over only the foreground, never the background, of a shot. Frank Finlay, looking as though he is stuffed, gives a very unconvincing performance.