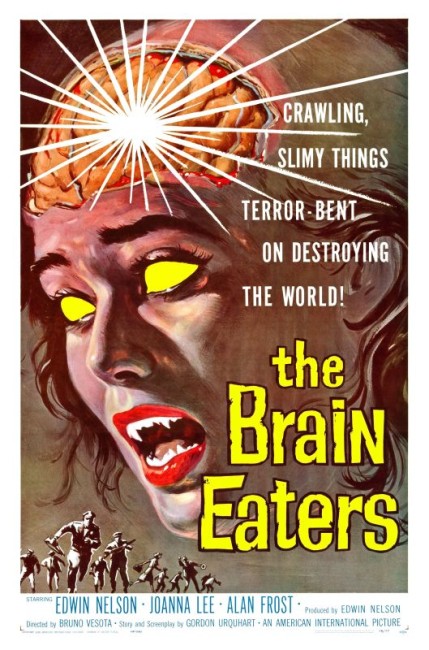 Senator Walter K. Powers flies to Riverdale, Illinois to investigate reports of a mysterious metal cone buried in the ground. In examining the cone, scientists are baffled. Meanwhile, several of the townspeople are behaving strangely. It is discovered that they are infected with alien parasites that dig into the back of the neck and take over the mind, something that invariably proves fatal within several hours. The scientists try to find a means of combating the parasites as the town is taken over and cut off from the outside world.

The Brain Eaters came out at the height of the alien invader cycle of the 1950s. It was clearly designed to exploit the alien body snatchers themes popularised by films like It Came from Outer Space (1953), Invaders from Mars (1953), Invasion of the Body Snatchers (1956) and I Married a Monster from Outer Space (1958). Unlike these others, it is distinctly made as a B-programmer – indeed, The Brain Eaters is a B movie in the literal sense in that it was intended to inhabit the bottom (B) half of a drive-in double bill – it is only 58 minutes long and AIP released it on a double bill with Earth vs the Spider (1958).

The greatest distinction The Brain Eaters usually has in genre footnotes is that it is uncreditedly based on a novel The Puppet Masters (1951) by science-fiction grandmaster Robert Heinlein, author of books like Starship Troopers (1959), Stranger in a Strange Land (1961) and films such as Destination Moon (1950). The relationship between the book and film is unclear – the book is not credited on the film, while various reports would seem to indicate that Robert Heinlein reached a legal settlement with the filmmakers after claiming they took the story from him uncreditedly. The book was later filmed (with credit) as The Puppet Masters (1994).

Necessarily, the film is far less ambitious in scale than the book – in the book, the invaders arrive from outer space in flying saucers while the film has them confusingly seem to arrive from space by burrowing up from the earth. However, the central concept of parasites that control human minds by attaching themselves to the back of the neck remains. Amusingly, neither film version arrives at the solution that Robert Heinlein offers in the book – that humanity has to give up wearing clothes so that people can see whether parasites are attached to the back of the neck or not.

Alas, The Brain Eaters is very much a cheap alien body snatchers film. It fails to contain anything that stands up there with the creepy paranoia of Invasion of the Body Snatchers and the other aforementioned classics. It is shot with flat, prosaic camera set-ups that reveal a rushed shooting schedule and crucially director Bruno VeSota fails to generate any of the paranoid atmosphere that these other films did so well. The plot never winds the situation up much and only seems to consist of running around between various locations. Furthermore, the slug effects are not particularly good or well photographed. There is the odd moment where Bruno VeSota almost crafts something more – he occasionally nods in the direction of atmosphere by tilting his camera at an angle. The scene that works the best here is the one where the group confront Orville Sherman’s oddly behaving mayor in his office.

The director was Bruno VeSota, better known as an AIP bit player. VeSota has minor roles in numerous Roger Corman films – Teenage Doll (1957), The Undead (1957), War of the Satellites (1958), A Bucket of Blood (1959), The Wasp Woman (1959) and The Haunted Palace (1963). VeSota directed upon only three occasions – Jayne Mansfield’s first film, the crime thriller The Female Jungle (1954), this, and the very silly and even cheaper alien invasion comedy Invasion of the Star Creatures (1962).

The one name that later proved of great fascination was that of Leonard Nimoy of Star Trek (1966-9) fame – here billed as Leonard Nemoy. You won’t recognize Nimoy, although his voice is familiar – he plays the aging professor who turns up inside the capsule at the end of the film.