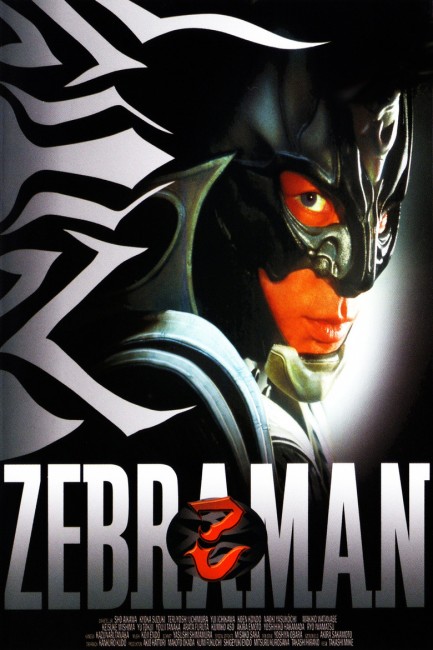 Japan, the year 2010. Two agents from the Defence Force are sent undercover into the suburbs of Yokohama to deal with reports of alien creatures. Shinichi Ichikawa is a mild-mannered schoolteacher raising two children on his own. He is a long-time fan of the 1970s superhero tv series ‘Zebraman’ and has even sewn himself a Zebraman costume. He discovers that Shinpei Asano, a new boy in his class who is wheelchair ridden, is also a big fan of Zebraman. Shinichi is then inspired to put the Zebraman costume on and go out into the streets. Immediately, he encounters a killer in a crab mask who has been possessed by the green blob-like aliens. In battling the Crab Man, Shinichi discovers that he has the real powers of Zebraman. As Zebraman, he leads an attack back as the alien creatures start to emerge and take over people everywhere. After discovering a cache of scripts from the Zebraman tv series, Shinichi realises that everything that has been happening to him was predicted in the tv series.

During the early 2000s, Japan’s Takashi Miike became a cult director with his controversial, boundary-pushing works such as Audition (1999), Ichi the Killer (2001) and Visitor Q (2001). Outside of that, Miike has been a prolific director, making dozens of works in the Yakuza and high-school delinquency genres. On the other hand, soon after gaining a cult audience who was watching everything that he put out, Miike began to get weird and started conducting experiment in just about every genre, putting out head-scratching efforts that made everybody go “huh” – see entirely baffling efforts like the incomprehensible sf/gay prison love story Gozu (2003), Big Bang Love, Juvenile A (2006), the Japanese Western Sukiyaki Django Western (2007), God’s Puzzle (2008) and the utterly madcap YatterMan (2009).

Zebraman is definitely one of these head-scratchers. Ostensibly a superhero film, it is Takashi Miike taking on a genre of Japanese television superheroes that flourished during the 1960s/70s with series like Ultraman (1966-7) and in particular Kamen Rider (1971-6), the show that seems to have influenced this with its motorcycle-riding superhero fighting rubbery aliens. You get the initial impression that Miike set out to spoof the genre – an earlier scene from the tv series shows the amusing idea of a Kamer Rider-like hero fighting off Sadako from Ring (1998) and sequels.

From the premise – milquetoast schoolteacher puts on a self-made costume from his favourite tv series and goes out to fight crime – you get the impression that Zebraman is prefiguring the superhero-with-no-powers spate of usually comedic films that came along a few years later with the likes of Special (2006), Defendor (2009), Griff the Invisible (2010), Kick-Ass (2010) and Super (2010). The head-scratcher then comes that despite setting the film up as a parody of the 1970s Japanese tv superhero and/or a variant on the superhero-with-no-powers comedy, Miike does none of these things.

In an ill-explained twist, soon after putting on the costume, Sho Aikawa, unrecognisable as the detective protagonist from Miike’s Dead or Alive (1999) and sequels, gains the actual powers of his fictional tv counterpart and starts kicking alien monster butt. (How he gets his powers and how everything that happens seems to have been predicted by the scripts for the tv series, which would appear to be written by aliens that crashlanded on Earth in the 1970s, comes with an annoying vagueness of explanation).

There seems little discernible spoofery in these scenes – mostly the film seems to be playing its take on the 1970s tv superhero straight, while the ironic contrast between the image of the superhero and the grim reality that films like Defendor, Super et al play on is quickly forgotten apart from a single early scene where Sho Aikawa tears the seams in his costume as he tries to do poses in it.

Zebraman feels like it needed more of the wacky gonzo approach of Miike’s subsequent YatterMan, which was based on an actual superhero series from the 1970s rather than a made-up one as here. With no discernible comedic or tongue-in-cheek tone, all that that leaves one with is what seems to be no more than a straightforward homage to the 1970s Japanese tv superhero.

The problem with this is that Zebraman is produced on a low-budget. Most superhero films gain their strength from having epic-sized dust-ups between superheroes and villains or monsters. I kept expecting Zebraman to emerge as something akin to Big Man Japan (2007) and its wackily absurd take on the genre. Zebraman, by contrast, never seems to leave the backstreets of a few city blocks. All that Miike offers up in this department are a few superheroic battles with the alien blob creatures that feature some very weak CGI.

Takashi Miike’s other genre films are:– Full Metal Yakuza (1997), a yakuza/cyborg film; the teen film Andromedia (1998) about a schoolgirl resurrected as a computer program; The Bird People in China (1998) about the discovery of a lost culture; Audition (1999); the Yakuza film Dead or Alive (1999), which comes with a gonzo sf ending; the surreal Dead or Alive 2 – Birds (2000); the six-hour tv mini-series MPD Psycho (2000) about a split-personalitied cop tracking body-hopping terrorists; the surreal black comedy The Happiness of the Katakuris (2001); Ichi the Killer (2001), a Yakuza film with some extreme torture scenes; the controversial taboo-defying Visitor Q (2001) about a mysterious visitor; the Cyberpunk future-set Dead or Alive: Final (2002); the surreal Yakuza film Gozu (2003); One Missed Call (2003) about ghostly cellphone calls; the ultra-violent Izo (2004) about a cursed, immortal samurai; an episode of the horror anthology Three … Extremes (2004); the fairytale Demon Pond (2005); the supernatural fantasy epic The Great Yokai War (2005); Big Bang Love, Juvenile A (2006), a prison murder mystery with SF elements; the SF film God’s Puzzle (2008); YatterMan (2009), a gonzo live-action remake of a superpowered anime tv series; the videogame adaptation Ace Attorney (2012); Lesson of the Evil (2012) about a murderous high school teacher; As the Gods Will (2014) with high school students being slaughtered by a doll; Over Your Dead Body (2014) wherein the roles in a ghost story play come to replay themselves in the lives of the actors; the gonzo horror film Yakuza Apocalypse (2015); Terra Formars (2016) about giant mutated cockroaches on Mars; Blade of the Immortal (2017) about an immortal samurai; JoJo’s Bizarre Adventure: Diamond is Unbreakable – Chapter 1 (2017); Laplace’s Witch (2018); and The Great Yokai War: Guardians (2021).