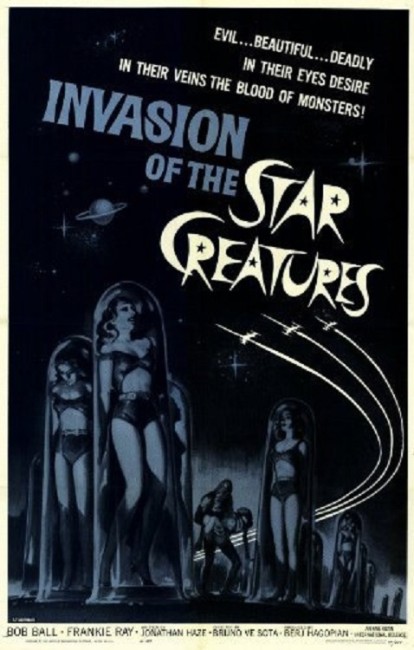 Philbick and Penn, two idiotic privates stationed at the missile base at Fort Nicholson, are assigned to join a unit that is investigating a new impact crater. In the caves there, the soldiers are attacked and pursued by alien vegetable men. Philbrick and Penn are captured by two alien women, Professor Tanga and Dr Puna, who come from the planet Kalar and have been trapped on Earth. They have built a rocketship and are planning to return home and decide to take Philbrick and Penn with them. The women seek to drain information from the men’s head but the men instead introduce them to the notion of a kiss in order to confuse them and make an escape.

Invasion of the Star Creatures was an alien invasion comedy. It was clearly birthed out of the great alien invasion film fad of the 1950s but made at a point when the genre had almost completely tapered off. It was made by several hangers-on at American International Pictures. Director Bruno VeSota was an AIP bit player and had minor roles in a number of Roger Corman films – Teenage Doll (1957), The Undead (1957), War of the Satellites (1958), A Bucket of Blood (1959), The Wasp Woman (1959) and The Haunted Palace (1963). VeSota directed upon only three occasions – Jayne Mansfield’s first film, the crime thriller The Female Jungle (1954), and the B-budgeted body snatchers film The Brain Eaters (1958), while this was his last film. Screenwriter Jonathan Haze was another AIP bit player who had roles in numerous Roger Corman films, most famously as Seymour Krelboin in The Little Shop of Horrors (1960). This was the only script that Haze ever wrote.

1950s science-fiction cinema had some peculiar takes on the war of the sexes. Most common were a spate of films such as Abbott and Costello Go to Mars (1953), Cat-Women of the Moon (1953), Fire Maidens of Outer Space (1956) and Queen of Outer Space (1958). In all of these, astronauts ended up on a planet inhabited by women who they promptly put in their places with the introduction of some good old fashioned loving. Slightly less common was a spate of films in which alien visitors came to Earth to procure men or women for breeding purposes as in Devil Girl from Mars (1954) and Mars Needs Women (1966).

It is not long into Invasion of the Star Creatures when you realise that you are watching one of the great unrecognised bad movies of all time. The comedy in the film quickly slides into the painful. It begins from the opening scenes with the hijinks between the two idiotic army privates Bob Ball and Frankie Ray that involve them fooling around with an out of control high-pressure hose, Ball talking about wanting to try out for the astronaut program and deciding to cram himself into a garbage can whereupon Ray throws a lit cigarette in. There is Slick Slavin as their sergeant who seems like a leftover beatnik and peppers all of his dialogue with phrases like “man” and “cat.” Then there comes the introduction of their commanding officer (Mark Ferris) who gives a briefing while strutting about and gesticulating in every direction with variously a sword, a gun and a grenade.

Things rapidly nosedive when the two idiots encounter the aliens. Firstly, there are the vegetable creatures that are the alien men (and are grown in planter pots – something that cannot help but lead to some interesting speculation about how sexual reproduction occurs on Kalar). These are some of the very worst monster costumes to come out of the 1950s alien invader fad and look like ambulatory versions of leeks that have gone several days past their due date.

Some of the scenes with the vegetable men are thoroughly embarrassing – like where VeSota sets up a Keystone Kops routine where the soldiers flee through the openings on either side of the cave, followed by the creatures, both pursuing the other back and forward from one side to the other. Even worse is the scene where they escape from the caves and we get a montage of scenes with Ball and Ray outwitting the vegetable men, hiding behind tree trunks and running around the other side, sliding back and forward between their legs. All that seems missing is the requisite undercranked camera and piano score.

And then there are the alien women. For some reason, the actresses cast are (or are at least filmed as being) over a foot taller than the men. The men’s response as soon as the women appear is to stand about with their tongues on the floor where every second line of dialogue is about how hot the women are, the things they’d like to do and so on. In some of the most extreme examples of sexism in this alien women niche, the women’s brains short circuit when are kissed and they seem to momentarily lose all capacity for reason. The end of the film comes when the women surrender to the men who are already joking about making them wives, likening marriage to slavery and thinking it is a good idea to marry them “because they can’t go home to mother.” We then cut to the party leaving the caves where the women have been made to carry the packs of heavy equipment while the men march alongside whistling It’s a Long Way to Tipperary (1912).

Things become even worse with the introduction of a group of Indians. What they are doing in the film is anybody’s guess. The most likely reason would seem to be that Bruno VeSota was able to corral a group of extras and costumes for the day. These scenes have an embarrassing amateurism, least of which is that none of the actors seems to have much of the idea what they are doing there. Even worse though is the racism that makes you cringe. Lines like “Hey Sitting Bull, we want to buy some blankets” and jibes about “these are one of the few tribes that think the white man didn’t win the West”.

It goes without saying that the film is painfully cheaply made. Location shooting takes place at the instantly recognisable Bronson Canyon, the close-to-Hollywood locale that has turned up in dozens on films and tv shows, ranging from Robot Monster (1953) to Invasion of the Body Snatchers (1956), episodes of Star Trek (1966-9) and countless B Westerns and serials.

In the interesting trivia stakes, Ray Frank was better known as stand-up comedian Ray Frank Perilli. In the latter years, Perilli scripted a bunch of low-budget films for Charles Band with the likes of Mansion of the Doomed (1976), Cinderella (1977), End of the World (1977), Fairy Tales (1978), Laserblast (1978) and Zoltan … Hound of Dracula (1978), as well as the high profile Alligator (1980)