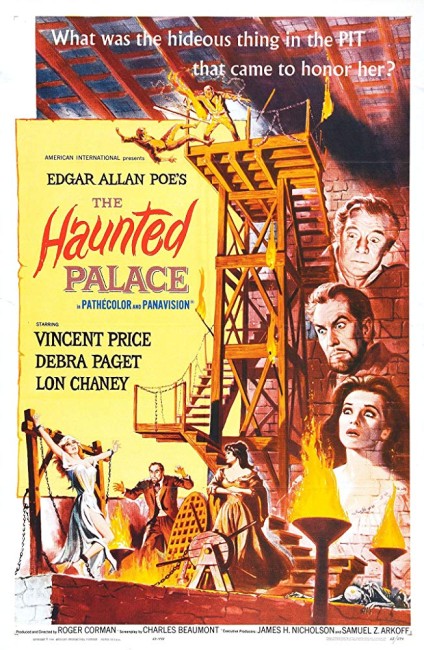 In the small New England town of Arkham, the townspeople discover Joseph Curwen has taken a local girl and is preparing to use her in blasphemous rituals to interbreed humans with the Elder Gods, something that will allow the Gods to have dominion over the Earth again. Curwen is dragged out and burnt at the stake. He dies cursing the locals, saying that he will return to haunt their children’s children. 110 years later and Curwen’s descendant Charles Dexter Ward and his wife Ann arrive in Arkham to inherit the Curwen mansion but are afforded a frosty welcome by the locals. In the mansion, the weak Ward’s mind is taken over by the spirit of Curwen, emanating from a portrait over the mantle. Using Ward, Curwen again sets about his blasphemous mission again, while taking revenge on the descendants of those that burned him.

H.P. Lovecraft is a cult horror writer. Writing between 1922 and his death in 1937, Lovecraft created an extraordinary body of work, centred around cosmic nightmares – of ancient gods waiting beyond the abyss of time to return and wreak havoc, of blasphemous rites, abominable experiments in miscegenation and people driven insane by contact with the elder forces. Roger Corman and his team originally started out making a straight adaptation of H.P. Lovecraft’s novella The Case of Charles Dexter Ward (published posthumously in 1941) but then had the Edgar Allan Poe title forced on them by AIP who were seeking to exploit a connection with Corman’s Poe films.

The Edgar Allan Poe connection is tenuous to say the least – there is no palace in the film, nor any haunting or anything to do Poe’s 1839 mood poem, although Vincent Price gets to quote a couple of lines from it to justify the connection. What the film does trade on is the redolent, oppressive atmosphere of Roger Corman’s Poe films. As it transpires, H.P. Lovecraft and (at least the filmic) Edgar Allan Poe make strangely congruous bedfellows.

The Roger Corman production team are on good form. There is a fine brooding Ronald Stein score. Cinematographer Floyd Crosby and production designer Daniel Haller make particularly good usage of drowned-out colour contrasts – the house in muted browns, the town in greys, being strikingly lit up by the occasional flash of a red gown. The sets that Daniel Haller builds – so that Floyd Crosby can with raw effect crank the camera right up to the ceiling over the sacrificial altar, or pan through the cavernous hallway of the house – are excellent.

There is a classical elegance to Roger Corman’s direction – like the strangely ritualistic scene in the streets where the mutants surround Vincent Price and Debra Paget and move off at the tolling of a bell; or a sadistically nasty scene where Vincent Price douses Elisha Cook in fuel and then coldly tosses a match at him.

Vincent Price overdoes his familiar craven, cringing thing as Ward but the sinister smile as Curwen takes over has a potency. What The Haunted Palace principally lacks though is something to do once it has gotten its warlock back to life, thereafter only circling around cliche warlock’s revenge and sacrificial virgin plots.

Roger Corman’s other Edgar Allan Poe films are:- The House of Usher/The Fall of the House of Usher (1960), Pit and the Pendulum (1961), Premature Burial (1962), Tales of Terror (1962), The Raven (1963), The Masque of the Red Death (1964) and The Tomb of Ligeia (1964). The Case of Charles Dexter Ward was later remade by Dan O’Bannon as the also worthwhile The Resurrected (1992). This film’s production designer Daniel Haller would also go onto direct two further H.P. Lovecraft adaptations in the same style as Roger Corman’s Poe films with Die, Monster, Die/Monster of Terror (1965) and The Dunwich Horror (1969).