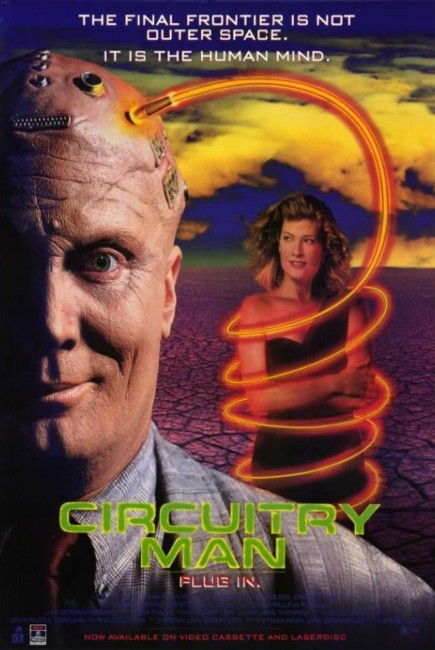 It is 40 years after the oceans have dried up and the last trees fallen. The surface of the Earth has become unbreathable and humanity now lives under the ground. In underground L.A., Lori is a former bodyguard trying to survive as a clothing designer. She is hired by the blackmarketeer Juice to deliver valuable computer seed chips to the psychotic cyber-freak Plughead. Instead, Plughead bursts in and kills Juice. Pursued by Plughead who wants the chips and by cops who want to arrest her for Juice’s murder, Lori flees topside. She sets out to make the rendezvous in New York, accompanied by Banner, a pleasure android that has had a program installed by Juice to make him believe he must search for his non-existent true love.

The modern post-holocaust film was defined by Mad Max 2 (1981). After passing through numerous cheap imitations of Mad Max 2, the sub-genre started to turn out some appealingly quirky variations on the formula – Circuitry Man, Defcon-4 (1985), Cherry 2000 (1987), Hell Comes to Frogtown (1987), and later more upmarket A-budget efforts such as Slipstream (1989), Waterworld (1995) and The Postman (1997) which, their various failings aside, at least tried to do something different with the milieu.

Circuitry Man is an amusing variation. Like Cherry 2000, it loosely rewrites the basic idea of The African Queen (1952) – the odd couple thrown together who fall in love during the course of a journey. Like Cherry 2000, it also has the woman as a tough bodyguard who wears the proverbial pants in the relationship.

The film comes with an eccentrically appealing sense of humour – there is the ever-so-surreal moment when the hero and heroine, upon arriving at a Stop sign in the middle of the surface wasteland, obey it and come to a halt. The characters come with memorable touches – the character of the android who has a program built in that gives it a quest for a non-existent love; the villain who jacks into people’s heads just before he kills them so that he can enjoy their pain.

Dana Wheeler-Nicholson is colourless and never fills the role the way the heroine in a film like this should. Indeed, the film seems to shy away from the action element – a martial arts coordinator is listed on the end credits but one would hardly know it. The most memorable performance in the film comes from Vernon Wells (who was also in Mad Max 2) as the lead villain Plughead. Wells, who physically looks not unlike Laurence Olivier, rises to the occasion, playing with relish. However, Circuitry Man, while amusing, is vaguely unsatisfying by the end. The story and its sense of humour never stretches the distance needed to make for something completely fulfilling.

The Lovy brothers, along with actors Jim Metzler, Vernon Wells and Dennis Christopher, returned with a sequel, Circuitry Man II: Plughead Rewired (1994). Dana Wheeler-Nicholson was the only absentee, where her role instead was inherited by Deborah Shelton.