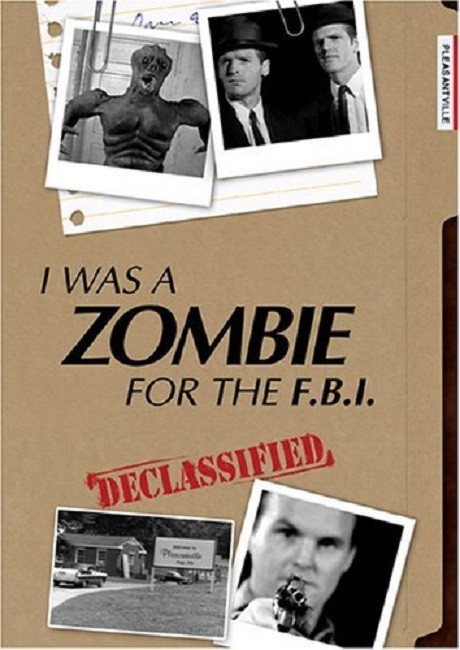 During the 1950s. FBI agents Ace Evans and Rex Armstrong have apprehended the notorious Brazzo Brothers. The brothers are being flown back to be taken into custody when the plane collides with a UFO. The two brothers make an escape and take Ace’s girlfriend, reporter Penny Carson, hostage at the nearby Health Cola factory. Rex and Ace manage to rescue Penny but the brothers get away. The two agents are reassigned to another case after it is found that the Razzos have stolen the only copy of the formula for Uni-Cola and substituted something else. Meanwhile, aliens from the UFO have taken over the factory and are using their ZomBall to turn every person in the area into a mind-controlled zombie.

I Was a Zombie for the FBI was one of those amusing titles I had heard about many years ago and had always looked around in vain for a copy. It was not until 2005 that it received a dvd release. Certainly, nobody involved in the film appears to have ever gone on to do anything else. I assumed that Larry Raspberry and James Rasberry (sic) who play the two lead FBI agents were pseudonyms taken by actors assuming the film would have been an embarrassment but apparently Larry had another career as the lead singer for the rock‘n’roll group The Gentrys.

A few years later and the film would have been perfect for one of the tongue-in-cheek titles regularly churned out by Troma or among the gonzo-titled zombie fad of the 2000s/10s. Marius Penczner has clearly intended the title as a parody of the true-crime thriller I Was a Communist for the FBI (1951). The film becomes a pastiche/parody of the 1950s science-fiction film involving fedora-outfitted G-men going into action to foil an alien invasion. In this regard, you have to admit that Marius Penczner does a fairly good job in getting the look and feel of the 1950s era and its filmmaking. The vehicles, clothes and lighting effects all look authentic to the period. In a nice touch, the film even appropriates serial-type title cards introducing each chapter.

The film is occasionally on the amateurish side, which gets in the way of it being fully as effective as it might be – another better-budgeted mock-up of the era and its’ filmmaking was Alien Trespass (2009). There is a very shabby stop-motion animated alien that briefly appears at the climax. One of the weaker elements is the soundtrack. As I started watching, I kept wondering what the annoying noise run over the dialogue was and assumed it was some type of tape error before realising that it is meant to be the score.

The filmmakers seemed to be making a big effort to create something in a distinct style and this carries the proceedings over the weak spots. The thing that made the film work less effectively for me was the script, which could well have gone through a few more drafts. The plot consists of various elements – alien invaders, FBI, mind-controlled citizenry, the theft of the Uni-Cola formula – but they just feel like juggling balls up in the air that the film remembers to get back to every so often rather than a clearcut menace the heroes are fighting against. It takes nearly half the film before the mind-controlling alien threat becomes apparent, for instance.

The other complaint might be that for all the highly amusing title, it is not one that anybody in the film has any occasion to actually claim as being true – ie. there is nobody that goes undercover or turns into a zombie on behalf of the FBI.