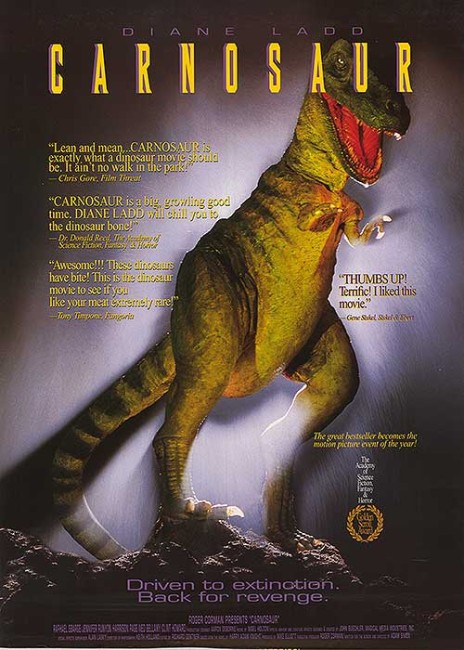 A batch of genetically engineered eggs from the chicken plant in a small Nevada town are shipped out for sale – only to hatch and produce vicious dinosaurs. Doc, an alcoholic night watchman, is dealing with a group of hippie environmentalists from a local commune, when he encounters one of the dinosaurs. He discovers that former biowarfare specialist Dr Jane Tiptree has been working for the chicken plant and has deliberately sent out the eggs, which are now causing women everywhere to become pregnant and give birth to dinosaurs, a scheme that Tiptree has devised to eliminate humankind and allow dinosaurs to inherit the Earth once again.

It is probably uncool for one genre film critic to start taking potshots at another genre critic. That in mind, it is difficult to otherwise talk about the works of John Brosnan. Brosnan wrote several okay books that fall within genre confines – James Bond in the Cinema (1972), Movie Magic: The Story of Special Effects in the Movies (1974), The Horror People (1975) and the fine sf genre study Future Tense (1978). Up until his death in 2005, Brosnan had also been a regular critic and had a running column in the fantastic cinema magazine Starburst from 1977 to the 1990s. Unfortunately, Brosnan’s initially amusing waspish barbs had by the late 1980s fallen to what seemed like a series of incoherent ramblings by a drunk, taking volleys at author James Herbert and Star Trek fans mostly for the hell of it, while also pedantically rambling on about scientific inaccuracies in science-fiction. This culminated in The Primal Screen (1992), Brosnan’s follow-up to Future Tense, which must be singularly the worst genre study this author has ever purchased, lacking any of the academicism of Brosnan’s earlier work and steeped in a scathing cynicism that disconnectedly rambled from one film to the next.

At the same time, Brosnan made a living writing various original science-fiction works and tv novelisations. Under the pseudonym Harry Adam Knight (the spelling of the initials seems are intentional and demonstrate the clear contempt that Brosnan has either of his audience or his own output), Brosnan wrote a number of horror novels and several of these were adapted into films. Though not necessarily any fault of Brosnan’s, these all ended up as cheap ripoffs of other films – this adaptation of Carnosaur (1984) was followed by Beyond Bedlam/Nightscare (1994), which was mounted as a B-budget rip-off of both The Silence of the Lambs (1991) and A Nightmare on Elm Street (1984); and Proteus (1995) for which Brosnan wrote the script, which was a cheap ripoff of The Thing (1982).

Carnosaur has been mounted as a cheap ripoff of Jurassic Park (1993). There is no question about it, no matter how much Roger Corman wanted to grandstand and talk about how Carnosaur the novel had been written before Jurassic Park ever came out. (It was published in 1984 and to Corman’s credit, he did manage to get his film released a month before Jurassic Park hit theatres). Half the film competently drags Jurassic Park down to the level of a B movie with director Adam Simon throwing in a high gore content.

However, the film’s credibility is shot in by the usual ridiculously immobile puppet effects of John Carl Buechler’s Magical Media Industries, which also provided the even worse effects for the other Jurassic Park ripoff the same year, Charles Band’s Prehysteria (1993). This is particularly noticeable when it comes to the climax with Rafael Sbarge facing off against a dinosaur with a bulldozer. If the same sequence had been conducted with Industrial Light and Magic effects, one could imagine it having been a titanic struggle of mythic proportions but Buechler’s effects make it look like a Tonka Toy fighting a dinosaur hand puppet.

What make Carnosaur laughable is its mid-film jumping of tracks into a completely different film where it develops as a plague outbreak film with cliche images of an ominous military clampdown a la The Crazies (1973). What transports it into the realm of the spectacularly tacky is its mad scientist scheme – where Diane Ladd conceives a plot to release genetically-engineered household eggs, which hatch dinosaurs but also impregnate every fertile female and cause them to give birth to dinosaurs, all in order to kill off the human species and allow dinosaurs to repopulate the earth.

When it comes to scenes of the military sitting around discussing the construction of artificial wombs in order to preserve the human species, the film descends into the realms of the ridiculous. Diane Ladd, who was badly slumming it here, has a scene of laughable ignominy, succumbing to her own infection and giving birth in a gory mess, looking on with a mother’s adoring eyes as another ludicrous Buechler puppet emerges from between her legs.

Director Adam Simon began with the fascinatingly weird reality bender Brain Dead/Paranoia (1990) for Roger Corman and went onto the horror documentary The American Nightmare (2000). Simon also wrote the blaxploitation homage Bones (2001) and The Haunting in Connecticut (2009), as well as created/produced the tv series Salem (2014-7) and produced the alien invasion film Captive State (2019).