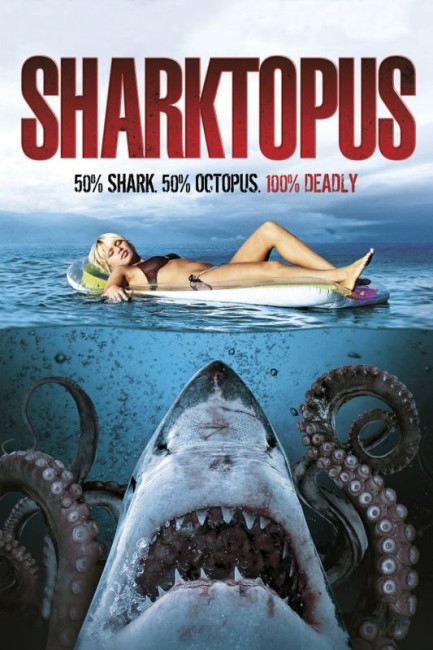 In Santa Monica, geneticist Nathan Sands demonstrates the prototype of the S-11, a genetically-engineered shark-octopus hybrid, to his US Navy backers. A series of neural stimulus devices have been implanted that allow the sharktopus to be controlled for potential weapons use. However, the sharktopus breaks free from its control device during the demonstration and goes rogue. The Navy order Sands to get the S-11 back or else they will withdraw their funding. Sands and his team head to Puerto Vallarta, Mexico in pursuit of the sharktopus. Sands is forced to bring in Andy Flynn, a former mercenary employee that he fired, to hunt the sharktopus. However, the sharktopus proves more tenacious and tougher than any of them anticipated as it slaughters everybody in the water, even emerging to attack up and down the beaches.

The killer shark film was started by Jaws (1975), which produced several sequels and a great many cheap imitators. These steadily continued throughout the 1990s and early 2000s with a number of B-budget video-released films. By about the point of Deep Blue Sea (1999) and most certainly a decade later by the time of the B movies Shark in Venice (2008) and The Asylum’s Mega Shark vs Giant Octopus (2009), the killer shark film came with tongue planted firmly in cheek.

Sharktopus was made not long after Mega Shark vs Giant Octopus. It comes from Roger Corman who has a legendary career as a director and producer of B movies going back to the 1950s. It shows Corman, who has always been a canny exploiter of other people’s trends, jumping aboard and copying the success of The Asylum, a company that have taken his habit for blatantly copying big-budget films and coming up with over-the-top monster movies to even more barefaced extremes than he ever did. Corman has also overseen a number of these other gonzo monster hybrid films with Dinocroc (2004), Supergator (2007), Dinoshark (2010) and Cobragator (2015).

Sharktopus is a film that is ridiculous in conception and delivery – something that has never been regarded as a hindrance in most of the other above-mentioned gonzo shark films. The idea of a hybrid creature that has the head of a shark and a tail that is the tentacles of an octopus looks completely laughable. Do a Google image search on the term ‘sharktopus’ and I defy you not to sit at your computer screen in hysterics at some of the concept art and stills from the film that show up. Some of the scenes in the film – like the image of the sharktopus emerging up onto the beach and walking on its tentacles, or of it perched atop a stone archway reaching down to snatch bystanders and rip their heads off as they watch a dance performance – are guaranteed to have you in hysterics.

Most of the film gives the appearance of having been slung together with little care about the finished product. The plot has a minimal necessary functionality. The sharktopus is brought to life with some very cheap visual effects. Director Declan O’Brien peppers the beach scenes up with a good many filler jiggle shots of bikinied babes. Among the largely unknown cast, Sara Malakul Lane gives the role of the babe scientist’s daughter far more intent seriousness than you would expect. On the other hand, as the young male lead, Kerem Bursin brings solely pretty boy looks – which are frequently displayed with his shirt open – and fails in any way to convince us that he is the seasoned mercenary his character is meant to be.

As in these films, there is the frequent absurdity of some of the lines – like the exchange between the pirate radio dj (Ralph Garman) and his assistant (Shandy Finnessy): “Maybe they’re doing a movie?” “I can see that now – a former Navy SEAL/oceanographer is tracking down this abomination before it takes any other lives.” “I’d watch it.” “Yeah, I know you would Stefanie. That’s because you’re easily amused. I’ve seen you mesmerised watching a frozen burrito rotate in a microwave oven.” Eric Roberts – an actor who has made the B movie his home far too often for his continuing credibility – is asked “You just unleashed an eight-legged man-eating shark on the world,” which he blithely dismisses as “A minor setback.”