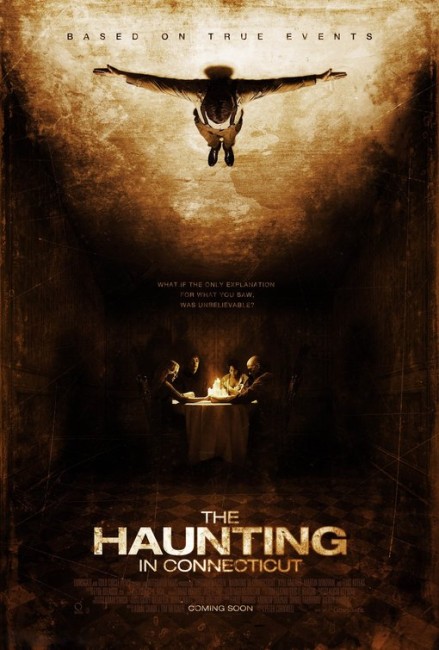 Connecticut, 1987. Sara Campbell’s teenage son Matt has cancer and she is spending much time transporting him to the hospital and back. She and her husband Peter decide the easiest thing would be to buy a second house nearer to the hospital. They find an old house going cheaply and move in. Matt soon experiences ghostly apparitions and visions of a boy his own age from the 1920s. They discover that the house used to be a funeral home. Digging into the background, they learn how owner Ramsey Aickman and his teenage medium Jonah conducted experiments in necromancy using the corpses at the home. Increasingly more threateningly, the ghosts of the dead now intrude into the present due to Matt being able to perceive them because he is near to death.

The Haunting in Connecticut is a ghost story that claims to be based on a true story. The film proudly announces a ‘Based on a True Story’ credit before any of the film itself starts. Like The Amityville Horror (1979), a closer examination of the facts shows there to be little truth to the claims being made.

The real-life story behind The Haunting in Connecticut began with the non-fiction book In a Dark Place: The True Story of a Haunting (1992) by Ray Garton, who had previously written several horror novels and Sabrina the Teenage Witch tie-ins. Garton had been hired to write the book by well-known paranormal researchers Ed and Lorraine Warren later made famous in The Conjuring (2013) and The Conjuring 2 (2016). In the book, married couple Al and Carmen Snedeker claimed that the house they brought was haunted by a demonic presence after discovering that it had been a mortuary.

Ray Garton was later outspoken, claiming that the book he wrote was a fraud. Among other things, Garton stated that he had never been granted the opportunity to see inside the house or even talk to several of the principal figures in the story and that in reality the Snedekers were having serious problems with alcohol and drug addiction. Moreover, the Snedekers were unable to keep their story about what supposedly happened straight. He was told by the Warrens to do the best he could with what they had said and make the rest up and was contractually unable to get out of completing the manuscript.

Neither The Amityville Horror nor its remake The Amityville Horror (2005), or any of the other films in this true-life ghost story mini-genre such as An American Haunting (2005), make a particularly convincing case for depicting a real-life haunting. The same befalls The Haunting in Connecticut, which rapidly falls prey to the well-worn cliches and theatrics of the modern ghost story. The film borrows many of the basics from The Amityville Horror – tedium inducing reality games where people constantly wonder if they imagine apparitions; the son descending into brooding obsessiveness, while the father of the household lapses into drunkenness and becomes abusive. The film also co-opts another cliche from the haunted house genre – where the apparitions are dismissed by those around the principal character because of a history of mental illness (or in this case because of side effects produced by medication).

The Haunting in Connecticut is directed by newcomer Peter Cornwell, his feature-film debut after he had previously made a sole short film, the animated Ward 13 (2003), which plays in the background on a tv screen here at one point. In his big screen debut, Cornwell does nothing to set the world alight, least of all in terms of the ghost story. The film consists of little more than a progression of tired pop-up scares – shadowy figures walking through in the background/foreground; loud bangs on the soundtrack intended to jangle people’s nerves; constant there again, gone again hallucinations with people imagining they are seeing ghostly reflections, pools of blood on the floor, maggots, crawling crabs, rotting meat coming out of the wall of the house and so on.

The Haunting in Connecticut is no more than a slickly produced commercial ghost story, one where the calculatedness of the effects on show wrings any shred of atmosphere out of them. Case in point being the film’s most imaginative moment during the flashback in which Erik Berg manifests a stream of ectoplasm out of his mouth where the potential eeriness of the scene is wrecked by constant flash editing and loud slams on the soundtrack that reduce the power of the image to nothing. This is a film that in its constant and persistent need to keep producing effects for their own sake achieves zero effect whatsoever.

Production company Gold Circle Films conducted a further true-life ghost story, also adapted from an episode of A Haunting, with The Haunting in Connecticut 2: The Ghosts of Georgia (2013).