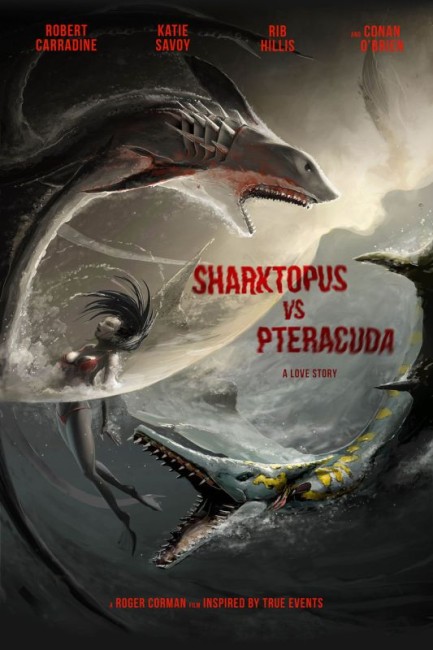 In Santo Domingo, the Dominican Republic, marine biologist Lorena works for her uncle Munoz, an unscrupulous marine world owner. She has caught a baby sharktopus and is trying to train it against its animalistic urges at the same time as he urges her to put it on public display. Back in the USA, the industrialist Rico Symes unveils the pteracuda, a genetically-engineered pterodactyl/barracuda hybrid that has been created for weapons use. However, as soon as the pteracuda is sent on its test flight, the computer system is taken over by an employee in the pay of a foreign government. With the pteracuda running amok and no way to control it, Symes decides to buy the sharktopus from Munoz with the idea of using it to stop the pteracuda. Instead, the two creatures run amok.

Produced by Roger Corman, Sharktopus (2010) was an effort that sought to copy the fad for gonzo shark movies that we have had in the 2010s with the likes of Shark in Venice (2008), Jersey Shore Shark Attack (2012), 2-Headed Shark Attack (2012), Sharknado (2013) et al. Among these, Shaktopus was cheaper and more indifferently slung together than most of the other entries. Following on the trail of Mega Shark vs Giant Octopus (2009) and sequels, this offers up a title bout that pits the sharktopus against another hybrid creature.

Among the gonzo shark films fad, the Sharktopus films count as some of the most miserably cheap. Which is a shame as Roger Corman has on countless occasions proved himself a master at copying other people’s fads and offering up low-budget copies. Here he seems to have miscalculated and turned out two of the sorriest efforts to be found filling this particular niche. Even The Asylum, who make a virtue of their penny-pinching, are turning out far better and more amusing gonzo shark films. Not to mention that they get the balance of tongue-in-cheek absurdity right far better than anything here, which leaves you unsure if it is being serious or not.

Sharktopus vs Pteracuda is a film that fails to establish a conviction on almost every level and frequently just doesn’t seem to be even trying. The effects count as some of the shittiest in the entire gonzo killer shark fad. The script is subpar even for these films. Robert Carradine gets into the past, while Rib Hillis presents a handsome stolidity. On the other hand, there are very broad comic caricatures from Henssy Pichardo and Hector Then.

The one area that does work is the title battles. The effects are completely crap but at least you have to commend Kevin O’Neill, a former visual effects supervisor, of staging the fights well. The one scene (purportedly directed by Corman himself) that gets the spirit of what these shark films should be is where talkshow host Conan O’Brien turns up playing an asshole version of himself, only to get his head bitten off and the severed head then tossed about by a beach volleyball team.

This was subsequently followed by a further sequel Sharktopus vs Whalewolf (2015).

Kevin O’Neill has been a visual effects supervisor usually with Flat Earth Productions. He has directed several other films for Corman’s New Horizons with Dinocroc (2004), Dinoshark (2010), Attack of the 50 Foot Cheerleader (2012) and Dracano (2013), as well as Sharktopus vs Whalewolf.