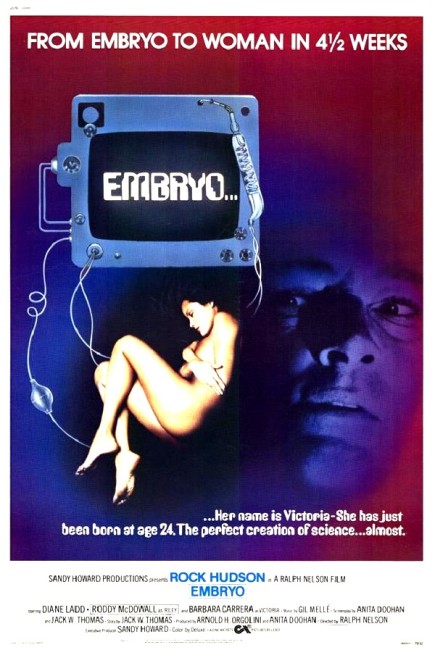 Dr Paul Holliston is successful in saving the embryo from a pregnant dog that he accidentally runs down one night in the rain. He accelerates its growth with an injection of an experimental drug, placental lactogen, until it is fully grown within a matter of days. He next experiments on a female embryo taken from a pregnant teen suicide. He raises the embryo to a fully grown woman within a matter of days and names her Victoria. Victoria learns at a remarkable rate and develops great intelligence. She and Paul become lovers. However, Victoria is also wholly amoral. When the drug begins having side-effects, she starts to kill to preserve herself.

One of the most popular stories of the classic German Expressionist era was Alraune (1911) by Hanns heinz Ewers, which received a number of film adaptations with the Hungarian Alraune (1918); a German version Alraune (1918); Alraune (1928) starring Brigitte Helm; a sound remake of the 1928 film Alraune/Daughter of Evil (1930) also starring Brigitte Helm; and Unnatural (1952) with Hildegard Knef and Erich von Stroheim. It told the story of a woman birthed from the seed of a hanged murderer who, through being born artificially, had no soul and became an seducer, using and luring men to their doom.

Alraune was an interesting prefigural of Germany’s ruthless fascination with eugenics in the following decade. By the 1970s, the debate over soul vs science had died out and the cliche of the mad scientist had been relegated to the realm of Z-budget exploitation. This serves to make Embryo, which rehashes the story of Alraune without any credit, a dinosaur. It is also worth remembering that the film was made in 1976, three years after the US Supreme Court had ruled in favour of Roe vs Wade, and almost certainly this was predicated on exploiting topical fears about abortion.

The film makes an elevated – and quite ponderous – attempt to claim scientific authenticity for itself. The opening scenes are agonisingly po-faced in their seriousness: “The film you are about to see is not all science-fiction. It is based on medical technology that currently exists for fetal growth outside the womb. It could be a possibility tomorrow … or today.”

There is a laughable sense of self-importance to the exercise – the experiment for example is broken up with cuts away to Michelangelo’s David. While the medical scenes appear authentic – there is a medical advisor credited and no obviously howling gaffes – the film is woefully ill-informed when it comes to things like computers, assuming a computer to be a super-brain that can spit out answers to any given question.

The film is a product of its contemporary thematic cross-currents – one the post-2001: A Space Odyssey (1968), post-The Andromeda Strain (1971) school of clinically dehumanising technology, the other a product of the post-Rosemary’s Baby (1968), post-Exorcist (1973) horror film school of malignant pregnancies and evil children. The film steers a wholly melodramatic path to the nearest cliches of both cycles. One can see some of the twists coming miles away – we know exactly where Barbara Carrera is going to turn when it is mentioned she needs the extract of an unborn fetus. Also interesting is the film’s equation of hyper-intelligence and (in a prefigural of the abortion debate) artificial birthing with consciencelessness.

With the exception of the move from a Gothic to a modern medical laboratory, not a great deal has changed since Alraune. Which is sad as director Ralph Nelson had previously made Charly (1968), which was also sceptical about science but told a worthwhile tale of an idiot becoming a genius. The end fadeout where the impossibly old Barbara Carrera suddenly gives birth to a baby is horridly melodramatic.