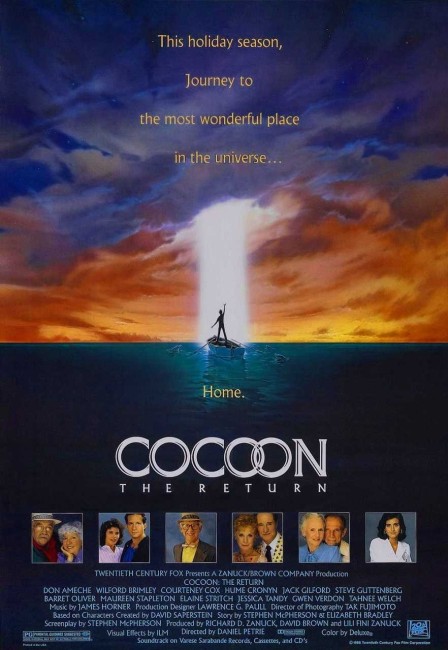 The Antareans return to Earth to rescue the cocoons of their people that were left behind on the ocean floor, which are now endangered by seismic activity. They bring with them the old-age pensioners who use the opportunity to visit their friends and family again. However, before they can get to them, the cocoons are accidentally discovered by oceanographers and the Antareans inside handed over to the military. It is up to the old-age pensioners to hatch a plot to rescue them.

Cocoon (1985) was terribly melodramatic but was well thought of by a number of mainstream critics and proved a reasonable success. Producers David Brown and Richard and Lili Fini Zanuck return to make this sequel, although without director Ron Howard at the helm.

Where Cocoon was merely a schmaltzy, woolly-headed octogenarian take on E.T. – The Extra-Terrestrial (1982), Cocoon: The Return lays on the warm fuzzies and sentiment with a trowel. A worthwhile sequel might have gone to the Antarean homeworld or at the least offered an examination of how the humans have been changed by living on an alien world in their time away. But for all the difference the trip makes, the OAPers might just be returning from a vacation to Europe.

For the senior age set the first film played to, the scenes in this film – outwitting young smartasses on a basketball court, judo tossing belligerent orderlies, jumping over fountains, ogling girls sunbathing – play on a wish-fulfilment fantasy that seems pitched more at people around the age of ten. Other scenes – with the ball of sex energy loose in a restaurant, having septuagenarian Jessica Tandy get pregnant and the dream of the future sequence – are monumentally dreadful in the puerile schmaltziness of their delivery.

The good part about Cocoon: The Return is that the seniors get a better workout of their characters than they did first time around. The wonderfully expressive wrinkles of Hume Cronyn, the animated delights of Don Ameche and simple kindness offered by the great Jessica Tandy are all worthwhile parts of the film. Brian Dennehy gives a great deal of conviction to an awful scene where he starts crying. The film, however, is abject crap – its emotional panderings are the shallowest of any post-Spielberg movie.

Canadian born director Daniel Petrie had a long history working in television, back to the days of live broadcast tv in he 1950s and through classic works like the mini-series Sybil (1976). He gained attention as a director with A Rain in the Sun (1951) and made other works over the years including The Betsy (1978) and Fort Apache The Bronx (1979). His other genre works include:- the werewolf tv movie Moon of the Wolf (1972), the underwater exploration film The Neptune Factor: An Undersea Odyssey (1973) and the miracle healing film Resurrection (1980).