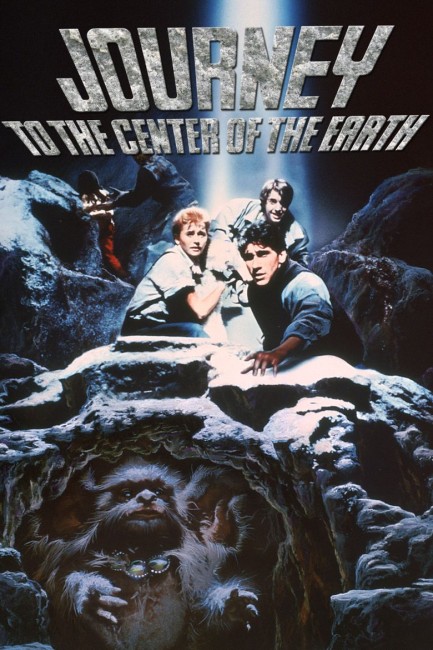 In England, Christina is about to give up nannying after her latest job goes wrong through no fault of her own. Christina’s agency then presses her to take a job in Hawaii for rock star Billy Foul. However, when Christina arrives in Hawaii she finds that the job is only tending Billy’s dog. The dog’s basket is accidentally taken by two brothers, Bryan and Richard, as they head out to visit a cave with their younger sister. Following the dog into the cave, Christina and the two brothers are caught up by a sudden volcanic eruption and plunged deep underground. Searching for a way out, they eventually come upon the city of Atlantis. However, Atlantis is in an uproar over a recent visit from the surface by a Wanda Saknussemm. The Atlantean General Rykov seeks to use Christina and the brothers as part of her plan to invade the surface world.

This version of Journey to the Center of the Earth is a film that had a greatly troubled production history. What one can piece together is that the film originally began shooting in 1986 for Israeli-born, American-based producers Menahem Golan and Yoram Globus. Golan and Globus operated the Cannon Films distribution chain throughout the 1980s and produced a host of Charles Bronson and Chuck Norris action films and cheap sword-and-sorcery copies, among others. The director at that point with Rusty Lemorande, an unknown who had previously worked as a producer on Barbara Streisand’s Yentl (1983), and had written and produced the computer love story Electric Dreams (1984) and the Michael Jackson/Francis Ford Coppola 3D science-fiction short Captain Eo (1986).

For reasons not known, this version of the film ground to a halt part way into production and was left uncompleted. (In some places, the reason for this has been cited as the financial collapse of Golan-Globus, however this cannot be true as the finished film was released by Golan-Globus two years before their demise). About two years after the collapse of the Rusty Lemorande version, Golan-Globus, left with an uncompleted disaster on their hands, hired prolific genre director Albert Pyun to complete the film.

Pyun, who receives no credit on the finished film, wrote a new screenplay and turned Journey to the Center of the Earth into a sequel to his just-completed centre of the earth film Alien from L.A. (1988), shooting it on the same South African sets and with most of the cast from Alien from L.A. as well as several of the cast from Rusty Lemorande’s film. As recounted by both Pyun and Lemorande in the fascinating Cannon Films documentary Electric Boogaloo: The Wild, Untold Story of Cannon Films (2014), Pyun was essentially required to finish the film with zero budget for special effects.

The result is an almost entirely incoherent film that makes no sense whatsoever. Rusty Lemorande, in a statement he posted at the Internet Movie Database, claims that although he is the credited director, only eight minutes of his material was ever used in the finished film, even though he shot much more footage than that. You can make an educated guess as to which material belongs to which director – all the Atlantean material belongs to Albert Pyun as this is shot on the same sets as Alien from L.A.. Almost certainly several scenes that seem offered up at random – shootouts with strange creatures with giant jaws, a romantic scene between Nicola Cowper and Paul Carafotes in a jail cell – were shot by Rusty Lemorande in that they appear haphazardly tacked on and unconnected to anything else in the story. The journey underground is probably Rusty Lemorande’s material as several stills from these scenes were circulating at the time of the shooting of his version. Probably Albert Pyun shot the Hawaiian exteriors in that Hawaii is his native state and he has made several films and later built a studio there. The rest could be anybody’s guess.

The initial intention behind the film appears to have been to make a teen version of the Jules Verne classic Journey to the Center of the Earth (1864) – although in the finished film there is no connection to Jules Verne beyond the title and underground location. (Despite the use of his book title, Verne receives no credit anywhere in the film). Rusty Lemorande had chosen a youth cast, including Nicola Cowper who had just attracted some attention in the British arthouse film Dreamchild (1985) and Ilan Mitchell-Smith who had appeared in John Hughes’s Weird Science (1985). The locations in a series of caverns are occasionally impressive.

All things considered, the attempts to patch the film up end in an entirely incoherent hodgepodge – there often seems no connection between the end of a scene and where characters end up in the next scene. Even among the scenes where it is clearly Albert Pyun that is shooting there is almost no plot – Nicola Cowper is captured but this subplot goes nowhere, while Paul Carafotes who plays one of the brothers drops out of the show and is completely forgotten after he parts from the rest of the group.

Pyun builds the Atlantean scenes up to a revolution about to happen but then abruptly cuts to the revolution being over and several scenes back on the surface with some random stock footage of gun shootouts and car crashes that are unrelated to anything else, before cutting to Ilan Mitchell-Smith and girlfriend Janie du Plessis together in marital bliss, followed by a long series of montages shots from the rest of the film overlaid by a song. One gets the impression that Pyun started filming on leftover sets after making the more coherent Alien from L.A. without a screenplay.

The only other film that Rusty Lemorande has made was the adaptation of Henry James’ The Turn of the Screw (1992) starring Patsy Kensit.