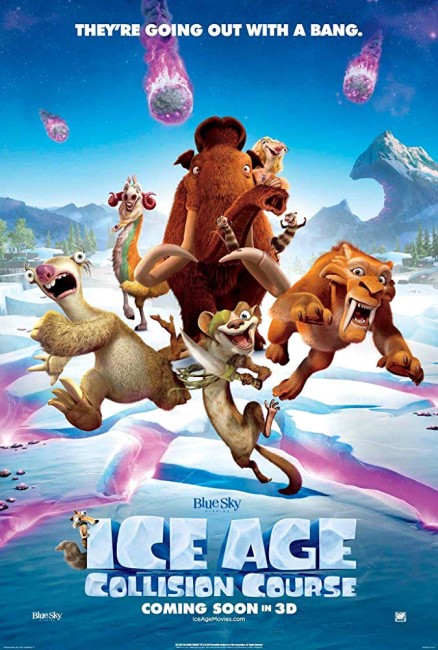 In trying to retrieve his acorn, the squirrel Scrat reactivates a UFO buried in a glacier and runs amok through the Solar System, during which he accidentally knocks an asteroid onto a collision course with the Earth. In their valley, Manny and his wife Ellie feel unhappy with their daughter Peaches’ announcement of her plans to marry Julian and their contemplating leaving the valley. Meanwhile, after being rejected by his latest girlfriend, Sid despairs of ever being able to find a mate. As the asteroid heads towards Earth, the weasel Buck emerges from the underground to show them a pillar with a set of hieroglyphs the predict this. Their discovery of the impact crater where the asteroid lands reveals a series of anti-gravity crystals that could turn back the asteroid’s path.

I hate the Ice Age films. I used to enjoy watching most animated films but the Ice Age films have become a perfect example of the reasons why I pass most of them over now (with some exceptions). They first one, Ice Age (2002), was light and amiable. Most other studios would have ended it there and Ice Age would be largely forgotten today. Instead, producer Blue Sky Studios took heed of the film’s modest box-office success and have relentlessly sequelised it with Ice Age 2 (2006), Ice Age 3: Dawn of the Dinosaurs (2009) and Ice Age: Continental Drift (2012). Indeed, the Ice Age sequels have been the backbone of the studio’s emergence as one of the foremost Hollywood animation houses in recent years.

Blue Sky’s approach has also had a dramatic effect on animation everywhere else. Now all animation studios look to films as franchises where any success is spun out into a series of further adventures of a growing ensemble of characters. It has resulted in a series of homogenous animated films from every studio, no longer based on self-contained stories but around continuing characters. Even given the fact that these are simplistic stories pitched down to children, most of the films are dramatically limited – just how many stories is it possible to spin out based on a series of adventures of talking animals? (The Ice Age series has the additional problem of the fact that there is not even any civilisation around for them to interact with either). Ice Age: Collision Course is a film that has no artistic purpose other than dragging in family audiences who saw the last one. As an interesting story, character arcs that you care about, original jokes, almost anything else, it is a sinkhole of content free entertainment.

As Collision Course opens, it is an Ice Age film as usual. We get more of the rodent Scrat and his attempts to retrieve his acorn. Here however Blue Sky go absolutely nutzoid with it and throw Scrat into a flying saucer and have a series of adventures with him bouncing around the solar system, getting anatomically rearranged in teleport devices, ejected from airlocks and dealing with automatic doors. This throws something wildly fantastical into the Ice Age milieu, not to mention jumps aboard Erich von Daniken’s nutty Ancient Astronauts theories – see Chariots of the Gods (1970). This is also one of the most inane sequences in any Ice Age film with Scrat’s antics in the UFO causing planets to move in very un-scientific ways, to bounce around like pinballs and even for Saturn to ding when it falls into its rings. The previous Ice Age films have had a creative attitude towards science and prehistory but Collision Course throws it up in the air altogether. (More on that in a minute).

Collision Course tries to find something for its increasingly larger ensemble of prehistoric animals and their voice star players to do. Of these, it is only Simon Pegg who rises to the fore with a return of his manic one-eyed weasel from the third film. The film seems reduced to dredging the bottom of the barrel in terms of material when it comes to new story arcs – the mammoths Manny and Ellie are having empty nest syndrome because their now-grown daughter is about to get married and the two are contemplating leaving the herd, or of Diego and Shira debating about whether they should have children and Sid despairing of finding love at all. When it comes down to it, these feel like mundane real-life issues that affect people in their thirties and forties – in other words, one’s that you suspect are relative to the people making the film – but hardly the sort of concerns that you think would appeal to the film’s pre-teen audience.

The absolute worst part of the film though is its blatant ignoring of science and even basic plausibility. This is a film where a bump from a flying saucer that might be a couple of hundred feet in diameter can cause entire planets to be jolted out of its orbit. The plot to save the world from imminent destruction is based on the convenient discovery that shards of rocks from previous impact craters form anti-gravity crystals and then the hatching of a ridiculous plan to block volcanic boreholes with them so that they are blown into space and will divert the path of the asteroid. This has such a patent absurdity to it that it is not even worth nitpicking the science.

What I find distressing is that Neil deGrasse Tyson, a respected science populist and astronomer best known for the recent Cosmos (2014) tv series, who has done a fine job debunking nonsense ideas elsewhere, would lend his name to something where the writers haven’t even considered their audience’s intelligence worth spending five minutes looking some of these details up.