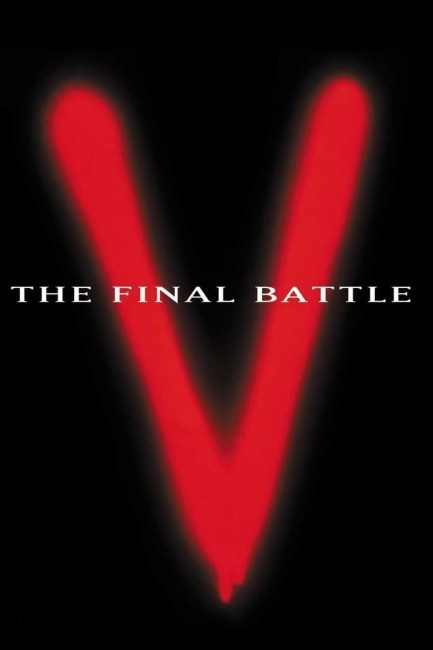 The resistance continues to fight back against The Visitors. They burst into an important Visitor news conference that is being broadcast live and succeed in exposing the Visitors’ true reptilian nature to tv audiences. They follow this up with a raid on a processing station from where The Visitors as pumping Earth water supplies up to their mothership. Robin Maxwell is pregnant with a Visitor child. She gives birth to a perfectly normal seeming girl that ages several years in only a few days, as well as a reptilian creature that soon expires. Examining the dead child, the resistance realise that the Visitors are vulnerable to some Earth bacteria. From this comes the idea of formulating a red dust that becomes the first means of being able to fight back against the Visitors.

The tv mini-series V (1983) was a work that was packaged to exploit the science-fiction boom that came in the aftermath of Star Wars (1977). It proved a considerable ratings success and was followed by this mini-series sequel and a subsequent tv series V (1984-5), which lasted for 19 episodes. Despite its relatively shot length on air, V became one of the major science-fiction fan phenomena of the 1980s.

The original mini-series suffered from ludicrous plotting and just plain bad science-fiction. By the point of The Final Battle, this becomes something that verges on camp. Indeed, it is hard at times not to regard V as a science-fictional version of Dynasty (1981-9). (The presence of Sarah Douglas, later a regular on the primetime soap Falcon Crest (1981-90), as a supporting villainness makes the connection seem even more direct). There are all manner of prize camp scenes like Visitor bad girl Jane Badler lying in bed in her lingerie with one of her men, asking him to show her how he impregnated Robin.

V the mini-series was at least a self-contained drama that had its own story. On the other hand, V: The Final Battle looks like one of those films that used to get cinematically released outside the USA pasted together out of episodes from popular US tv series – see Conquest of the Earth (1981), Spiderman and the Dragon’s Challenge (1981) or the various Man from U.N.C.L.E. films. It even comes with three self-contained dramas – the break-in to the medical centre, the efforts to sabotage the water plant and the rescue of Faye Grant from Visitor custody – exactly like it were a compilation of different stories that had been shot as separate tv episodes. This is given further weight by a look at the credits where the three different parts of the mini-series each have different writing credits.

As V progressed, the basic premise of the series became increasingly more absurd – it is impossible to believe that all the scheming was being done by lizards hiding in human skins, all you see is petty human politics with occasional lizard parts showing. Even the human resistance are divorced from real behaviour – the Visitors who join the resistance seem to have no qualms or doubts about betraying their own species and signing up to a plan that would leave them stranded on an alien planet for the rest of their lives. Marc Singer’s Mike Donovan spends the entire mini-series here trying to get his son back but then when reunited shrugs his son’s brainwashing off without any concern in the space of a single scene.

The plot about Stargirl is really, really bad science-fiction – particularly the ridiculous ending where she saves the day by suddenly manifesting glowing Christmas tree lights. The end of the mini-series – in particular the reference to Red Dust – has been fairly much taken from H.G. Wells’ The War of the Worlds (1898).

Under director Richard T. Heffron, who previously ventured into science-fiction with another equally lame sequel Futureworld (1976), V: The Final Battle is dull and dreary in every regard. Apart from the appearance of a fork-tongued monster and the green-skinned lizard twin at the end of the second episode, there is a singular lack of the moments of schlock appeal – faces ripped off to reveal lizards beneath, mouse-eating scenes – that fired up the original mini-series.

V: The Final Battle certainly has its moments of outright daftness – the wholly unconvincing image of Faye Grant being tortured with lasers in a CO2 mist and dreams of being pursued by a cheesy rubber lizard. It is a perfect example of what one can point to when they mention formula tv – there is nothing in the show that seems to have the vaguest conviction in itself or does not look like a canned piece of drama produced by a machine.

All the principals from the first V mini-series reprise their roles here. Added to the cast this time is Canadian actor Michael Ironside, who gained some fame just prior to this as the psychotic psychic in David Cronenberg’s Scanners (1981). Ironside then went on to join the cast of the subsequent tv series. Certainly, Ironside brings a harshness and deliberately cold presence that is welcome contrast to the bland nice guys the rest of the resistance are.