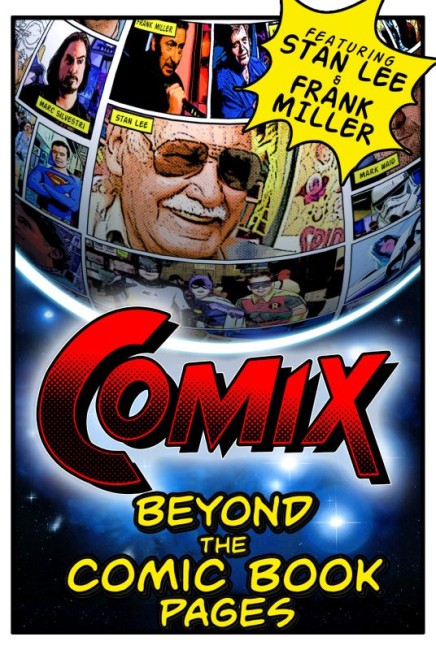 Comix: Beyond the Comic Book Pages is a documentary about the comic-book phenomenon. It was a directorial debut for Michael Valentine.

I sat down to watch Comix: Beyond the Comic Book Pages anticipating a documentary about the history of the comic-book or perhaps an overview of the current state of the industry. I have to say that I ended up being heavily disappointed. What we have seems less like an in-depth documentary that it does a light piece of frippery made for something like the History Channel. It chops and changes subject matter every few minutes and skips over a broad range of topics without doing any of them justice.

It feels like an attempt to explain comic-book history and fandom to someone who has never read a comic-book before. It traces over subject matter that is overly familiar to me (and I am not that much of a comic-book reader) and delivers them in terms of entry level explanations – this is a documentary that even has to explain what cosplay is to us, for instance. It felt like the filmmakers had big ambitions to cover everything but ended up watering them down to such a common denominator that it insults the intelligence of the people who might have been the first ones to want to watch the documentary.

The documentary starts out by giving us an overview of the history of the comic-book. It should be noted that what it is talking about is the history of the American superhero comic-book, not the comic-book overall as the filmmakers seems to assume that comic-books only began with Action Comics #1 (1938) as opposed to the general comic-book, which they do not seem aware began a century earlier. There is no mention whatsoever of comic-books from outside of the USA (apart from odd references to manga in the cosplay sections) and daily syndicated newspaper strips (which were where comics were at for a number of years).

This section skips over the creation of Superman, Batman, mentions the Golden Age, The Silver Age, Frederick Wertham and the arrival of Stan Lee on the scene. It is certainly interesting to see Lee tell the story of the origins of the Fantastic Four and Spider-Man (even if you get the impression that he is telling a story that is well rehearsed from many tellings before). However, for some reason, the documentary seems to leave the history of the comic-book in the 1960s and takes it no further apart from very briefly alighting on the importance of The Dark Knight Returns (1986) and discussing the rise of the independent comic-book later in the show.

Thereafter, the documentary wanders from topic to topic without ever particularly alighting on one. We head from the history of comic-books to discussions on film adaptations – where Frank Miller does give an insightful and interesting analysis of Sin City (2005) – cosplay, inking and coloring, the independent comic-book, fandom and the collectibles market. Essentially, you get the impression that Michael Valentine took his camera and wandered about the San Diego Comic Con and interviewed whomever he came across. He does get talking head time with some big names – Stan Lee, Frank Miller – who tells a captivating story of his first breaks, Neal Adams, Todd McFarlane – but just as many who are unknowns or merely fans.

The film doesn’t even restrict itself to comic-book fandom and veers off into Star Wars and Sailor Moon fandom. This is a documentary that you feel would have helped itself no end by restricting the field of its thesis and exploring that in more depth. The sum of the film amounts to the advice that the various industry professionals give – “don’t give up”, “believe in yourself” etc etc – a series of overly-familiar epithets that have disappeared into cliched meaningless.