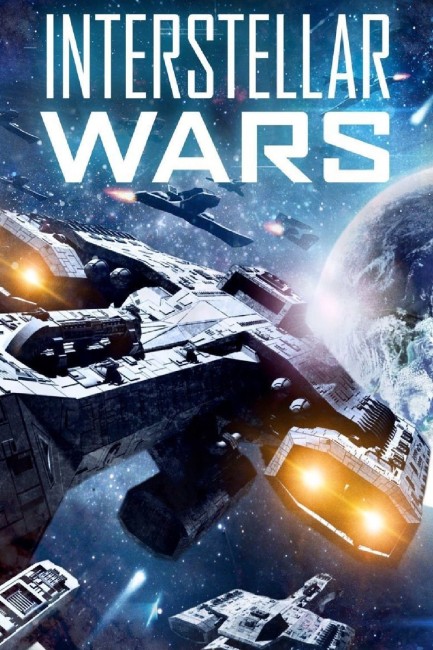 Kelly Kramer is hiking in the desert with her boyfriend, Air Force pilot Kyle Bradford, and her sister Sara, along with Sara’s girlfriend Roxy Evans, when a UFO appears overhead. As they watch, an old man they passed on the trail turns into a zombie and attacks them. UFOs start appearing all over the world, causing people to become zombies. Kelly and Sara’s father is the head of a covert government agency designed to detect menaces from space. General Spears reveals to the agency that the US government has always known about a wormhole portal on the dark side of the Moon. Aliens have been coming through and abducting people for years – the abductees are now being activated as zombies to attack the rest of the populace as part of the invasion plan. As Kyle is called up to fly in the fight against the UFOs, Sara heads to join her father at Arrowhead Lake, while Sara and Roxy struggle through the chaos to get to safety.

Interstellar Wars was the directorial debut of Marlene Mc’Cohen, a British-born actress who has appeared in a number of low-budget genre films over the last few years, including the likes of Alice in Murderland (2010), Aliens Vs. Avatars (2011), Vampire Boys (2011), Lizzie Borden’s Revenge (2013) and Vampire Club 3D (2013). In Interstellar Wars, besides directing, she also plays the sister whose boyfriend is an Air Force pilot. Marlene’s real-life sister Genna also has a leading role in the film as the lesbian girlfriend of Marlene’s character’s sister.

Interstellar Wars is very cheaply made. The headquarters for the military unit coordinating the fight back against the aliens is a single cramped room with two computer consoles, for instance. The actors often giving the impression of being whoever could be coerced into appearing, such as aging Robert Woods who appears dressed in plaid shirt and a ponytail, which seems the complete antithesis of the high-ranking general with the US military he is meant to be.

The alien invasion seems very low-scale – a few shots of UFOs appearing. These come with some decent effects of the Air Force planes taking off and going into action. In that the person(s) responsible for the effects is given no credit on the film, you suspect that these are either library effects purchased for the film or the effects creator pleaded anonymity and didn’t want to be embarrassed by the rest of the film.

There is not much sense of a widespread apocalypse, although the film does attempt to throw zombies into the mix along with its alien invasion – something that has been done in several other films such as Invisible Invaders (1959), Plan 9 from Outer Space (1959) and Undead (2003). The script makes a bizarre attempt to tie the zombies to alien abduction – aliens apparently have been abducting people to implant them with something that will activate them as zombies when the time is right. Unfortunately, this a film where those involved are making an attempt but the skill gap falls well short of the basics in particular in the story field and budget needed to make a film work.

The title should not be confused with Albert Pyun’s Interstellar Civil War (2017). In the US, the film was retitled Independence Wars: Resurgence in an effort to piggyback the release of Independence Day: Resurgence (2016), which came out shortly after.