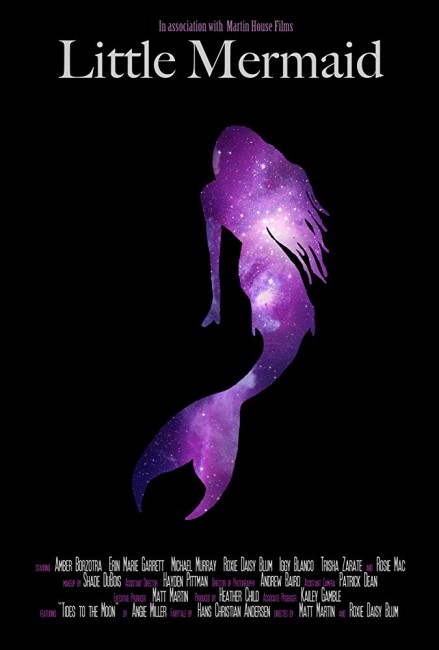 A mermaid conducts a deal with the sea witch to swap her tail for legs so that she can go ashore in search of love. As the price of the deal, the sea witch takes the mermaid’s voice. The mermaid emerges out of the swimming pool at a party held by the playboy Everett. The waitress Amanda comes to her aid and lets the mermaid stay in her apartment. There the mermaid is immediately befriended by the photographer roommate Jax. The mermaid wanders into the strip club where she is thought to be a new dancer and offered a job. On the stage, she proves to be a hit, much to the chagrin of the club’s star dancer Sky. The sea witch comes to visit. Seeing the mermaid’s attraction to Jax, she aids the two of them in getting together at the same time as stealing away Jax’s sight.

Hans Christian Andersen’s The Little Mermaid (1837) is a classic fairytale. The surprise about the popularity of the story is how little it has attracted in the way of film attention. Everyone remembers the popular Disney animated film The Little Mermaid (1989). Beyond that, there have been one or two other foreign-language adaptations – a Japanese animated version from 1975, a live-action Danish version from 1976 and a Russian live-action one from the same year – but these are not well known. That said, the late 2010s offer a plethora of adaptations. This was the first up and was followed by another independent live-action version The Little Mermaid (2018) starring Poppy Drayton, a live tv broadcast adapted from the Disney film and an announced live-action theatrical remake of the Disney film slated for release in 2020.

Little Mermaid is a contemporary retelling of the fairytale. At which one has to comment that it is a decided oddity. The fairytale is filled with witches, Prince Charmings and devil’s deals for love. On the other hand, when it comes to this film, what we have is a hipster romance filmed with the soft-focus gauziness of a feminine hygiene products commercial. There are many of the familiar elements of the Andersen fairytale present in the film – the mermaid’s quest for love, the loss of her voice as price for her gaining legs, the witch waiting to claim her back – it is just that where the film places its focus is odd to say the least.

The film certainly brings out many element of the fairytale that were excised by the Disney version – particularly creating an equivalent of the climax of the story where the prince ends up marrying another and the mermaid attempts to kill him with a knife, followed by her tragic sacrifice and transformation into a spirit of the air. What we don’t get is the opening scenes where the mermaid decides to save the prince after he falls into the sea. Here all that happens is just a generalised decision on her part to emerge onto land in search of love because – there is not even any depiction of her striking the deal with the sea witch.

Perhaps the loopiest aspect is where the film riffs on the sections of the fairytale where the prince becomes entranced by having the mermaid dance for him. Here this is spun out to have the mermaid become a stripper whereupon the film spends a good two-thirds of its running time centred around a burlesque show (where the filmmakers seem under the impression that the strippers in strip clubs are burlesque performers) and the rivalries and politics that go on there. Oddly, this makes Little Mermaid one of two films that came out about the same time showing mermaids becoming sensations in strip clubs along with the realllllly strange Polish film The Lure (2015).

The other oddity about the film is the bizarreness of some of the ways that people behave, which can often be said not to resemble anything within the realms of human psychology. Not too far into the film, the mermaid turns up at a cafe with a guy (Michael Murray) where the waitress (Trish Zarate) spots her after he goes to the restroom, suddenly becomes concerned, gives the mermaid all her tip money and then invites her to come and stay at her apartment. Now the idea that a waitress would willingly give all her tip money to a complete stranger she has only known for five minutes (and who gives the impression she is somebody else’s date) exists in the realm of completely fantasy. Not to mention it is a scene that is clearly being written and played by people who have never had to make ends meet on minimum wage and/or tips. This is the followed by the bizarreness of the waitress suddenly deciding to allow this complete stranger who has not even spoken to her the free reign of her apartment, handing her the keys and saying “I’m not here that often.”

Not long after, there is the scene where the mermaid wanders into the strip club and is taken to be a prospective new dancer whereupon she is given a budget and taken off to be outfitted for a costume all without ever being given an audition as to whether she can actually dance. Elsewhere we have the novelty of a drug dealer who asks a bummed-out Erin Marie Garrett “Are you really sure?” when she goes to buy some drugs from him, as though any real world drug dealer would question whether someone really wants their product as opposed to saying “give us your money” as quickly as possible.

The oddity of Little Mermaid is some of the casting. Most low-budget films feel stretched to try and find some (sometimes any) name of recognition to carry the film. This seems especially laughable here where the film seems to be really reaching in terms of the names it has been able to bring on board. These include Rosie Mac, in the role of the mermaid, an English actress whose only appearance on screens before was as body double for Emilia Clarke on tv’s Game of Thrones (2011-9); Amber Bozotra, who plays the sea witch, whose sole claim to fame was being a contestant on Big Brother (2000– ); and Erin Marie Garrett, a former woman football player and stuntwoman, as the club’s rival dancer.

Little Mermaid is a co-directorial debut for Roxie Daisy Blum and Matt Martin. Both can be spotted in front of the camera – Martin plays the photographer who becomes the object of the mermaid’s affections, while Blum is the plus-sized owner of the strip joint.