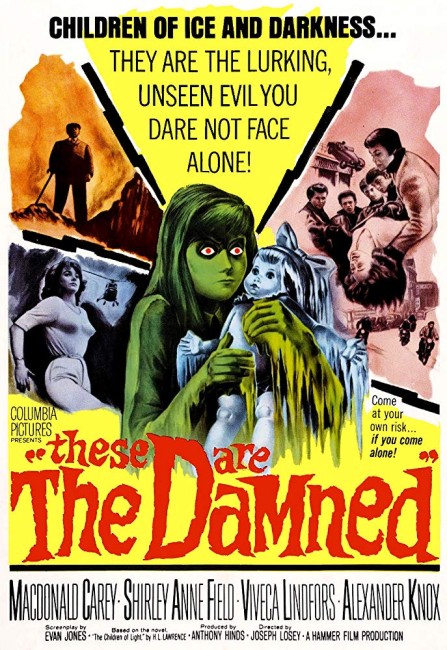 aka These Are the Damned

In a small English seaside resort town, King, leader of a gang of teddy boys, uses his sister Joan to woo men that he and his gang then rob. Their latest victim is American tourist Simon Wells. Afterwards, Joan meets Wells and, feeling regretful over what happened earlier, jumps aboard his boat, choosing to go with him rather than King. King swears to kill Wells. Fleeing from King, the two run onto the Edgecliff military establishment and fall over a cliff. They are found by a group of children who are kept imprisoned by the military in a series of rooms at the bottom of the cliff and who have never seen other human beings. Thinking Joan and Simon are their parents, the children take them into their midst and hide them from the monitoring cameras. What the adults do not know is that the children are mutants capable of surviving in a radioactive environment and that they spread radiation with their very touch.

The Damned was one of the early films from Hammer, better known as the production company that produced the Christopher Lee-Peter Cushing Frankenstein and Dracula films. It was also one of the films made by Joseph Losey, later the director of celebrated efforts such as The Servant (1963), The Go-Between (1971) and The Romantic Englishwoman (1975). Losey has also made a handful of genre films, including the children’s fable The Boy with Green Hair (1948), the remake of M (1951) and the misfired adaptation of the comic-strip Modesty Blaise (1966). What dogged Losey during this period was his investigation as a suspected Comunist by HUAC during the McCarthyist era. He fled from this to England and worked there for several years. Hammer originally employed him to make X the Unknown (1956) but he was replaced at the refusal of the lead actor to work with a Communist.

Hammer had great success with their horror films during the late 1950s through to the mid 1970s. The Damned is in many ways acharacteristic of their product. It is more reminiscent of the science-fiction films that they were making in the early 1950s before they became a name, it in particular resembling The Quatermass Xperiment/The Creeping Unknown (1955) and Quatermass 2/The Enemy from Space (1957). Following their breakthroughs successes with The Curse of Frankenstein (1957) and Dracula/The Horror of Dracula (1958), Hammer for the larger part abandoned science-fiction and concentrated on horror. The Damned was also made in black-and-white when Hammer had, with the exception of a handful of psycho-thrillers in the 1960s, abandoned black-and-white altogether beginning with The Curse of Frankenstein.

In fact, you could say that The Damned is more of a Joseph Losey film than it is a Hammer film. Hammer films were florid, were set in the unreal world of Victorian drawing rooms and European castles with upper-class types to root for, whereas The Damned is made in the black-and-white kitchen sink realism that was the in-style of British cinema at the time and features central characters with working-class accents. Moreover, The Damned is a realistic character-driven drama much more than any other Hammer film – Losey takes nearly half the film to get to the children’s lair, during which time the film concerns itself with the romance between MacDonald Carey and Shirley Anne Field and their flight from her possessive brother Oliver Reed and his gang of Teddy Boys, a character-driven focus that was almost unheard of in a Hammer film.

It is possible that The Damned was made to capitalise on the success of the previous year’s Village of the Damned (1960) – considering the similar use of the word ‘damned’ in the title and the similar theme of deadly, evolutionarily advanced children. The discovery of the children and the gradual unveiling of their fatal condition comes with some cold chill. What is interesting is that Joseph Losey does not portray the children as evil as Village of the Damned did. In fact, the film is neutral and noncommittal about whether their mutation is a good thing – on one side, you can see that in light of the film’s warnings about imminent nuclear holocaust that their condition may be hopeful for the human race. Rather, Losey sees the real villain as a cold bureaucracy determined to exploit them and its almost fascistic wieldings of the machinery of power.

You get the impression that Joseph Losey is not well versed or even interested in the science-fiction aspect. There is only a single moment where see anything remotely fantastique actually occur – where one of the children uses their powers to open a lock. Losey also makes mistakes like the assumption that radioactivity would make the children cold to touch. (Genre critic John Brosnan leaps onto this aspect to write The Damned off in his genre study Future Tense (1978), claiming that radiation instead heats objects up, although he is wrong – it requires high quantities of radiation to heat an object up. Any heat in a radioactive object would be latent heat generated by a presumed nuclear explosion itself, not the radiation. The amount of heat needed to heat an object noticeably would kill a person off with cell damage well before their skin became warm. Both uranium and plutonium are cold to the touch, for instance, and the children would only be at room temperature).

However, this lack of familiarity or interest in the science-fiction actually benefits The Damned – it is something that makes the film into a human drama rather than a B movie about radioactive kids. Another director out of 1950s B science-fiction cinema might have played it all up as melodrama, showing the children glowing, displaying various superpowers and attempting to take over the world. Losey is interested in none of that – instead we get a haunting portrait of isolated children longingly regarding the strangers as their parents, the saddening image of them discovering flowers and being rounded up by soldiers after one brief moment in the sunlight and the particularly haunting image of the boy begging for a ride in Oliver Reed’s car even though Reed insists that he will be killed by it. The final images of the helicopters blocking Oliver Reed’s car on the road and trailing the boat as MacDonald Carey and Shirley Anne Field head out to sea to try to make it to France have a chill bleakness. [Joseph Losey later echoed these images of people being pursued by helicopters in Figures in a Landscape (1971)].

The film is filled with strong, dramatically composed shots. Losey loves wide-angles – pulling back to supreme wide-angle to show shots of the motorcycles racing through the town or cliffside shots of the bare coastline and looking down from the helicopters on the boats at sea. Losey uses landscape as external expression of the film’s political bleakness. Even Viveca Lindfors’ contorted cliffside statues are made to seem like blasted mutated human and animal figurines that are outwardly expressing an inner torment.

The Damned experienced a number of problems in distribution. In the US, its release was held up until 1963 and then the film retitled These Are the Damned with Joseph Losey’s original 96-minute print being cut down to an 87-minute running time.