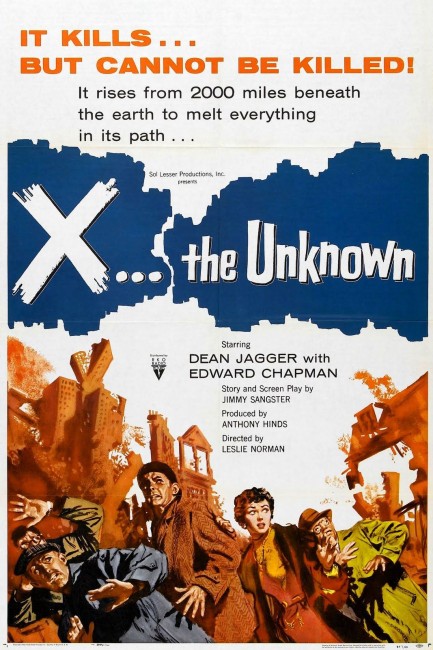 Soldiers are conducting training operations in the handling of radioactive materials at a quarry in Lochsmouth, Scotland, when they encounter unusually high radiation readings. A fissure opens in the ground and soldiers nearby are left badly burned. Dr Adam Royston, a scientist at the nearby atomic research facility, is called in to determine what is happening. Soon people around the area are being attacked by something and left burned, even melted to the skeleton. Something bursts in to Royston’s laboratory and the hospital x-ray department to steal the radioactive materials, even tearing apart shielded containers. Royston realises that the military exercise has awoken something inside the earth’s crust that feeds on radiation and has now emerged as a blob that is constantly growing in its search of sustenance.

X the Unknown was a spinoff from the Quatermass series. Nigel Kneale had had great success on BBC tv with the six-part serial The Quatermass Experiment (1953), which was followed by Quatermass II (1955) and subsequent to this Quatermass and the Pit (1958-9). The first serial was adapted to the screen by Hammer Films as The Quatermass Xperiment (1955), shorn of the letter E in the last word to make a virtue of the fact the film was slapped with an X rating in the UK. X the Unknown started as a sequel to this but Nigel Kneale refused the use of his characters in any work he had not written and so Quatermass was written out and replaced with Dean Jagger’s Adam Royston. Hammer subsequently proceeded to adapt Kneale’s other serials as Quatermass 2/The Enemy from Space (1957) and Quatermass and the Pit (1967).

X the Unknown was the very first script for regular Hammer screenwriter and occasional director Jimmy Sangster. Sangster had previously been working with the studio as an assistant director and production manager but turned his hand to writing here. The following year he wrote The Curse of Frankenstein (1957) and followed this with Dracula/The Horror of Dracula (1958), the two films that became the foundation stones of Hammer’s success as studio and the start of their association with horror over the next two decades. (See below for Jimmy Sangster’s other films).

The director originally chosen was Joseph Losey, known for films like The Servant (1963), Modesty Blaise (1966) and The Go-Between (1971). Losey was an American but came under the scrutiny of House Un-American Activities Committee and was listed as one of the 151 suspect members of the entertainment industry because he was a member of the Communist party and had been active on many issues. This led to his being blacklisted in Hollywood and unable to get any work. He was however able to successfully reinvigorate his career after moving to England in 1953. On X the Unknown however, lead actor Dean Jagger, a Mormon, refused to work with a Communist sympathiser and forced Losey’s replacement a week into shooting.

The new director was Leslie Norman, then known as an editor and with two films as director – the crime drama Too Dangerous to Live (1939) and the fine clairvoyance film The Night My Number Came Up (1955). Despite the sterling work he delivers here, Norman was reputedly difficult to work with. He was hired again by Hammer a few years later for The Lost Continent (1968) but ended up being fired soon into shooting. Norman made a handful of other films, most notably the Australian drama The Shiralee (1957) and Dunkirk (1958), before slipping into television, directing episodes of classic shows such as The Avengers (1962-9), The Saint (1962-9), Randall and Hopkirk (Deceased) (1969-71) and The Persuaders (1971-2). Joseph Losey did later return to work for Hammer and made one of their finest science-fiction films The Damned/These Are the Damned (1961).

For all that he was a headache for Hammer, Leslie Norman turns in a well worthwhile film that comes with a stark black-and-white urgency. The monster is kept unseen for nearly the first hour of the film’s 81 minute running time. When seen, what we have is the same sort of amorphous oozing mass that was popularised in the US a couple of years later with The Blob (1958). In fact, I would argue that X the Unknown does the same thing far better than The Blob did. The Blob tends to be remembered with a certain cheesiness value, whereas there is nothing schlocky or amusing about X the Unknown – Leslie Norman’s stark, sober direction defies you not to take the show seriously.

There are some fine effects as we see the blob oozing up and over the wall at the lab, across the landscape destroying power pylons in its wake, and through the streets of the village. There is a particularly hair-raising scene as a young girl wanders away as people are being herded to safety in the church and unwittingly walks into the path of the blob as it oozes through a stone wall across the street. The effectiveness of these scenes is only let down by some slightly dodgy model effects. There are however some wonderfully gruesome effects where we see people’s faces being melted (clearly Hammer determined to pander to the film’s X-certificate).

Jimmy Sangster cannily turns the blob in the film also into an atomic monster, jumping aboard the fad for atomic monsters that had begun a couple of years earlier with The Beast from 20,000 Fathoms (1953) – just like The Beast, the X returns to life following a series of atomic tests. Some of the science in the film takes you back today – Dean Jagger handles radioactive materials in his lab, removing them from a lead canister using a mechanical arm, which is fine. However, all that shields him from the hard radiation is a small free-standing window that he simply moves around after the canister is closed, seemingly oblivious to the fact that all of the walls around the laboratory and the window would be suffused by hot radioactive particles. One supposes you cannot be too hard on the film as nobody much knew the real effects of radiation – the US was still conducting aboveground nuclear tests and having US serviceman scrape up radioactive waste with shovels in this same era.

Dean Jagger gives a fine performance, radiating the sort of authoritative intelligence that you associate with a Quatermass. In fact, he makes a far better Quatermass than the bullish Brian Donlevy did in Hammer’s first two Quatermass films. Amid the other interesting cast names, you can also see a very young Fraser Hines, later the longest running companion on the original Doctor Who (1963-89), as the friend of the kid who gets attacked.