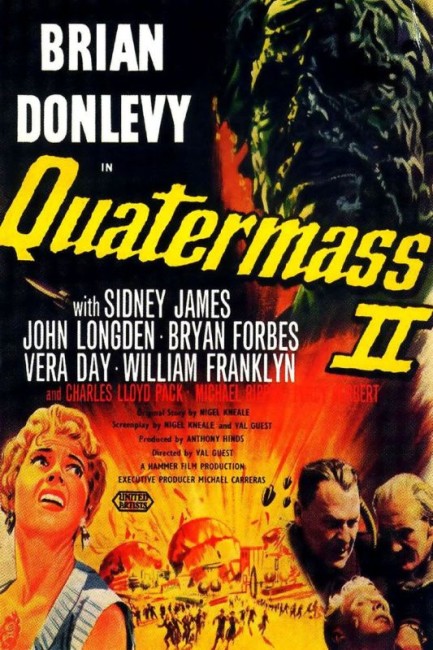 aka The Enemy from Space

Professor Bernard Quatermass and his assistants track via radar a series of mysterious objects coming from space. Quatermass follows the path of the objects to where they have come down in the Winnerden Flats area and finds a series of micro-meteorites that appear to be designed in shape. There Quatermass also discovers a top secret government project that has appropriated his designs for a moonbase. When his assistant Marsh picks up one of the unopened meteorites, it cracks open and releases a gas. Armed guards from the facility arrive and whisk Marsh away. Outraged, Quatermass determines to find out what is happening and demands answers from the authorities. Managing to get into the Winnerden Flats facility with an MP, he comes to realise that the meteorites contain an alien lifeform. They are part of an alien beachhead and are possessing human bodies in order to construct a habitat that will create an atmosphere for them to flourish on Earth.

Quatermass 2 was the second of the Quatermass films. Quatermass originated on television with three live-broadcast serials, The Quatermass Experiment (1953), Quatermass II (1955) and Quatermass and the Pit (1958-9), from writer Nigel Kneale. The rights to these were snapped up by Hammer Films, who at that point had not had the success with the horror movies that became their trademark – something that started only three months after Quatermass 2 came out with The Curse of Frankenstein (1957). Hammer made a film version The Quatermass Xperiment (1955), known as The Creeping Unknown in the US, starring Brian Donlevy and then followed it with Quatermass 2 here, known as The Enemy from Space in the US. The studio’s output became dominated by horror films for the next few years and it would be a decade before they returned to make the film version of the last Quatermass serial with Quatermass and the Pit/Five Million Years to Earth (1967). Without Hammer’s involvement, there was also a fourth entry made for tv and cinema release with Quatermass/The Quatermass Conclusion (1979), plus a remake of the first serial as the live-broadcast tv movie The Quatermass Experiment (2005).

Hammer’s trilogy of Quatermass films has a legendary reputation. For reasons I am not quite sure, Quatermass 2 is the least available of these, not having enjoyed much of a life in video/dvd release or being available in tv re-runs. This has perhaps amplified its stature as a classic. Critics like David Pirie in A Heritage of Horror: The English Gothic Cinema 1946 – 1972 (1973) and the authors of The Aurum/Overlook Encyclopaedia of Science Fiction (1984) extol Quatermass 2 as the best of the series, citing its paranoid aspect and its critique of the British government of the day. Finally seeing the film, it seems somewhat the lesser of what its reputation holds.

Where The Quatermass Xperiment was the first in a series of films about infected astronauts returning from space – see other works like First Man Into Space (1959), The Hideous Sun Demon (1959) and The Incredible Melting Man (1977) – Quatermass 2 falls into the spate of paranoid alien body snatchers films that were all the rage in the US around this time with efforts such as Invaders from Mars (1953), It Came from Outer Space (1953) and Invasion of the Body Snatchers (1956). (Of course, the real flowering of ideas in the Quatermass series of course came with Quatermass and the Pit and its conceptually wild speculations about Martians, human origins, psychic powers, race memory, hauntings and The Devil).

Certainly, the scenes here with Quatermass coming up against the sinister security forces at the plant and discovering a conspiracy among Whitehall politicos holds a paranoid sense of a powerful, far-reaching conspiracy. It is something that almost looks forward to what the superb tv mini-series Edge of Darkness (1985) plumbed in its digging into the sinister relationship between the British government and government contracts/private enterprise.

1950s British science-fiction often held a paranoid view of the government, seeing that its power had become totalitarian – see works like Hammer’s subsequent The Damned (1963) and the classic work of this era, George Orwell’s Nineteen Eighty-Four (1949), which Nigel Kneale notedly adapted to tv with Nineteen Eighty-Four (1954). Here, the background of the village is surrounded by ominous slogans – “Talk About the Job – Lose It,” “Remember – Secrets Mean Sealed Lips” – something almost directly taken from Nineteen Eighty-Four.

I am not fully sure what Nigel Kneale’s underlying fear is here – the sinister power of government bureaucracy or of new industries like nuclear power gaining an ominous foothold into the British public – but the film certainly looms with an apprehension about its power and implacability. The industrial landscapes look wonderfully imposing – particularly the shots of the vast metal dome of the plant rising up dwarfing human characters as they walk towards it. Val Guest shoots much of the action with characters constricted and surrounded by masses of piping and industrial machinery.

On the other hand, Quatermass 2 is much more of a prosaic film than The Quatermass Xperiment. The scenes with the alien conspiracy are muted and by no means played for the paranoid atmosphere they are in American body snatchers films like It Came from Outer Space, Invaders from Mars and Invasion of the Body Snatchers, or even a subsequent British entry in the genre like Village of the Damned (1960). A couple of scenes showing politicians and Quatermass’s abducted associate (of which far too little is made) taken over do not make up for it. There is not the sense of dehumanisation, of the familiar being abruptly alienated that we get in these other films. There is far more effect given over to the guards and sinister industrial landscape.

Moreover, Quatermass 2 lacks the horror effects of The Quatermass Xpriment – of Richard Wordsworth absorbing cactuses into his arm and mutating – the film is more about the prosaic stuff of Quatermass arguing with officials and trying to sneak into plants. The sole exception might be the scene where Tom Chatto’s politician stumbles down the external stairs of the dome steaming and covered in gunk, before collapsing dead. An equivalent scene where a woman in the town hall picks up a newly fallen meteorite and becomes infected is played for little in the way of atmosphere, despite being given a certain edge by Brian Donlevy’s urgent warnings not to touch things. There is a reasonably interesting giant alien mass that emerges at the end, a la the climax of the first film, before Quatermass conveniently manages to fire his rocket down onto it.

One of the aspects I dislike about the first two Quatermass films was the importation of American star Brian Donlevy in the role of Quatermass. Where he should demonstrate intellectual power and wisdom, Donlevy gives an angry bullish performance, constantly barking orders at subordinates. In the opening scenes here, he is chewing out and threatening to fire his associates for diverting resources without even first doing something like attempting to see what they are doing. To the character’s favour, he at least calms down after that point and the role becomes somewhat more like what a Quatermass should be.

Outside of Quatermass, Nigel Kneale’s other tv works are:– 1984 (1954), a live adaptation of the George Orwell novel; The Creature (1955) about the search for The Yeti; The Road (1963) about a haunting that may be an example of time travel; The Year of the Sex Olympics (1970) about a future dulled into compliance by televised sexual competitions; Wine of India (1970) about future euthanasia; The Stone Tape (1972) about a scientific investigation into a haunting; the six-episode tv anthology series Beasts (1976), which all featured unseen monsters; the seven-episode comedy series Kinvig (1981) about an SF fans who has an encounter with aliens; and the ghost story tv movie The Woman in Black (1989). Kneale’s film scripts were The Abominable Snowman (1957) adapted from The Creature, the adaptation of H.G. Wells’s The First Men in the Moon (1964), the occult film The Witches/The Devil’s Own (1966) and uncredited work on Halloween III: Season of the Witch (1982).

Val Guest’s other genre films include:– the comedy Mr Drake’s Duck (1951) about a duck that lays radioactive eggs; Hammer’s Nigel Kneale adaptations The Quatermass Xperiment (1955) and The Abominable Snowman (1957); The Full Treatment (1960) about a racing driver suffering psychopathic impulses; Life is a Circus (1960), a comedy involving a genie; the end of the world film The Day the Earth Caught Fire (1961); some scenes of Casino Royale (1967); the sf pop music film Toomorrow (1970); and the prehistoric drama When Dinosaurs Ruled the Earth (1970).