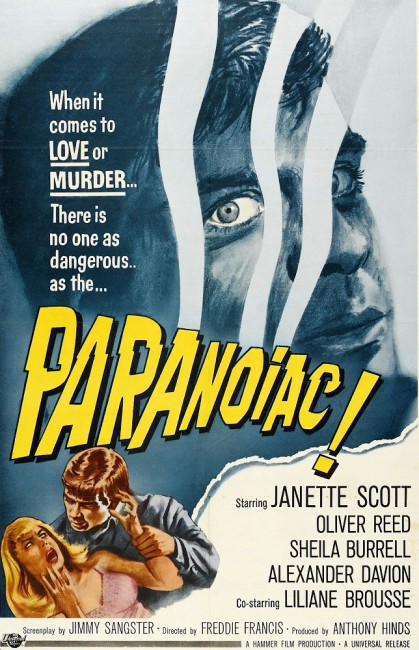 Brother and sister Eleanor and Simon Ashby live at the High Tor estate they inherited from their parents who died several years before. The other brother Tony also died, throwing himself from the cliffs in an apparent suicide, although the body has never been found. The caddish Simon spends all his time drinking and running up debts, while Eleanor appears to be going mad. Eleanor throws herself over the cliff but the missing Tony suddenly reappears and dives in to save her. Eleanor is overjoyed at Tony’s apparent return, while others in the family circle are certain that he is an impostor. As these questions play out, family secrets start to be uncovered.

Paranoiac was the second in a series of psycho-thrillers made during the 1960s by Hammer Films. At the time, Hammer were best known at the time for their series of Frankenstein and Dracula films with Christopher Lee and Peter Cushing and other assorted horror films. The 1960s began with the huge success of Alfred Hitchcock’s Psycho (1960) and Hammer became one of a host of filmmakers in both the US and UK who rushed to compete with their own copies. In the field of the Psycho-Thriller, Hammer made the likes of A Taste of Fear/Scream of Fear (1961), Maniac (1963), Nightmare (1964), Hysteria (1964), The Fanatic/Die, Die, My Darling (1965), The Nanny (1965), Crescendo (1970) and Fear in the Night (1972). Almost all of these were written by Jimmy Sangster.

Freddie Francis (1917-2007) came from a background as a cinematographer, shooting films such as The Innocents (1961) and even winning an Academy Award for Sons and Lovers (1960), before becoming a director. I have watched most of the films he made as director and am certain that these Hammer psycho-thrillers, Paranoiac, Nightmare and Hysteria, plus the ones he made for other companies such as The Psychopath (1966), are some of his best works. (See below for Freddie Francis’s other films as director).

Freddie Francis was one of the most visually stunning genre directors of the Anglo-Horror Cycle. Here his positioning of people inside the Cinemascope frame, the arrangements between fore- and background are astonishing – there is the striking effect of the scene where various parties interrogate the returned Alexander Davion, which comes with multiple people standing at different points of focus within a single shot. Or the way light comes through bevelled windows as Janette Scott stands in front of them, or of figures outlined behind dirty, smeared windows or frosted glass. In one extraordinary shot, we see Janette Scott at the bottom of a cliff in the foreground and the figure (of what we will later understand is her missing brother) as a tiny thumbnail-sized person on the top of cliff in the background behind her.

Jimmy Sangster’s plot is not tooooo implausible as might be said for some of the other plots he contributed to Hammer’s psycho-thrillers, which ended up being absurdly contrived in their end explanations. The revelation of the person in the mask comes as a modestly effective shock. The main problem with Paranoiac is that it is not much of a horror film. It was a sold as such because both the psycho-thriller genre and the Hammer brand were hot at the time.

On the other hand, what we have is for the most part more of a mundane thriller about an impostor and the uncovery of family secrets than a psycho-thriller. We do get the image of a figure in a hideous mask mainly it would seem to categorise it as a horror film. Were it not for that and the climax with a mad Oliver Reed playing his organ to a skeleton as the house burns down around him, it would be a hard stretch to make the case for Paranoiac being a genre film.

The cast is made up of an assortment of Hammer regulars and faces who were barely heard from again. The most well-known name amongst these was Oliver Reed who had a career as a leading man in various Hammer Films such as The Curse of the Werewolf (1961) and The Damned (1963) and several of their historical films Night Creatures/Captain Clegg (1962), The Pirates of Blood River (1962), The Scarlet Blade (1963) and The Brigand of Kandahar (1965) around this period before his international breakout success with Oliver! (1968) and various Ken Russell films. Here Oliver Reed is at his bad boy best, cast as a drunk in what must have been an uncanny prefigural of the reputation that Reed gained as an alcoholic and a hellraiser in later years.