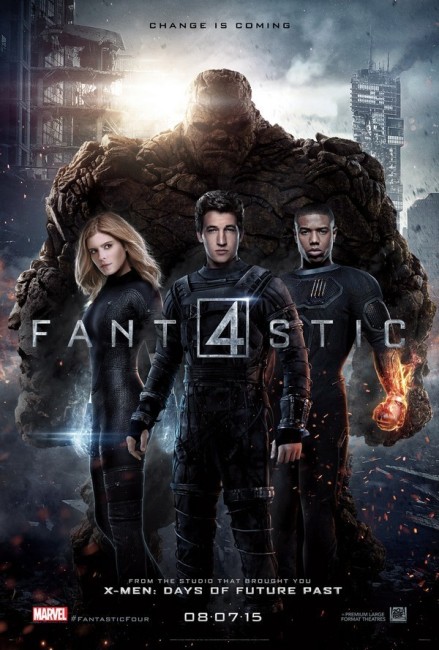 In 2007, Ben Grimm befriends classmate Reed Richards after he finds him searching his parents’ junkyard looking for a transformer. Reed shows Ben the prototype teleportation device he is attempting to build. A few years later, Reed premieres it in the school science fair but is disqualified when it shatters a mirror. Afterwards, he is approached by Dr Franklin Storm who is impressed with Reed’s ability to teleport an object into another dimension. He persuades Reed and Ben to move to the research facility he runs in New York’s Baxter Building. There Reed is taken by Storm’s adopted daughter Sue. Storm also brings on board his son Johnny after he gets in trouble street racing and the troubled Victor Von Doom who built the previous prototype of the device. They successfully transport a monkey into the other dimension. When the higher-ups next want to send someone from NASA, a drunken Reed makes the decision that they should be the ones there first. He, Johnny, Victor and Ben activate the device and successfully transport into the other dimension. They set out to explore the world they find themselves in, only for Victor to be devoured by the energy he stirs up. The others return as an explosion destroys the device. All of them are whisked to a military facility where they find themselves affected in various ways – Reed now has the ability to stretch his limbs, Johnny can become a human fireball, Ben has mutated into a giant rock-like creature, while Sue who was nearby can become invisible and project forcefields. Reed flees the facility and becomes an international fugitive. Recaptured one year later, he is asked to rejoin the project. They open the way again – only to discover a massively changed Victor still alive there.

The Fantastic Four is one of the most popular comic-books from Marvel Comics. The Four first appeared in their self-titled comic-book in 1961, created by Marvel mastermind Stan Lee and the legendary Jack Kirby. The intent at the time was to create a superhero team that could compete with the success enjoyed by rival company DC’s Justice League of America, which had appeared one year before. The Fantastic Four rapidly became one of Marvel’s most popular titles and served to introduce a number of other popular Marvel characters including Sub-Mariner, Ant Man, Black Panther and the Silver Surfer.

Despite their popularity on the printed page, you would not be mistaken if you concluded that the Fantastic Four was a cursed property when it comes to its live-action adaptations. The first of these was The Fantastic Four (1994) where the rights had been obtained by Germany’s Constantin Film who employed Roger Corman to make as low-budget a film as possible with the intention of never releasing it, rather of securing their option on the rights before they lapsed. This version has slipped out onto the internet where the film at least proves more watchable than its reputation has it. Constantin then rode the early 2000s first wave of Marvel screen adaptations with their version of Fantastic Four (2005), followed by the sequel Fantastic Four: Rise of the Silver Surfer (2007). The 2005 Fantastic Four does not have a very good reputation and is usually regarded as a dud among the wave of 2000s Marvel movies. I liked it more than that where it seems to give the characters a fair life and incarnated their superheroics with reasonable regard, even if it was not a version that radiated enormous depths. It was just like a comic-book panel where everything was there on the surface. (I have to say I had far less enthusiasm for Rise of the Silver Surfer).

The Marvel Universe was not launched until after Rise of the Silver Surfer came out with Iron Man (2008), upon which point Marvel mania went utterly massive. Stuck with the rights to the Fantastic Four but not connected to anything else in the Marvel universe, 20th Century Fox and Constantin announced that they were conducting a reboot. (Being Constantin, they naturally waited until right up to the nearing of the expiry on the rights to release the film). It was nevertheless hoped that the reboot would be a success and a sequel was tentatively slated for 2017 and the cast signed for multiple films. To this extent, the Fantastic Four were written as being in their teens and cast with young actors (although of the fivesome, the youngest is actually twenty-eight, while Toby Kebbell comes in as the oldest at age 33) with the assumption that they would grow into their roles. There were even rumours circulating that Fantastic Four would eventually merge with X-Men, the rights to which are also held by 20th Century Fox, although this was denied by producers.

The new Fantastic Four was placed in the hands of Josh Trank, a director who had previously come to attention with his first film, the modest sleeper hit of 20th Century Fox’s Found Footage superpowers film Chronicle (2012). Also on board as producer is Matthew Vaughn, the British director of other comic-book adaptations such as Kick-Ass (2010), X: First Class (2011) and Kingsman: The Secret Service (2015). Trank became deeply involved with recrafting the Fantastic Four and the initial trailer garnered positive response.

However, closer to the release date, problems became apparent. In early 2015, 20th Century Fox demanded reshoots. There were set reports of Trank being moody and uncommunicative. Next there was the announcement four weeks prior to release that the film would not be post-converted to 3D as had been initially planned, showing that the studio had little faith in the film’s prospects. Immediately upon the film’s release to universally negative reviews, Josh Trank tweeted out an announcement that the film on screen was not the one he had envisioned and had been substantially taken away from him (even rumours emerging of him being shut out of the editing process). Stories emerged over the next few days of the studio’s curtailment of several effects sequences and the demands for the addition of other sequences. The blogosphere descended on this like carrion and trashed the film, which performed poorly at the box-office, not even opening in the No 1 spot in its first week of release.

Amidst all of this, I raise a tiny voice of dissent in the crowd and state that I actually enjoyed Fantastic Four 2015 more so than almost everybody out there. It is a flawed film no doubting but those flaws mar what it almost three-quarters of a good one. First of all, you have to commend Josh Trank and co with the approach they have taken. The teenage Fantastic Four did not exactly appeal as a concept but you have to admit that they have done an exemplary job with it. Contrast this to Fantastic Four 2005, which takes a fairly adolescent approach and simply concentrated on giving us a live-action version of the characters in their costumes and with nothing any more complex than that. (You almost get the impression that this has set out to distance itself from the 2005 film in every way – the costumes are ditched, the visual tone is much more sombre and even the way the effects team depicts the superheroics in action is very different).

Josh Trank has aimed to do similar things to what Sony did with their also unsuccessful Spider-Man reboot in The Amazing Spider-Man (2012) and The Amazing Spider-Man 2 (2014) and that is to build on a prior cinematic incarnation and take the characters back to a place where we trace (over the course of presumably several films) their evolution into the familiar comic-book counterparts. Fantastic Four 2015 does an excellent job in building the Four out as characters as opposed to superheroes. Trank made the comment that he saw Fantastic Four as essentially a Cronenbergian film, which puzzled some reviewers. But this is exactly what we have – Fantastic Four 2015 resembles less a Marvel superhero film than it does Cronenberg’s The Fly (1986), which was about a human reaction to a scientific experiment (also involving teleportation) that has resulted in bodily mutation. The film is extremely well cast and all five of the principal actors do an excellent job in delineating their characters.

The three-quarters good bit falls down when it comes to winding the show up. Up until Toby Kebbell came back from Planet Zero, I went with Josh Trank’s vision and had no real complaints with any of the film. Unfortunately, this is about the point where the studio execs see fit the need to wind the show up quickly where we get the final emergence of the Four as a team, a climactic showdown with the villain and the looming destruction of the Earth amid much spectacular mass destruction all in a single extended scene. That it seems hurried and crammed together might be an understatement. Certainly, the effects are of sufficiently epic and spectacular quality but there is ever the sense that the film is hurrying to get everything finished before a predetermined time.

It may well be that we will have to wait to see discarded scenes on the dvd extras and/or the release of the original screenplay, even the unlikely possibility of a director’s cut, to determine what Josh Trank’s original vision would have been. Certainly, what he delivers does not embarrass him in any way, no matter how curtailed a vision of what he originally intended it to be or the gleeful ridicule the blogosphere might pour on it. The sadness of the whole debacle is not unakin to the troubled The Island of Dr Moreau (1996) where the behind the scenes stories of a director losing control and studio interference led to the film’s wide ridicule in the press – if you haven’t seen the amazing documentary Lost Soul: The Doomed Journey of Richard Stanley’s Island of Dr. Moreau (2014) about what happened, go and do so immediately. Josh Trank is one of a new generation of directors who have been propelled to the helm of big-budget studio franchises on the basis of a single indie film that received some acclaim – see also the likes of Gareth Edwards who went from Monsters (2010) to Godzilla (2014) and Colin Trevorrow who went from Safety Not Guaranteed (2012) to Jurassic World (2015). The downside of that is that with a relative unknown running the show it is easier to dismiss them to the scrapheap if the show flops. Look no further than Richard Stanley’s almost complete vanishing from cinema screens subsequent to Dr Moreau.

All of which would be a shame for Josh Trank – alas, the suspicion remains that he will not be heard from again. As it happened, he was removed shortly after from directing a Star Wars film and it took him a further five years to return to the director’s chair with Capone (2020).